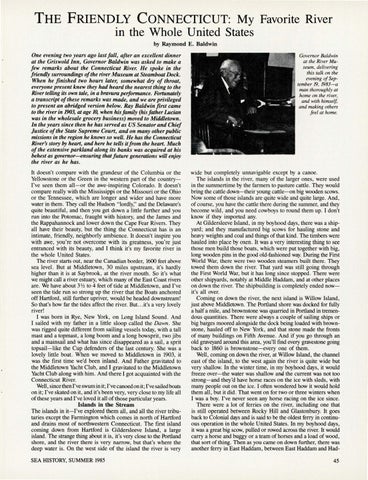 THE FRIENDLY CONNECTICUT: My Favorite River in the Whole United States by Raymond E. Baldwin One evening two years ago last fall, after an excellent dinner at the Griswold Inn, Governor Baldwin was asked to make a few remarks about the Connecticut River. He spoke in the friendly surroundings of the river Museum at Steamboat Dock. When he finished two hours later, somewhat dry of throat, everyone present knew they had heard the nearest thing to the River telling its own tale, in a bravura perfonnance. Forlunately a transcript of these remarks was made, and we are privileged to present an abridged version below. Ray Baldwin first came to the river in 1903, at age IO, when his family (his father Lucian was in the wholesale grocery business) moved to Middletown. In the years since then he has served as US Senator and Chief Justice of the State Supreme Court, and on many other public missions in the region he knows so well. He has the Connecticut River&#39;s story by heart, and here he tells it from the heart. Much of the extensive parkland along its banks was acquired at his behest as governor-ensuring that future generations will enjoy the river as he has. It doesn&#39;t compare with the grandeur of the Columbia or the Yellowstone or the Green in the western part of the countryI&#39;ve seen them all-or the awe-inspiring Colorado. It doesn&#39;t compare really with the Mississippi or the Missouri or the Ohio or the Tennessee, which are longer and wider and have more water in them. They call the Hudson &quot; lordly,&quot; and the Delaware&#39;s quite beautiful , and then you get down a little further and you run into the Potomac, fraught with history, and the James and the Rappahannock and lower down the Cape Fear Rivers. They all have their beauty, but the thing the Connecticut has is an intimate, friendly, neighborly ambience. It doesn&#39;t inspire you with awe, you&#39;re not overcome with its greatness, you&#39;re just entranced with its beauty, and I think it&#39;s my favorite river in the whole United States. The river starts out, near the Canadian border, 1600 feet above sea level. But at Middletown, 30 miles upstream, it&#39;s hardly higher than it is at Saybrook, at the river mouth . So it&#39;s what we might call a river estuary, which many of the East Coast rivers are. We have about 3 1/2 to 4 feet of tide at Middletown, and I&#39;ve seen the tide run so strong up the river that the Boats anchored off Hartford, still further upriver, would be headed downstream! So that&#39;s how far the tides affect the river. But. . .it&#39;s a very lovely river! I was born in Rye, New York, on Long Island Sound . And I sailed with my father in a little sloop called the Dawn . She was rigged quite different from sailing vessels today, with a tall mast and a topmast, a long boom and a long bowsprit, two jibs and a mainsail and what has since disappeared as a sail , a sprit topsail-like the Cup defenders of the last century. She was a lovely little boat. When we moved to Middletown in 1903, it was the first time we&#39;d been inland . And Father gravitated to the Middletown Yacht Club, and I gravitated to the Middletown Yacht Club along with him. And there I got acquainted with the Connecticut River. Well , since then I&#39;ve swum in it; I&#39;ve canoed on it; I&#39;ve sailed boats on it; I&#39;ve skated on it, and it&#39;s been very, very close to my life all of these years and I&#39;ve loved it all of those particular years.

Islands in the Stream The islands in it-I&#39;ve explored them all, and all the river tributaries except the Farmington which comes in north of Hartford and drains most of northwestern Connecticut. The first island coming down from Hartford is Gildersleeve Island, a large island. The strange thing about it is, it&#39;s very close to the Portland shore, and the river there is very narrow, but that&#39;s where the deep water is. On the west side of the island the river is very SEA HISlDRY, SUMMER 1985

Governor Baldwin at the River Museum , delivering this talk on the evening of September 19, 1983-a man thoroughly at home on the river, and with himself, and making others feel at home.

wide but completely unnavigable except by a canoe. The islands in the river, many of the larger ones, were used in the summertime by the farmers to pasture cattle. They would bring the cattle down-their young cattle-on big wooden scows. Now some of those islands are quite wide and quite large. And , of course, you have the cattle there during the summer, and they become wild , and you need cowboys to round them up. I don&#39;t know if they imported any. At Gildersleeve Island , in my boyhood days, there was a shipyard ; and they manufactured big scows for hauling stone and heavy weights and coal and things of that kind . The timbers were hauled into place by oxen . It was a very interesting thing to see those men build those boats, which were put together with big, long wooden pins in the good old-fashioned way. During the First World War, there were two wooden steamers built there. They towed them down the river. That yard was still going through the First World War, but it has long since stopped. There were other shipyards, notably at Middle Haddam, and at other places on down the river. The shipbuilding is completely ended nowit&#39;s all over. Coming on down the river, the next island is Willow Island , just above Middletown. The Portland shore was docked for fully a half a mile, and brownstone was quarried in Portland in tremendous quantities. There were always a couple of sailing ships or big barges moored alongside the dock being loaded with brownstone, hauled off to New York, and that stone made the fronts of many buildings on Fifth Avenue. And if you go through an old graveyard around this area, you&#39;ll find every gravestone going back to 1860 is brownstone-every one of them. Well, coming on down the river, at Willow Island, the channel east of the island, to the west again the river is quite wide but very shallow. In the winter time, in my boyhood days, it would freeze over-the water was shallow and the current was not too strong-and they&#39;d have horse races on the ice with sleds, with many people out on the ice. I often wondered how it would hold them all , but it did . That went on for two or three winters when I was a boy. I&#39;ve never seen any horse racing on the ice since. There were a lot of ferries on the river, including one that is still operated between Rocky Hill and Glastonbury. It goes back to Colonial days and is said to be the oldest ferry in continuous operation in the whole United States. In my boyhood days, it was a great big scow, pulled or rowed across the river. It would carry a horse and buggy or a team of horses and a load of wood, that sort of thing. Then as you came on down further, there was another ferry in East Haddam, between East Haddam and Had-