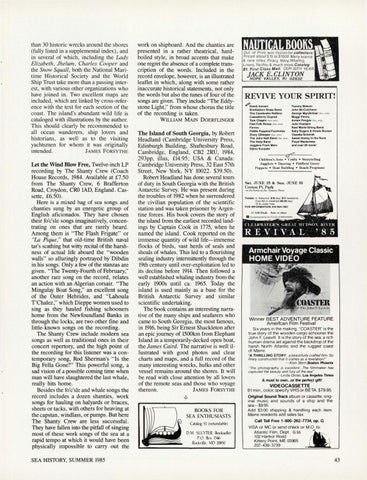 than 30 historic wrecks around the shores (fully listed in a supplemental index) , and in several of which , including the Lady Elizabeth , Jhelum , Charles Cooper and the Snow Squall, both the National Maritime Historical Society and the World Ship Trust take more than a passing interest , with various other organizations who have joined in . Two excellent maps are included , which are linked by cross-reference with the text for each section of the coast. The island&#39;s abundant wild life is cataloged with illustrations by the author. This should clearly be recommended to all ocean wanderers, ship lovers and historians, as well as to the visiting yachtsmen for whom it was originally JAMES FORSYTH E intended . Let the Wind Blow Free, Twelve-inch LP recording by The Shanty Crew (Coach House Records, 1984. Available at £7.50 from The Shanty Crew, 6 Brafferton Road, Croydon, CRO lAD, England . Cassette, £6.50). Here is a mixed bag of sea songs and chanties sung by an energetic group of English aficionados. They have chosen their fo&#39;c&#39;sle songs imaginatively, concentrating on ones that are rarely heard . Among them is &quot;The Flash Frigate&quot; or &quot;La Pique,&quot; that old-time British naval tar&#39;s scathing but witty recital of the harshness of actual life aboard the &quot;wooden walls&quot; so alluringly portrayed by Dibdin in his songs. Only a few of the stanzas are given. &quot;The Twenty-Fourth of February,&quot; another rare song on the record, relates an action with an Algerian corsair. &quot;The Mingulay Boat Song,&quot; an excellent song of the Outer Hebrides, and &quot;Lahoula T&#39;Chalez ,&#39;&#39; which Dieppe women used to sing as they hauled fishing schooners home from the Newfoundland Banks in through the locks, are two other fine and little-known songs on the recording. The Shanty Crew include modern sea songs as well as traditional ones in their concert repertory, and the high point of the recording for this listener was a contemporary song, Rod Sherman&#39;s &quot;Is the Big Fella Gone?&quot; This powerfui song, a sad vision of a possible coming time when man will have slaughtered the last whale, really hits home. Besides the fo&#39;c&#39;sle and whale songs the record includes a dozen shanties, work songs for hauling on halyards or braces, sheets or tacks, with others for heaving at the capstan, windlass, or pumps. But here The Shanty Crew are less successful. They have fallen into the pitfall of singing most of these work songs of the sea at a rapid tempo at which it would have been physically impossible to carry out the SEA HISTORY, SUMMER 1985

work on shipboard . And the chanties are presented in a rather theatrical , hardboiled style, in broad accents that make one regret the absence of a complete transcription of the words. Included in the record envelope, however, is an illustrated leaflet in which , along with some rather inaccurate historical statements, not only the words but also the tunes of four of the songs are given. They include &quot;The Eddystone Light,&quot; from whose chorus the title of the recording is taken. WILLIAM MAIN DOERFLINGER The Island of South Georgia, by Robert Headland (Cambridge University Press, Edinburgh Building, Shaftesbury Road, Cambridge, England , CB2 2RU, 1984, 293pp, illus, £14.95; USA &amp; Canada: Cambridge University Press, 32 East 57th Street, New York , NY 10022. $39.50). Robert Headland has done several tours of duty in South Georgia with the British Antarctic Survey. He was present during the troubles of 1982 when he surrendered the civilian population of the scientific station and was taken prisoner by Argentine forces . His book covers the story of the island from the earliest recorded landings by Captain Cook in 1775, when he named the island. Cook reported on the immense quantity of wild life-immense flocks of birds, vast herds of seals and shoals of whales. This led to a flourishing sealing industry intermittently through the 19th century until over-exploitation led to its decline before 1914. Then followed a well established whaling industry from the early 1900s until ca. 1965. Today the island is used mainly as a base for the British Antarctic Survey and similar scientific undertaking. The book contains an interesting narrative of the many ships and seafarers who came to South Georgia, the most famous, in 1916, being Sir Ernest Shackleton after an epic journey of 1500km from Elephant Island in a temporarily-decked open boat, the James Caird. The narrative is well illustrated with good photos and clear charts and maps, and a full record of the many interesting wrecks, hulks and other vessel remains around the shores. It will be read with close attention by all lovers of the remote seas and those who voyage thereon. JAMES FORSYTHE J.,

Winner BEST ADVENTURE FEATURE American Film Festival Six years in the making , &quot;COASTER&quot; is the true story of the wooden cargo schooner the John F. Leavitt . It is the story of the sea , a rich human drama set against the backdrop of the harsh North Atlantic and the rugged coast of Maine. &quot;A THRILLING STORY... a beautifully crafted film. So finely constructed that it comes as a revelation.I .. - Alan Stern .Boston Phoenix .. The photography is excellent ... The filmmaker has captured the beauty and fury of the sea .. - Linda Gross. Los Angeles Tlmes