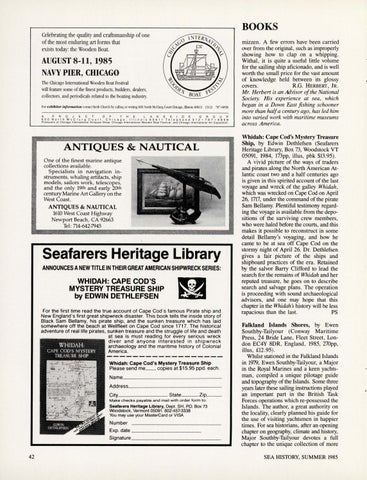 BOOKS Celebrating the quality and craftsmanship of one of the most enduring art forms that exists today: the Wooden Boat.

mizzen . A few errors have been carried over from the original , such as improperly showing how to clap on a whipping. Withal, it is quite a useful little volume for the sailing ship aficionado, and is well worth the small price for the vast amount of knowledge held between its glossy covers. R .G. HERBERT, JR.

WHIDAH: CAPE COD'S MYSTERY TREASURE SHIP by EDWIN DETHLEFSEN For the first time read the true account of Cape Cod 's famous Pirate ship and New England 's first great shipwreck disaster. This book tells the inside story of Black Sam Bellamy, his pirate ship, and the sunken treasure which has laid somewhere off the beach at Wellfleet on Cape Cod since 1717. The historical adventure of real life pirates, sunken treasure and the struggle of life and death .. ..... .. . at sea is must reading for every serious wreck diver and anyone interested in shipwreck • archaeology and the maritime history of Colonial • America . Whidah: Cape Cod's Mystery Treasure Ship

Mr. Herbert is an Advisor of the National Society. His experience at sea, which began in a Down &st fishing schooner more than half a century ago, has led him into varied work with maritime museums across America. Whidah: Cape Cod's Mystery Treasure Ship, by Edwin Dethlefsen (Seafarers Heritage Library, Box 73, Woodstock VT 05091 , 1984, 173pp, illus, pbk $13.95) . A vivid picture of the ways of traders and pirates along the North American Atlantic coast two and a half centuries ago is given in this spirited account of the last voyage and wreck of the galley Whidah , which was wrecked on Cape Cod on April 26, 1717, under the command of the pirate Sam Bellamy. Plentiful testimony regarding the voyage is available from the depositions of the surviving crew members, who were haled before the courts, and this makes it possible to reconstruct in some detail Bellamy 's voyaging, and how he came to be at sea off Cape Cod on the stormy night of April 26. Dr. Dethlefsen gives a fair picture of the ships and shipboard practices of the era. Retained by the salvor Barry Clifford to lead the search for the remains of Whidah and her reputed treasure, he goes on to describe search and salvage plans. The operation is proceeding with sound archaeological advisors, and one may hope that this chapter in the Whidah history will be less rapacious than the last. PS

Falkland Islands Shores, by Ewen Southby-Tailyour (Conway Maritime Press, 24 Bride Lane, Fleet Street, London EC4Y 8DR , England , 1985, 270pp, illus, £12.95) . Whilst stationed in the Falkland Islands in 1979, Ewen Southby-Tailyour, a Major in the Royal Marines and a keen yachtsman, compiled a unique pilotage guide and topography of the Islands. Some three years later these sailing instructions played an important part in the British Task Forces operations which re-possessed the Islands. The author, a great authority on the locality, clearly planned his guide for the use of visiting yachtsmen in happier times. For sea historians, after an opening chapter on geography, climate and history, Major Southby-Tailyour devotes a full chapter to the unique collection of more SEA HIS1DRY, SUMMER 1985