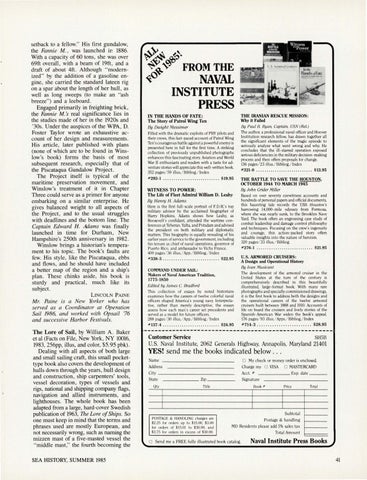 setback to a fellow.&quot; His first gundalow, the Fannie M. , was launched in 1886. With a capacity of 60 tons, she was over 69ft overall , with a beam of 19ft, and a draft of about 4ft. Although &quot; modernized&quot; by the addition of a gasoline engine, she carried the standard lateen rig on a spar about the length of her hull , as well as long sweeps (to make an &quot;ash breeze&quot;) and a leeboard . Engaged primarily in freighting brick, the Fannie M.&#39;s real significance lies in the studies made of her in the 1920s and &#39;30s. Under the auspices of the WPA , D. Foster Taylor wrote an exhaustive account of her design and measurements. His article, later published with plans (none of which are to be found in Winslow&#39;s book) forms the basis of most subsequent research , especially that of the Piscataqua Gundalow Project. The Project itself is typical of the maritime preservation movement , and Winslow&#39;s treatment of it in Chapter Three could serve as a primer for anyone embarking on a similar enterprise. He gives balanced weight to all aspects of the Project , and to the usual struggles with deadlines and the bottom line. The Captain &amp;lward H. Adams was finally launched in time for Durham, New Hampshire&#39;s 250th anniversary in 1982. Winslow brings a historian&#39;s temperament to his topic. The book&#39;s faults are few. His style, like the Piscataqua , ebbs and flows, and he should have included a better map of the region and a ship&#39;s plan. These chinks aside, his book is sturdy and practical , much like its subject. L INCOLN P AINE

Mr. Paine is a New Yorker who has served as a Coordinator at Operation Sail 1986, and worked with Opsail &#39;76 and successive Harbor Festivals.

The Lore of Sail, by William A . Baker et al (Facts on File, New York, NY 10016, 1983, 256pp, illus, and color, $5.95 pbk) . Dealing with all aspects of both large and small sailing craft , this small pockettype book also covers the development of hulls down through the years, hull design and construction, ship carpenters&#39; tools, vessel decoration , types of vessels and rigs, national and shipping company flags, navigation and allied instruments, and lighthouses. The whole book has been adapted from a large, hard-cover Swedish publication of 1963, The Lore of Ships. So one must keep in mind that the terms and phrases used are mostly European, and not necessarily wrong, such as naming the mizzen mast of a five-masted vessel the &quot; middle mast ,&#39;&#39; the fourth becoming the SEA HIS&#39;IORY, SUMMER 1985

IN THE HANDS OF FATE: The Story of Patrol Wing Ten By Dwight Messimer ri lled with the dramatic exploits of PBY pilots and their crews. this fast- paced accou nt of Patrol Wing Ten&#39;s courageous battle against a powerfu l enemy is presented here in full for the first tim e. A striking collection of previously unpublished photographs enhances this fasc inating story. Aviation and World War II enthusiasts and readers with a taste for adventure stories will appreciate this well -written book. 352 pages/ 59 illus./ Bibliog./ lndex

Why it Failed By Paul B. Ryan, Captain, USN (Rel)

#293-1 . ......... ......... ........ $19.95 WITNESS TO POWER: The Life of Fleet Admiral William D. Leahy By Henry H. Adams Here is the first full- scale portrait of ED.R&#39;s top military advisor by the acclaimed biographer of Harry Hopkins. Ada ms shows how Leahy, as Roosevelt&#39;s confidant, attended the wartime conferences at Teheran, Yalta, and Potsdam and advised the president on both military and diplomatic matters. This biography is equall y revealing of his earlier yea rs of service to the government, including his ten ure as chief of naval operations, governor of Puerto Rico, and ambassador to Vichy !&#39;ranee. 400 pages/ 36 illus./ App./ Bibl iog./ lndex

The author. a professional naval officer and Hoover Institution research fellow, has drawn together all the sign ificant elements of the tragic episode to seri ously analyze what went wrong and why. He concludes that the ill -starred operation exposed serious deficiencies in the military decision-makin g process and then offers proposals for change. 136 pages/ 23 illus./Bibliog./ lndex

#321 -0 ........................... $13.95 THE BATTLE TO SAVE THE HOUSTON, OCTOBER 1944 TO MARCH 1945 By John Grider Miller Based on over seventy eyewitness acco un ts and hundreds of personal papers and official documents, this haunting tale records the USS Houston&#39;s harrowing 14,000- mile odyssey from l&#39;orm osa. where she was nearly sunk. to the Brookl yn Navy Yard. The book offers an engrossing case study of combat leadershi p and damage control philosophy and techniques. l&#39;ocusing on the crew&#39;s ingenuity and courage, this ac tion-packed story offers valuable insights into the nature of heroism. 320 pages/ 33 illus./ Bibliog.

#276-1 ........................... 521.95 U.S. ARMORED CRUISERS: A Design and Operational History By Ivan Mu sicant The developm ent of the arm ored cruiser in the United States at the turn of the century is comprehensively descri bed in this beautifull y ill ustrated, large-formal book. With many rare photographs and specially comm issioned draw ings, it is the first book to address both the designs and the operational careers of the twelve arm ored cruisers built between 1888 and 1910. Accounts of life on board the cruisers and lively stories of the Span ish-American War widen the book&#39;s appeal. 176 pages/ 93 illus./Apps./ Bibliog./ lndex

D My check or money order is enclosed