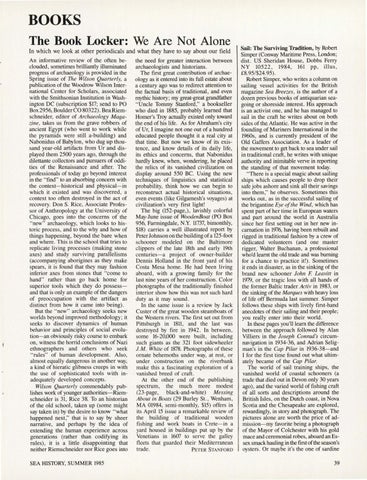 BOOKS The Book Locker: We Are Not Alone In which we look at other periodicals and what they have to say about our field An informative review of the often beclouded, sometimes brilliantly illuminated progress of archaeology is provided in the Spring issue of The Wilson Quarterly, a publication of the Woodrow Wilson International Center for Scholars, associated with the Smithsonian Institution in Washington DC (subscription $17; send to PO Box2956, BoulderC080322). BeaRiemschneider, editor of Archaeology Magazine, takes us from the grave robbers of ancient Egypt (who went to work while the pyramids were still a-building) and Nabonidus of Babylon, who dug up thousand year-old artifacts from Ur and displayed them 2500 years ago, through the dilettante collectors and pursuers of oddities of the Renaissance and after. The professionals of today go beyond interest in the &quot;find&quot; to an absorbing concern with the context-historical and physical-in which it existed and was discovered , a context too often destroyed in the act of recovery. Don S. Rice, Associate Professor of Anthropology at the University of Chicago, goes into the concerns of the &quot; new&quot; archaeology, which looks to historic process, and to the why and how of things happening, beyond the bare when and where. This is the school that tries to replicate living processes (making stone axes) and study surviving parallelisms (accompanying aborigines as they make spears, it is found that they may fashion inferior axes from stones that &quot;come to hand&quot; rather than go back home for superior tools which they do possessand that is only an example of the dangers of preoccupation with the artifact as distinct from how it came into being) . But the &quot;new&quot; archaeology seeks new worlds beyond improved methodology ; it seeks to discover dynamics of human behavior and principles of social evolution-an obviously risky course to embark on, witness the horrid conclusions of Nazi ethnographers and others who seek &quot;rules&quot; of human development. Also, almost equally dangerous in another way, a kind of hieratic glibness creeps in with the use of sophisticated tools with inadequately developed concepts. Wilson Quarterly commendably publishes work of younger authorities-Riemschneider is 31 , Rice 38. To an historian of the old school , taken up (some might say taken in) by the desire to know &quot; what happened next,&quot; that is to say by sheer narrative, and perhaps by the idea of extending the human experience across generations (rather than codifying its rules) , it is a little disappointing that neither Riemschneider nor Rice goes into SEA HISTORY, SUMMER 1985

the need for greater interaction between archaeologists and historians. The first great contribution of archaeology as it entered into its full estate about a century ago was to redirect attention to the factual basis of traditional, and even mythic history; my great-great grandfather &quot; Uncle Tommy Stanford,&quot; a bookseller who died in 1885, probably learned that Homer&#39;s Troy actually existed only toward the end of his life. As for Abraham&#39;s city of Ur, I imagine not one out of a hundred educated people thought it a real city at that time. But now we know of its existence, and know details of its daily life, its ethics and concerns, that Nabonidus hardly knew, when, wondering, he placed the relics of its vanished civilization on display around 550 BC. Using the new techniques of linguistics and statistical probability, think how we can begin to reconstruct actual historical situations, even events (like Gilgamesh&#39;s voyages) at civilization&#39;s very first light! The big (152-page,), lavishly colorful May-June issue of WoodenBoat (PO Box 956, Farmingdale, N.Y. 11737, bimonthly, $18) carries a well illustrated report by Peter Johnson on the building of a 125-foot schooner modeled on the Baltimore clippers of the late 18th and early 19th centuries-a project of owner-builder Dennis Holland in the front yard of his Costa Mesa home. He had been living aboard, with a growing family for the last nine years of her construction. Color photographs of the traditionally finished interior show how this was not such hard duty as it may sound. In the same issue is a review by Jack Custer of the great wooden steamboats of the Western rivers. The first set out from Pittsburgh in 1811, and the last was destroyed by fire in 1942 . In between , some 16-20,000 were built , including such giants as the 321 foot sidewheeler J.M. White of 1878. Photographs of these ornate behemoths under way, at rest, or under construction on the riverbank make this a fascinating exploration of a vanished breed of craft. At the other end of the publishing spectrum , the much more modest (23-page, black-and-white) Messing About in Boats (29 Burley St. , Wenham , MA 01984, semi-monthly, $15) offers in its April 15 issue a remarkable review of the building of traditional wooden fishing and work boats in Crete- in a yard housed in buildings put up by the Venetians in 1607 to serve the galley fleets that guarded their Mediterranean PETER STANFORD trade.

Sail: The Surviving Tradition, by Robert Simper (Conway Maritime Press, London; dist. US Sheridan House, Dobbs Ferry NY 10522 , 1984, 161 pp , illus , ÂŁ8.95/$24.95). Robert Simper, who writes a column on sailing vessel activities for the British magazine Sea Breezes, is the author of a dozen previous books of antiquarian seagoing or shoreside interest. His approach is an activist one, and he has managed to sail in the craft he writes about on both sides of the Atlantic. He was active in the founding of Mariners International in the 1960s, and is currently president of the Old Gaffers Association . As a leader of the movement to get back to sea under sail in traditional craft, he writes with unique authority and inimitable verve in reporting the standing of that movement today. &quot;There is a special magic about sailing ships which causes people to drop their safe jobs ashore and sink all their savings into them ,&quot; he observes. Sometimes this works out , as in the successful sailing of the brigantine Eye of the Wind, which has spent part of her time in European waters and part around the world in Australia since her first setting out in her new incarnation in 1976, having been rebuilt and rigged in traditional fashion by a crew of dedicated volunteers (and one master rigger, Walter Buchanan, a professional who&#39;d l~t the old trade and was burning for a chance to practice it!). Sometimes it ends in disaster, as in the sinking of the brand new schooner John F. Leavitt in 1979, or the tragic loss with all hands of the former Baltic trader Activ in 1983, or the sinking of the Marques with heavy loss of life off Bermuda last summer. Simper follows these ships with lively first-hand anecdotes of their sailing and their people; you really enter into their world . In these pages you&#39;ll learn the difference between the approach followed by Alan Villiers in the Joseph Conrad&#39;s circumnavigation in 1934-36, and Adrian Seligman&#39;s in the Cap Pilar in 1936-38-and I for the first time found out what ultimately became of the Cap Pilar. The world of sail training ships, the vanished world of coastal schooners (a trade that died out in Devon only 30 years ago), and the varied world of fishing craft of all sorts and descriptions around the British Isles, on the Dutch coast, in Nova Scotia and the Chesapeake are explored, rewardingly, in story and photograph. The pictures alone are worth the price of admission-my favorite being a photograph of the Mayor of Colchester with his gold mace and ceremonial robes, aboard an Essex smack hauling in the first of the season&#39;s oysters. Or maybe it&#39;s the one of sardine 39