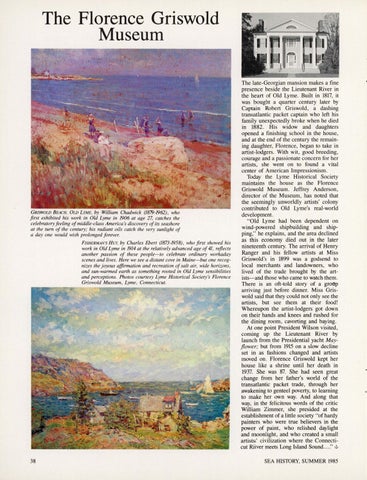 GR!SWOW BEACH, Ow LYME, by William Chadwick (18&#39;iY-1962) , who first exhibited his work in Old Lyme in 1906 at age 27, catches the celebratory feeling of middle-class America&#39;s discovery of its seashore at the turn of the century; his radiant oils catch the very sunlight of a day one would wish prolonged forever. FISHERMAN&#39;S HUT. by Charles Ebert (1873-1958) , who first showed his work in Old Lyme in 1914 at the relatively advanced age of 41, reflects another passion of these people-to celebrate ordinary workaday scenes and lives. Here we see a distant cove in Maine-but one recognizes the joyous affirmation and recreation of salt air, wide horizons, and sun-warmed earth as something rooted in Old Lyme sensibilities and perceptions. Photos courtesy Lyme Historical Society&#39;s Florence Griswold Museum , Lyme, Connecticut.

The late-Georgian mansion makes a fine presence beside the Lieutenant River in the heart of Old Lyme. Built in 1817, it was bought a quarter century later by Captain Robert Griswold, a dashing transatlantic packet captain who left his family unexpectedly broke when he died in 1882. His widow and daughters opened a finishing school in the house, and at the end of the century the remaining daughter, Florence, began to take in artist-lodgers. With wit, good breeding, courage and a passionate concern for her artists, she went on to found a vital center of American Impressionism. Today the Lyme Historical Society maintains the house as the Florence Griswold Museum . Jeffrey Anderson , director of the Museum, has noted that the seemingly unworldly artists&#39; colony contributed to Old Lyme&#39;s real-world development. &quot;Old Lyme had been dependent on wind-powered shipbuilding and shipping,&quot; he explains, and the area declined as this economy died out in the later nineteenth century. The arrival of Henry Ranger and his fellow artists at Miss Griswold&#39;s in 1899 was a godsend to local merchants and landowners, who lived of the trade brought by the artists-and those who came to watch them . There is an oft-told story of a grottp arriving just before dinner. Miss Griswold said that they could not only see the artists, but see them at their food! Whereupon the artist-lodgers got down on their hands and knees and rushed for the dining room, cavorting and baying. At one point President Wilson visited , coming up the Lieutenant River by launch from the Presidential yacht Mayflower; but from 1915 on a slow decline set in as fashions changed and artists moved on. Florence Griswold kept her house like a shrine until her death in 1937. She was &#39;07. She had seen great change from her father&#39;s world of the transatlantic packet trade, through her awakening to genteel poverty, to learning to make her own way. And along that way, in the felicitous words of the critic William Zimmer, she presided at the establishment of a little society &quot;of hardy painters who were true believers in the power of paint , who relished daylight and moonlight, and who created a small artists;&#39; civilization where the Connecticut Riiver meets Long Island Sound ....&quot; J.. SEA HIS&#39;IDRY, SUMMER 1985