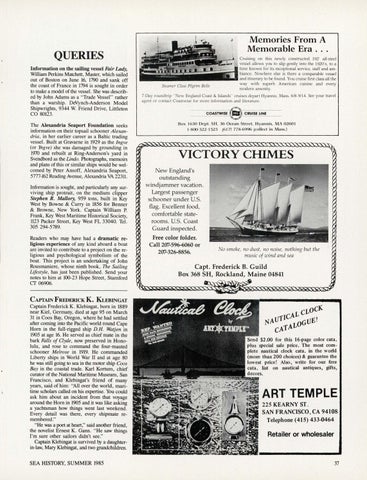 QUERIES Information on the sailing vessel Fair Lady, William Perkins Matchett, Master, which sailed out of Boston on June 16, 1790 and sank off the coast of France in 1794 is sought in order to make a model of the vessel. She was described by John Adams as a " Trade Vessel" rather than a warship. DeVynch-Anderson Model Shipwrights, 9344 W. Friend Drive, Littleton co 80123. The Alexandria Seaport Foundation seeks information on their topsail schooner Ale.xandria, in her earlier career as a Baltic trading vessel. Built at Gravarne in 1929 as the /ngve (or lhgve) she was damaged by grounding in 1970 and rebuilt at Ring-Anderson's yard in Svendbord as the lindo. Photographs, memoirs and plans of this or similar ships would be welcomed by Peter Ansoff, Alexandria Seaport, 5777-162 Reading Avenue, Alexandria VA 22311. Information is sought, and particularly any surviving ship protrait, on the medium clipper Stephen R. Mallory, 959 tons, built in Key West by Bowne & Curry in 1856 for Benner & Browne, New York. Captain William P. Frank, Key West Maritime Historical Society, 1123 Pllcker Street, Key West FL 33040. Tel. 305 294-5789. Readers who may have had a dramatic religious experience of any kind aboard a boat are invited to contribute to a project on the religious and psychological symbolism of the boat. This project is an undertaking of John Rousmaniere, whose ninth book, The Sailing Lifestyle, has just been published. Send your notes to him at 100-23 Hope Street, Stamford CT 06906. CAPTAIN FREDERICK K. KLEBINGAT Captain Frederick K. Klebingat, born in 1889 near Kiel , Germany, died at age 95 on March 31 in Coos Bay, Oregon, where he had settled after corning into the Pllcific world round Cape Horn in the full-rigged ship D.H. Watjen in 1905 at age 16. He served as chief mate in the bark Falls of Clyde, now preserved in Honolulu , and rose to command the four-masted schooner Melrose in 1919. He commanded Liberty ships in World War II and at age 80 he was still going to sea in the motor ship Coos Bay in the coastal trade. Karl Kortum, chief curator of the National Maritime Museum, San Francisco, and Klebingat's friend of many years,. said of him: "All over the world, maritime scholars called on his expertise. You could ask him about an incident from that voyage around the Horn in 1905 and it was like asking a yachtsman how things went last weekend. Every detail was there, every shipmate remembered." "He was a poet at heart;' said another friend, the novelist Ernest K. Gann. "He saw things I'm sure other sailors didn't see." Captain Klebingat is survived by a daughterin-law, Mary Klebingat, and two grandchildren . SEA HISTORY, SUMMER 1985

Memories From A Memorable Era ... Cruising on thi s newly constructed 192' all-steel vessel allows you to slip gentl y into the 1920's, to a time known for its exceptional service, staff and ambiance. Now here else is there a comparable vessel and itinerary to be found. You crui se first class all the way with superb Ame rican cuisine and every modern amenity.

Send $2 .00 for this 16-page color cata. plus special sale price. The most complete nautical clock cata. in the world (more than 200 choices) & guarantee the lowest price! Also, write for our free cata. list on nautical antiques, gifts, decors.