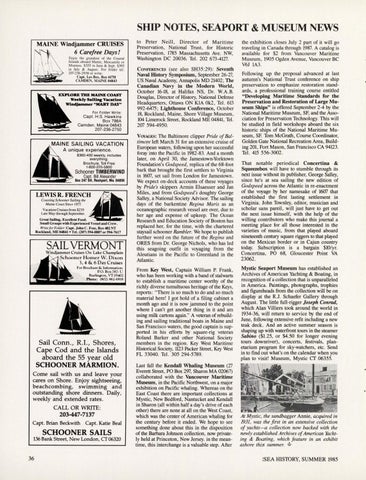 Enjoy the grandeu r of the Coastal Islands aboard Mattie , Mercantile or Mistress. $355 in June &amp; Sept. $395

to Peter Neill, Director of Maritime Preservation, National Trust, for Historic Preservation, 1785 Massachusetts Ave. NW, Washington DC 20036. Tel. 202 673-4127. CONFERENCES (see also SH35:29) : Seventh Naval History Symposium, September 26-Tl, US Naval Academy, Annapolis MD 21402; The Canadian Navy in the Modern World, October 16-18, at Halifax NS, Dr. W.A.B. Douglas, Director of History, National Defense Headquarters, Ottawa ON KIA Ok2 , Tel. 613 992-6475; Lighthouse Conference, October 18, Rockland , Maine, Shore Village Museum, 104 Limerock Street, Rockland ME 04841, Tel. Wl 594-4950. VOYAGES: The Baltimore clipper Pride of Baltimore left March 31 for an extensive cruise of European waters, following upon her successful foray into the Pacific in 1982-83. And a month later, on April 30, the Jamestown-Yorktown Foundation&#39;s Godspeed, replica of the 68-foot bark that brought the first settlers to Virginia in 1607, set sail from London for Jamestown. We expect on-deck accounts of these voyages by Pride&#39;s skippers Armin Elsaesser and Jan Miles, and from Godspeed&#39;s doughty George Salley, a National Society Advisor. The sailing days of the barkentine Regina Maris as an oceanographic research vessel are over, due to her age and expense of upkeep. The Ocean Research and Education Society of Boston has replaced her, for the time, with the chartered staysail schooner Rambler. We hope to publish further word on the future of the Regina and ORES from Dr. George Nichols, who has led this seagoing outfit in voyaging from the Aleutians in the Pacific to Greenland in the Atlantic. From Key West, Captain William P. Frank, who has been working with a band of stalwarts to establish a maritime center worthy of the richly diverse tumultuous heritage of the Keys, reports : &quot; There is so much to do and so much material here! I got hold of a filing cabinet a month ago and it is now jammed to the point where I can&#39;t get another thing in it and am using milk cartons again.&quot; A veteran of rebuilding and sailing traditional boats in Maine and San Francisco waters, the good captain is supported in his efforts by square-rig veteran Roland . Barker and other National Society members in the region. Key West Maritime Historical Society, 1123 Packer Street, Key West FL 33040. Tel. 305 294-5789. Last fall the Kendall Whaling Museum (Tl Everett Street, PO Box 2fJ7, Sharon MA 02067) collaborated with the Vancouver Maritime Museum, in the Pacific Northwest, on a major exhibition on Pacific whaling. Whereas on the East Coast there are important collections at Mystic, New Bedford, Nantucket and Kendall in Sharon (all within half a day&#39;s drive of each other) there are none at all on the West Coast, which was the center of American whaling for the century before it ended . We hope to see something done about this in the disposition of the Barbara Johnson collection, now privately held at Princeton, New Jersey. in the meantime, this interchange is a valuable step. After

the exhibition closes July 2 part of it will go traveling in Canada through 1987. A catalog is available for $2 from Vancouver Maritime Museum, 1905 Ogden Avenue, Vancouver BC V6J 1A3. Following up the proposal advanced at last autumn&#39;s National Trust conference on ship preservation to emphasize restoration standards, a professional training course entitled &quot;Developing Maritime Standards for the Preservation and Restoration of Large Museum Ships&quot; is offered September 2-4 by the National Maritime Museum, SF, and the Association for Preservation Technology. This will pe studied in field workshops aboard the six historic ships of the National Maritime Museum, SF. Tom McGrath, Course Coordinator, Golden Gate National Recreation Area, Building 201, Fort Mason, San Francisco CA 94123. Tel. 415 556-3002. That notable periodical Concertina &amp; Squeezebox will have to stumble through its next issue without its publisher, George Salley, since he&#39;s at sea sailing the new edition of Godspeed across the Atlantic in re-enactment of the voyage by her namesake of 1607 that established the first lasting settlement in Virginia. John Townley, editor, musician and scholar sans pareil , will just have to get out the next issue himself, with the help of the willing contributors who make this journal ·a meeting place for all those interested in tlie varieties of music, from that played aboard nineteenth century square riggers to that played on the Mexican border or in Cajun country today. Subscription is a bargain $10/yr. Concertina, PO 68, Gloucester Point VA 23062. Mystic Seaport Museum has established an Archives of American Yachting &amp; Boating, in recognition of a collection that is unparalleled in America. Paintings, photographs, trophies and figureheads from the collection will be on display at the R.J. Schaefer Gallery through August. The little full-rigger Joseph Conrad, which Alan Villiers took around the world in 1934-36, will return to service by the end of June, following extensive refit including a new teak deck. And an active summer season is shaping up with waterfront tours in the steamer Sabino ($1.25, or $4.50 for longer evening tours downriver), concerts, festivals, planetarium program for sky-watchers, etc. Send in to find out what&#39;s on the calendar when you plan to visit! Museum, Mystic CT 06355.

At Mystic, the sandbagger Annie, acquired in 1931, was the first in an extensive collection of yachts-a collection now backed with the newly established Archives of American &#39;fuchting &amp; Boating , which feature in an exhibit ashore thiJS summer. .t ~SEA