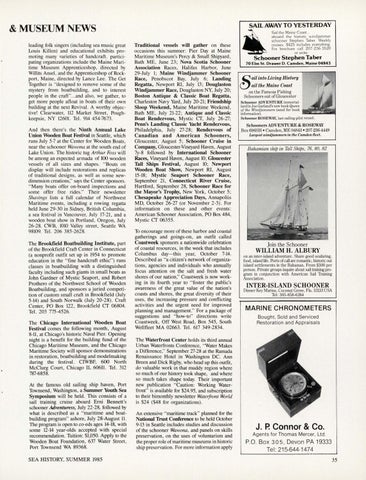 SAIL AWAY TO YESTERDAY

&amp; MUSEUM NEWS leading folk singers (including sea music great Louis Killen) and educational exhibits promoting many varieties of handcraft . participating organizations include the Maine Maritime Museum Apprenticeshop, directed by Willits Ansel , and the Apprenticeshop of Rockport , Maine, directed by Lance Lee. The Get Together is &quot;designed to remove some of the mystery from boatbuilding, and to interest people in the craft&quot;... and also, we gather, to get more people afloat in boats of their own building at the next Revival. A worthy objective! Clearwater, 112 Market Street, Poughkeepsie, NY 12601. Tel. 914 454-7673. And then there&#39;s the Ninth Annual Lake Union Wooden Boat Festival in Seattle, which runs July 5-7 at the Center for Wooden Boats, near the schooner Wawona at the south end of Lake Union. The historic tug Arthur Foss will be among an expected armada of 100 wooden vessels of all sizes and shapes. &quot; Boats on display will include restorations and replicas of traditional designs , as well as some newdimension creations,&#39;&#39; says the Center sponsors. &quot; Many boats offer on-board inspections and some offer free rides.&quot; Their newsletter Shavings lists a full calendar of Northwest Maritime events, including a rowing regatta held June 29-30 in Sidney, British Columbia, a sea festival in Vancouver, July 17-21, and a wooden boat show in Portland , Oregon, July 26-28. CWB, 1010 Valley street, Seattle WA 98109. Tel. 206 385-2628. The Brookfield Boatbuilding Institute, part of the Brookfield Craft Center in Connecticut (a nonprofit outfit set up in 1954 to promote education in the &quot; fine handcraft ethic&quot;) runs classes in boatbuilding with a distinguished faculty including such giants in small boats as John Gardner of Mystic Seaport, and Robert Prothero of the Northwest School of Wooden Boatbuilding, and sponsors a juried competition of custom small craft in Brookfield (July 5-14) and South Norwalk (July 20-28). Craft Center, PO Box 122, Brookfield CT 06804. Tel. 203 775-4526. The Chicago International Wooden Boat Festival comes the following month , Augu st 8-11 , at Chicago&#39;s historic Naval Pier. Opening night is a benefit for the building fund of the Chicago Maritime Museum, and the Chicago Maritime Society will sponsor demonstrations in restoration , boatbuilding and modelmaking during the festival. CIWBF, 600 North McClurg Court, Chicago IL 60611. Tel. 312 787-6858. At the famous old sailing ship haven, Port Townsend, Washington, a Summer Youth Sea Symposium will be held. This consists of a sail training cruise aboard Erni Bennett&#39;s schooner Adventuress, July 22-28, followed by what is described as a &quot; maritime and boatbuilding program&quot; ashore, July 28-August II. The program is open to co-eds ages 14-18, with some 12-14 year-olds accepted with special recommendation. Tuition: $1,050. Apply to the Wooden Boat Foundation, 637 Water Street, Port Townsend WA 89368. SEA HISTORY, SUMMER 1985

on the Famous Fishing Schooners out of Gloucester

The Waterfront Center holds its third annual Urban Waterfronts Conference, &quot;Water Makes a Difference,&#39;&#39; September 27-28 at the Ramada Renaissance Hotel in Washington DC. Ann Breen and Dick Rigby, who head up this outfit, do valuable work in that muddy region where so much of our history took shape, and where so much takes shape today. Their important new publication &quot;Caution: Working Waterfront&quot; is available for $24. 95, and subscription to their bimonthly newsletter Waterfront World is $24 ($48 for organizations). An extensive &quot;maritime track&quot; planned for the National Trust Conference to be held October 9-13 in Seattle includes studies and discussion of the schooner Uilwona , and panels on skills preservation, on the uses of voluntarism and the proper role of maritime museums in historic ship preservation. For more information apply