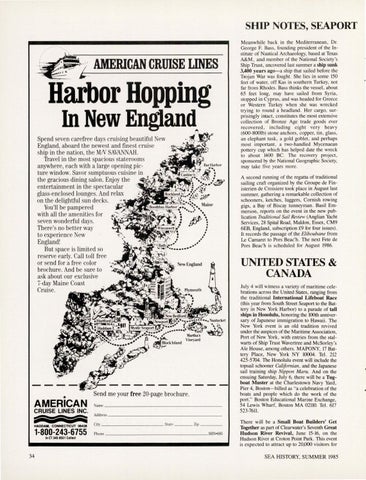 Harbor Hopping In New England Spend seven carefree days cruising beautiful New England, aboard the newest and finest cruise ship in the nation, the M/V SAVANNAH. Travel in the most spacious staterooms anywhere, each with a large opening picture window. Savor sumptuous cuisine in the gracious dining salon. Enjoy the entertainment in the spectacular glass-enclosed lounges. And relax on the delightful sun decks. ..........You &#39;ll be pampered with all the amenities fo r seven wonderful days. There&#39;s no better way to experience New England! But space is limited so reserve early. Call toll free or send for a free color brochure. And be sure to ask about our exclusive 7-day Maine Coast Cruise.

Send me your free 20-page brochure.

Meanwhile back in the Mediterranean , Dr. George F. Bass, fo unding president of the Institute of Nautical Archaeology, based at Texas A&amp;M , and member of the National Society&#39;s Ship Trust, uncovered last summer a ship sunk 3,400 years ago-a ship that sailed before the Tmjan War was foug ht. She lies in some 150 feet of water, off Kas in southern Turkey, not far from Rhodes. Bass thinks the vessel , about 65 feet long, may have sailed from Syria , stopped in Cyprus, and was headed for Greece or Western Turkey when she was wrecked trying to round a headland. Her cargo, surprisingly intact, constitutes the most extensive collection of Bronze Age trade goods ever recovered , including eight very heavy (600-800lb) stone anchors, copper, tin , glass, an elephant tusk, a go ld goblet, and perhaps most important, a two-handled Mycenaean pottery cup which has helped date the wreck to about 1400 BC. The recovery project, sponsored by th~ National Geographic Society, may take five years more. A second running of the regatta of traditional sailing craft organized by the Groupe de Finisterien de Croisiere took place in August last summer, gathering a remarkable collection of schooners, ketches, luggers, Cornish rowing gigs, a Bay of Biscay tunneyman. Basil Emmerson, reports on the event in the new publication Traditional Sail Review (Anglian Yacht Services, 28 Spital Road, Maldon, Essex , CM9 6EB, England, subscription £9 for four issues). It records the passage of the Eliboubane from Le Camaret to Pors Beac&#39; h. The next Fete de Pors Beac&#39;h is scheduled for August 1986.

UNITED STATES &amp; CANADA July 4 will witness a variety of maritime celebrations across the United States, ranging from the traditional International Lifeboat Race (this year from South Street Seaport to the Battery in New York Harbor) to a parade of tall ships in Honolulu, honoring the IOOth anniversary of Japanese immigration to Hawaii . The New York event is an old tradition revived under the auspices of the Maritime Association, Port of New York, with entries from the stalwarts of Ship Trust Wavertree and McSorley&#39;s Ale House, among others. MAPONY, 17 Battery Place, New York NY 10004. Tel. 212 425-5704. The Honolulu event will include the topsail schooner Californian, and the Japanese sail training ship Nippon Maru . And on the ensuing Saturday, July 6, there will be a Tugboat Muster at the Charlestown Navy Yard , Pier 4, Boston-billed as &quot;a celebration of the boats and people which do the work of the port .&quot; Boston Educational Marine Exchange, 54 Lewis Wharf, Boston MA 02110. Tel. 617 523-76 11. There will be a Small Boat Builders&#39; Get Together as part of Clearwater&#39;s Seventh Great Hudson River Revival , June 15-16, on the Hudso n River at Croton Point Park. This event is expected to attract up to 20,000 visitors for SEA HISlDRY, SUMMER 1985