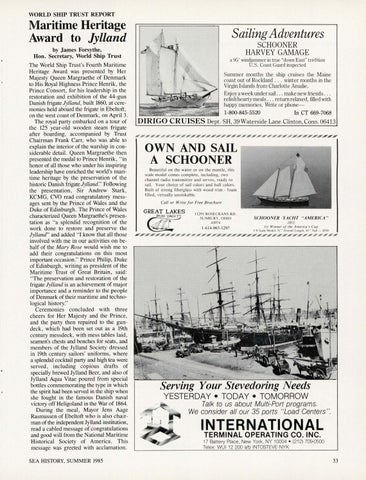 by James Forsythe, Hon. Secretary, World Ship Trust The World Ship Trust&#39;s Fourth Maritime Heritage Award was presented by Her Majesty Queen Margraethe of Denmark to His Royal Highness Prince Henrik , the Prince Consort , for his leadership in the restoration and exhibition of the 44-gun Danish frigate Jylland, built 1860, at ceremonies held aboard the frigate in Ebeltoft, on the west coast of Denmark, on April 3 . The royal party embarked on a tour of the 125 year-old wooden steam frigate after boarding, accompanied by Trust Chairman Frank Carr, who was able to explain the interior of the warship in considerable detail. Queen Margraethe then presented the medal to Prince Henrik, &quot;in honor of all those who under his inspiring leadership have enriched the world&#39;s maritime heritage by the preservation of the historic Danish frigate Jylland.&quot; Following the presentation , Sir Andrew Stark, KCMG, CVO read congratulatory messages sent by the Prince of Wales and the Duke of Edinburgh. The Prince of Wales characterized Queen Margraethe&#39;s presentation as &quot;a splendid recognition of the work done to restore and preserve the Jylland&quot; and added &quot; I know that all those involved with me in our activities on behalf of the Mary Rose would wish me to add their congratulations on this most important occasion.&quot; Prince Philip, Duke of Edinburgh, writing as president of the Maritime Trust of Great Britain, said : &quot; The preservation and restoration of the frigate Jylland is an achievement of major importance and a reminder to the people of Denmark of their maritime and technological history.&quot; Ceremonies concluded with three cheers for Her Majesty and the Prince, and the party then repaired to the gundeck , which had been set out as a 19th century messdeck, with mess tables laid , seamen&#39;s chests and benches for seats, and members of the Jylland Society dressed in 19th century sailors&#39; uniforms , where a splendid cocktail party and high tea were served, including copious drafts of specially brewed Jylland Beer, and also of Jylland Aqua Vitae poured from special bottles commemorating the type in which the spirit had been served in the ship when she fought in the famous Danish naval victory off Heligoland in the War of 1864. During the meal, Mayor Jens Aage Rasmussen of Ebeltoft who is also chairman of the independent Jylland institution , read a cabled message of congratulations and good will from the National Maritime Historical Society of America. This message was greeted with acclamation. SEA HISTORY, SUMMER 1985

Serving Your Stevedoring Needs YESTERDAY • TODAY • TOMORROW Talk to us about Multi-Port programs. We consider all our 35 ports &quot; Load Centers &quot;.