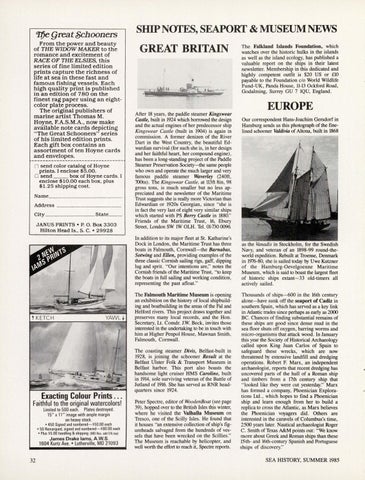 &#39;Tge great $chooners From the power and beauty of THE WIDOW MAKER to the romance and excitement of RACE OF THE ELSIES, this series of fine limited edition prints capture the richness of life at sea in these fast and famous fishing vessels. Each high quality print is published in an edition of 780 on the finest rag paper using an eightcolor plate process. The original publishers of marine artist Thomas M. Hoyne, F.A.S.M.A., now make available note cards depicting &quot;The Great Schooners&quot; series of his limited edition prints. Each gift box contains an assortment of ten Hoyne cards and envelopes. LI send color catalog of Hoyne prints. I enclose $5.00.

After 18 years, the paddle steamer Kingswear Castle, built in 1924 which borrowed the design and the actual engines of her predecessor ship Kingswear Castle (built in 1904) is again in commission. A former denizen of the River Dart in the West Country, the beautiful Edwardian survival (for such she is, in her design and her faithful heart, her compound engine) , has been a long-standing project of the Paddle Steamer Preservation Society-the same people who own and operate the much larger and very famous paddle steamer Waverley (240ft, 700tn) . The Kingswear Castle, at ll3ft Sin, 98 gross tons, is much smaller but no Jess appreciated and the newsletter of the Maritime Trust suggests she is really more Victorian than Edwardian or 1920s Georgian, since &quot;she is in fact the very last of eight very similar ships which started with PS Berry Castle in 1880.&quot; Friends of the Maritime Trust, 16, Ebury Street, London SW lW OLH. Tel. 01-730 0096. In addition to its major fleet at St. Katharine&#39;s Dock in London, the Maritime Trust has three boats in Falmouth, Cornwall-the Barnabas, Sotwing and Ellen, providing examples of the three classic Cornish sailing rigs, gaff, dipping lug and sprit. &quot;Our intentions are,&quot; notes the Cornish friends of the Maritime Trust, &quot;to keep the boats in full sailing and working condition, representing the past afloat.&quot; The Fahnouth Maritime Museum is opening an exhibition on the history oflocal shipbuilding and boatbuilding in the areas of the Fa! and Helford rivers. This project draws together and preserves many local records, and the Hon. Secretary, U. Comdr. J.W. Beck, invites those interested in the undertaking to be in touch with him at Higher Penpol House, Mawnan Smith , Falmouth, Cornwall. The coasting steamer Divis, Belfast-built in 1928, is joining the schooner Result at the Belfast Ulster Folk &amp; Transport Museum in Belfast harbor. This port also boasts the handsome light cruiser HMS Caroline, built in 1914, sole surviving veteran of the Battle of Jutland of 1916. She has served as RNR headquarters since 1924.

Peter Spectre, editor of WoodenBoat (see page 39), hopped over to the British Isles this winter, where he visited the Valhalla Museum on Tresco, one of the Scilly Isles. He found that it houses &quot;an extensive collection of ship&#39;s figureheads salvaged from the hundreds of vessels that have been wrecked on the Scillies.&quot; The Museum is reachable by helicopter, and well \\Urth the effurt to reach it, Spectre reports.

The Falkland Islands Foundation, which watches over the historic hulks in the islands as well as the island ecology, has published a valuable report on the ships in their latest newsletter. Membership in this dedicated and highly competent outfit is $20 US or £10 payable to the Foundation c/o World Wildlife Fund-UK, Panda House, 11-13 Ockford Road, Godalming, Surrey GU 7 IQU, England .

EUROPE Our correspondent Hans-Joachim Gersdorf in Hamburg sends us this photograph of the finelined schooner Valdivia of Altona, built in 1868

as the Vanadis in Stockholm, for the Swedish Navy, and veteran of an 1898-99 round-the\\Urld expedition. Rebuilt at Troense, Denmark in 1976-80, she is sailed today by Uwe Kutzner of the Hamburg-Oevelgoenne Maritime Museum, which is said to boast the largest fleet of historic ships extant-33 old-timers all actively sailed. Thousands of ships-600 in the 16th century alone-have sunk off the seaport of Cadiz in southern Spain, which has served as a key link in Atlantic trades since perhaps as early as 2000 BC. Chances of finding substantial remains of these ships are good since dense mud in the sea floor shuts off oxygen, barring worms and micro-organisms that attack wood. In January this year the Society of Historical Archaeology called upon King Juan Carlos of Spain to safeguard these wrecks, which are now threatened by extensive landfill and dredging operations. Robert F. Marx, an independent archaeologist, reports that recent dredging has uncovered parts of the hull of a Roman ship and timbers from a 17th century ship that &quot;looked like they were cut yesterday.&quot; Marx has formed a company, Phoenician Explorations Ud., which hopes to find a Phoenician ship and learn enough from her to build a replica to cross the Atlantic, as Marx believes the Phoenician voyagers did . Others are interested in the caravels of Columbus&#39;s time, 2500 years later. Nautical archaeologist Roger C. Smith of Texas A&amp;M points out: &quot; We know !Illore about Greek and Roman ships than these !Sith- and 16th-century Spanish and Portuguese sh1ips of discovery.&quot; SEA HISIDRY, SUMMER 1985