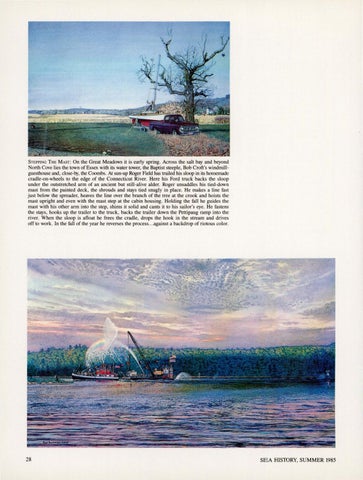 MAST: On the Great Meadows it is early spring. Across the salt bay and beyond North Cove lies the town of Essex with its water tower, the Baptist steeple, Bob Croft's windrnillguesthouse and, close-by, the Coombs. At sun-up Roger Field has trailed his sloop in its homemade cradle-on-wheels to the edge of the Connecticut River. Here his Ford truck backs the sloop under the outstretched arm of an ancient but still-alive alder. Roger unsaddles his tied-down mast from the painted deck, the shrouds and stays tied snugly in place. He makes a line fast just below the spreader, heaves the line over the branch of the tree at the crook and hoists the mast upright and even with the mast step at the cabin housing. Holding the fall he guides the mast with his other arm into the step, shims it solid and cants it to his sailor's eye. He fastens the stays, hooks up the trailer to the truck, backs the trailer down the Pettipaug ramp into the river. When the sloop is afloat he frees the cradle, drops the hook in the stream and drives off to work. In the fall of the year he reverses the process ...against a backdrop of riotous color. STEPPING THE