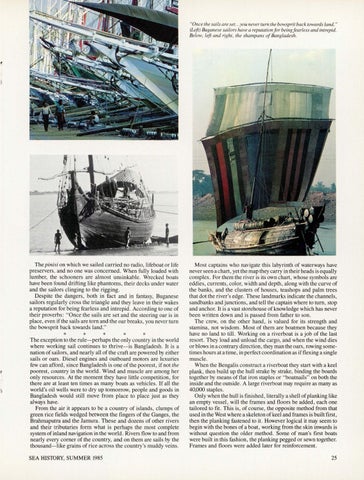 &quot;Once the sails are set .. .you never turn the bowsprit back towards land. &quot; (Left) Buganese sailors have a reputation for being fearless and intrepid. Below, left and right, the shampans of Bangladesh.

The pinisi on which we sailed carried no radio, lifeboat or life preservers, and no one was concerned. When fully loaded with lumber, the schooners are almost unsinkable. Wrecked boats have been found drifting like phantoms, their decks under water and the sailors clinging to the rigging. Despite the dangers, both in fact and in fantasy, Buganese sailors regularly cross the triangle and they leave in their wakes a reputation for being fearless and intrepid . According to one of their proverbs : &quot; Once the sails are set and the steering oar is in place, even ifthe sails are torn and the oar breaks , you never turn the bowsprit back towards land .&quot;

The exception to the rule-perhaps the only country in the world where working sail continues to thrive-is Bangladesh. It is a nation of sailors, and nearly all of the craft are powered by either sails or oars. Diesel engines and outboard motors are luxuries few can afford, since Bangladesh is one of the poorest, if not the poorest, country in the world . Wind and muscle are among her only resources. At the moment they have little competition, for there are at least ten times as many boats as vehicles. If all the world&#39;s oil wells were to dry up tomorrow, people and goods in Bangladesh would still move from place to place just as they always have. From the air it appears to be a country of islands, clumps of green rice fields wedged between the fingers of the Ganges , the Brahmaputra and the Jamura . These and dozens of other rivers and their tributaries form what is perhaps the most complete system of inland navigation in the world. Rivers flow to and from nearly every corner of the country, and on them are sails by the thousand-like grains of rice across the country&#39;s muddy veins. SEA HISTORY, SUMMER 1985

Most captains who navigate this labyrinth of waterways have never seen a chart, yet the map they carry in their heads is equally complex. For them the river is its own chart, whose symbols are eddies, currents, color, width and depth , along with the curve of the banks, and the clusters of houses, teashops and palm trees that dot the river&#39;s edge. These landmarks indicate the channels, sandbanks and junctions, and tell the captain where to turn , stop and anchor. It is a vast storehouse of knowledge which has never been written down and is passed from father to son. The crew, on the other hand , is valued for its strength and stamina, not wisdom . Most of them are boatmen because they have no land to till . Working on a riverboat is a job of the last resort . They load and unload the cargo, and when the wind dies or blows in a contrary direction , they man the oars, rowing sometimes hours at a time, in perfect coordination as if flexing a single muscle. When the Bengalis construct a riverboat they start with a keel plank, then build up the hull strake by strake, binding the boards together by means of flat iron staples or &quot; boatnails&quot; on both the inside and the outside. A large riverboat may require as many as 40,000 staples. Only when the hull is finished, literally a shell of planking like an empty vessel, will the frames and floors be added, each one tailored to fit. This is, of course, the opposite method from that used in the West where a skeleton of keel and frames is built first , then the planking fastened to it. However logical it may seem to begin with the bones of a boat, working from the skin inwards is without question the older method . Some of man&#39;s first boats were built in this fashion, the planking pegged or sewn together. Frames and floors were added later for reinforcement. 25