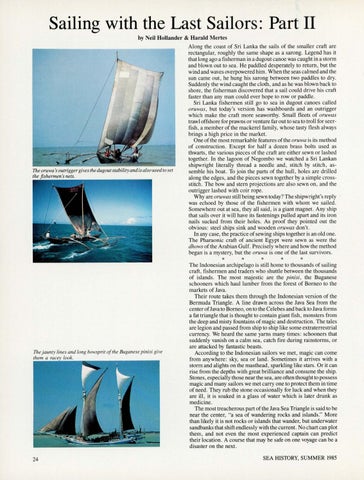 Sailing with the Last Sailors: Part II by Neil Hollander &amp; Harald Mertes Along the coast of Sri Lanka the sails of the smaller craft are rectangular, roughly the same shape as a sarong. Legend has it that long ago a fisherman in a dugout canoe was caught in a storm and blown out to sea. He paddled desperately to return, but the wind and waves overpowered him. When the seas calmed and the sun came out, he hung his sarong between two paddles to dry. Suddenly the wind caught the cloth , and as he was blown back to shore, the fisherman discovered that a sail could drive his craft faster than any man could ever hope to row or paddle. Sri Lanka fishermen still go to sea in dugout canoes called oruwas, but today&#39;s version has washboards and an outrigger which make the craft more seaworthy. Small fleets of oruwas traw 1offshore for prawns or venture far out to sea to troll for seerfish, a member of the mackerel family, whose tasty flesh always brings a high price in the market. One of the most remarkable features of the oruwa is its method of construction. Except for half a dozen brass bolts used as thwarts, the various pieces of the craft are either sewn or lashed together. In the lagoon of Negombo we watched a Sri Lankan shipwright literally thread a needle and , stitch by stitch, asThe oruwa&#39;s outrigger gives the dugout stability and is also used to set semble his boat. To join the parts of the hull , holes are drilled the fishermen&#39;s nets. along the edges, and the pieces sewn together by a simple crossstitch . The bow and stern projections are also sewn on, and the outrigger lashed with coir rope. Why are oruwas still being sewn today? The shipwright&#39;s reply was echoed by those of the fishermen with whom we sailed . Somewhere out at sea, they all said, is a giant magnet. Any ship that sails over it will have its fastenings pulled apart and its iron nails sucked from their holes . As proof they pointed out the obvious: steel ships sink and wooden oruwas don&#39;t. In any case, the practice of sewing ships together is an old one. The Pharaonic craft of ancient Egypt were sewn as were the dhows of the Arabian Gulf. Precisely where and how the method began is a mystery, but the oruwa is one of the last survivors.

The jaunty lines and long bowsprit of the Buganese pinisi give them a racey look.

The Indonesian archipelago is still home to thousands of sailing craft, fishermen and traders who shuttle between the thousands of islands. The most majestic are the pinisi , the Buganese schooners which haul lumber from the forest of Borneo to the markets of Java. Their route takes them through the Indonesian version of the Bermuda Triangle. A line drawn across the Java Sea from the center of Java to Borneo, on to the Celebes and back to Java forms a fat triangle that is thought to contain giant fish , monsters from the deep and misty fountains of magic and destruction. The tales are legion and passed from ship to ship like some extraterrestrial currency. We heard the same yarns many times: schooners that suddenly vanish on a calm sea, catch fire during rainstorms, or are attacked by fantastic beasts. According to the Indonesian sailors we met , magic can come from anywhere: sky, sea or land . Sometimes it arrives with a storm and alights on the masthead , sparkling like stars. Or it can rise from the depths with great brilliance and consume the ship. Stones, especially those near the sea, are often thought to possess magic and many sailors we met carry one to protect them in time of need . They rub the stone occasionally for luck and when they are ill, it is soaked in a glass of water which is later drunk as medicine. The most treacherous part of the Java Sea Triangle is said to be near the center, &quot;a sea of wandering rocks and islands.&quot; More than likely it is not rocks or islands that wander, but underwater sandbanks that shift endlessly with the current. No chart can plot them , and not even the most experienced captain can predict their location. A course that may be safe on one voyage can be a disaster on the next. SEA HISTORY, SUMMER 1985