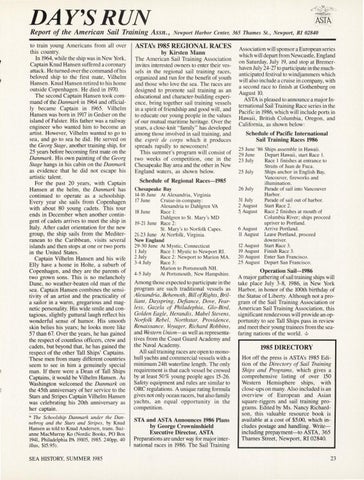 to train young Americans from all over this country. In 1964, while the ship was in New York, Captain Knud Hansen suffered a coronary attack . He turned over the command of his beloved ship to the first mate, Vilhelm Hansen. Knud Hansen retired to his home outside Copenhagen . He died in 1970. The second Captain Hansen took command of the Danmark in 1964 and officially became Captain in 1965. Vilhelm Hansen was born in 1917 in Gedser on the island of Falster. His father was a railway engineer who wanted him to become an artist. However, Vilhelm wanted to go to sea, and go to sea he did. He served on the Georg Stage, another training ship, for 25 years before becoming first mate on the Danmark. His own painting of the Georg Stage hangs in his cabin on the Danmark as evidence that he did not escape his artistic talent. For the past 20 years, with Captain Hansen at the helm , the Danmark has continued to operate as a schoolship. Every year she sails from Copenhagen with about 80 young cadets. This tour ends in December when another contingent of cadets arrives to meet the ship in Italy. After cadet orientation for the new group, the ship sails from the Mediterranean to the Caribbean, visits several islands and then stops at one or two ports in the United States. Captain Vilhelm Hansen and his wife Elly have a home in Holte, a suburb of Copenhagen, and they are the parents of two grown sons. This is no melancholy Dane, no weather-beaten old man of the sea . Captain Hansen combines the sensitivity of an artist and the practicality of a sailor in a warm, gregarious and magnetic personality. His wide smile and contagious, slightly guttural laugh reflect his wonderful sense of humor. His smooth skin belies his years; he looks more like 57 than 67. Over the years, he has gained the respect of countless officers, crew and cadets, but beyond that, he has gained the respect of the other Tall Ships&#39; Captains. These men from many different countries seem to see in him a genuinely special man . If there were a Dean of Tall Ships Captains, it would be Vilhelm Hansen . As Washington welcomed the Danmark on the 45th anniversary of her service to the Stars and Stripes Captain Vilhelm Hansen was celebrating his 20th anniversary as her captain.

ASTA&#39;s 1985 REGIONAL RACES by Kirsten Mann The American Sail Training Association invites interested owners to enter their vessels in the regional sail training races, organized and run for the benefit of youth and those who love the sea . The races are designed to promote sail training as an educational and character-building experience, bring together sail training vessels in a spirit of friendship and good will, and to educate our young people in the values of our mutual maritime heritage. Over the years, a close-knit &quot; family &quot; has developed among those involved in sail training, and the esprit de corps which it produces spreads rapidly to newcomers! This summer&#39;s program will consist of two weeks of competition, one in the Chesapeake Bay area and the other in New England waters , as shown below.

Alexandria, Behemoth, Bill ofRights, Brilliant, Dayspring, Defiance, Dove, Fearless, Gaze/a of Philadephia, Glo-Bird, Golden &amp;gle, Herandis, Mabel Stevens, Norfolk Rebel, Northstar, Providence, Renaissance, Voyager, Richard Robbins, and !#stem Union-as well as representatives from the Coast Guard Academy and the Naval Academy. All sail training races are open to monohull yachts and commercial vessels with a minimum 24ft waterline length . The only requirement is that each vessel be crewed by at least 50 % young people ages 15-26. Safety equipment and rules are similar to ORC regulations. A unique rating formula gives not only ocean racers, but also family yachts, an equal opportunity in the competition.

STA and ASTA Announces 1986 Plans by George Crowninshield Executive Director, ASTA Preparations are under way for major international races in 1986. The Sail Training

Association will sponsor a European series which will depart from Newcastle, England on Saturday, July 19, and stop at Bremerhaven July 24-27 to participate in the muchanticipated festival to windjammers which wi ll also include a cruise in company, with a second race to fin ish at Gothenburg on August JO. ASTA is pleased to announce a major International Sail Training Race series in the Pacific in 1986, which will include ports in Hawaii , British Columbia, Oregon , and California , as shown below :

Operation Sail-1986 A major gathering of sail training ships will take place July 3-8, 1986, in New York Harbor, in honor of the lOOth birthday of the Statue of Liberty. Although not a program of the Sail Training Association or American Sail Training Association , this significant rendezvous will provide an opportunity to see Tall Ships pass in review and meet their young trainees from the seafaring nations of the world . &#39;11

1985 DIRECTORY Hot off the press is ASTA&#39;s 1985 Edition of the Directory of Sail Training Ships and Programs, which gives a comprehensive listing of over 150 Western Hemisphere ships, with close-ups on many. Also included is an overview of European and Asian square-riggers and sail training programs. Edited by Ms . Nancy Richardson, this valuable resource book is available at a cost of $5.00, which includes postage and handling. Writeincluding prepayment-to ASTA, 365 Thames Street , Newport , RI 02840.