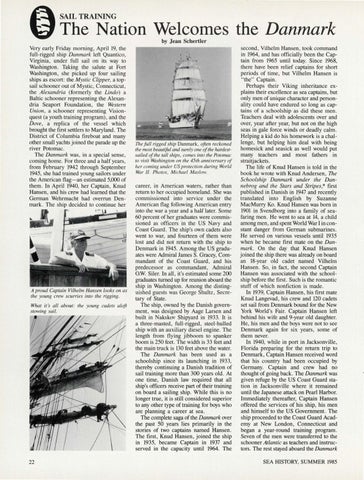 \;I The Nation Welcomes the Danmark by Jean Schertler Very early Friday morning, April 19, the full-rigged ship Danmark left Quantico, Virginia , under full sail on its way to Washington. Taking the salute at Fort Washington , she picked up four sailing ships as escort: the Mystic Clipper, a topsail schooner out of Mystic, Connecticut, the Alexandria (formerly the Lindo) a Baltic schooner representing the Alexandria Seaport Foundation , the ~ste rn Union, a schooner representing Visionquest (a youth training program) , and the Dove , a replica of the vessel which brought the first settlers to Maryland. The District of Columbia fireboat and many other small yachts joined the parade up the river Potomac. The Danmark was, in a special sense, corning home. For three and a half years , from February 1942 through September 1945, she had trained young sailors under the American flag- an estimated 5,000 of them. In April 1940, her Captain , Knud Hansen , and his crew had learned that the German Wehrmacht had overrun Denmark . The ship decided to continue her

A proud Captain Vi/h elm Hansen looks on as the young crew scurries into the rigging. What it &#39;s all about: the young cadets aloft stowing sail.

The full rigged ship Danmark, often reckoned the most beautiful and surely one of the hardestsailed of the tall ships, comes into the Potomac to visit UUshington on the 45th anniversary of her coming under US protection during World War II. Photos, Michael Maslow.

career, in American waters, rather than return to her occupied homeland . She was commissioned into service under the American flag following American entry into the war a year and a half later. Some 60 percent of her graduates were commissioned as officers in the US Navy and Coast Guard . The ship&#39;s own cadets also went to war, and fourteen of them were lost and did not return with the ship to Denmark in 1945. Among the US graduates were Admiral James S. Gracey, Commandant of the Coast Guard , and his predecessor as commandant, Admiral O.W. Siler. In all , it&#39;s estimated some 200 graduates turned up for reunion aboard the ship in Washington. Among the distinguished guests was George Shultz , Secretary of State. The ship, owned by the Danish government, was designed by Aage Larsen and built in Nakskov Shipyard in 1933. It is a three-masted , full-rigged , steel-hulled ship with an auxiliary diesel engine. The length from flying jibboom to spanker boom is 250 feet. The width is 33 feet and the main truck is 130 feet above the water. The Danmark has been used as a schoolship since its launching in 1933, thereby continuing a Danish tradition of sail training more than 300 years old. At one time, Danish law required that all ship&#39;s officers receive part of their training on board a sailing ship. While this is no longer true, it is still considered superior to any other type of training for boys who are planning a career at sea. The complete saga of the Danmark over the past 50 years lies primarily in the stories of two captains named Hansen . The first, Knud Hansen, joined the ship in 1935, became Captain in 1937 and served in the capacity until 1964. The

second , Vilhelm Hansen , took command in 1964, and has officially been the Captain from 1965 until today. Since 1968, there have been relief captains for short periods of time, but Vilhelm Hansen is &quot;the&quot; Captain. Perhaps their Viking inheritance explains their excellence as sea captains, but only men of unique character and personality could have endured so long as captains of a schoolship as did these men. Teachers deal with adolescents over and over, year after year, but not on the high seas in gale force winds or deadly calm. Helping a kid do his homework is a challenge, but helping him deal with being homesick and seasick as well would put many teachers and most fathers in straitjackets. The life of Knud Hansen is told in the book he wrote with Knud Andersen , The Schoo/ship Danmark under the Dannebrog and the Stars and Stripes,* first published in Danish in 1947 and recently translated into English by Suzanne MacMurry Ko. Knud Hansen was born in 1901 in Svendborg into a family of seafaring men . He went to sea at 14, a child among men, and spent World War I in constant danger from German submarines. He served on various vessels until 1935 when he became first mate on the Danmark. On the day that Knud Hansen joined the ship there was already on board an 18-year old cadet named Vilhelm Hansen . So, in fact , the second Captain Hansen was associated with the schoolship before the first. Such is the romantic stuff of which nonfiction is made. In 1939, Captain Hansen, his first mate Knud Langevad, his crew and 120 cadets set sail from Denmark bound for the New York World&#39;s Fair. Captain Hansen left behind his wife and 9-year old daughter. He, his men and the boys were not to see Denmark again for six years, some of them never. In 1940, while in port in Jacksonville, Florida preparing for the return trip to Denmark , Captain Hansen received word that his country had been occupied by Germany. Captain and crew had no thought of going back. The Danmark was given refuge by the US Coast Guard station in Jacksonville where it remained until the Japanese attack on Pearl Harbor. Immediately thereafter, Captain Hansen offered the services of his ship, his men and himself to the US Government. The ship proceeded to the Coast Guard Academy at New London , Connecticut and began a year-round training program. Seven of the men were transferred to the schooner Al/antic as teachers and instructors . The rest stayed aboard the Danmark SEA HISTORY, SUMMER 1985