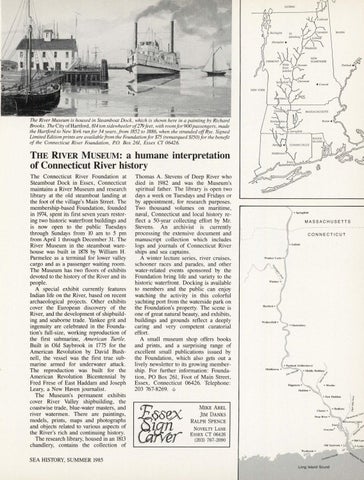 The River Museum is housed in Steamboat Dock , which is shown here in a painting by Richard Brooks. The City of Hartford , 814 tonsidewheelero/279 feet , with roomfor 900 passengers, made the Hartford to New York run for 34 years. from 1852 to 1886, when she stranded off Rye. Signed Limited Edition prints are available from the Foundation for $75 (remarqued $150) for the benefit of the Connecticut River Foundation, PO. Box 261, Essex CT 06426

THE RlvER MUSEUM: a humane interpretation

of Connecticut River history The Connecticut River Foundation at Steamboat Dock in Essex, Connecticut maintains a River Museum and research library at the old steamboat landing at the foot of the village&#39;s Main Street. The membership-based Foundation, founded in 1974, spent its first seven years restoring two historic waterfront buildings and is now open to the public Tuesdays through Sundays from 10 am to 5 pm from April 1 through December 31. The River Museum in the steamboat warehouse was built in 1878 by William H . Parmelee as a terminal for lower valley cargo and as a passenger waiting room . The Museum has two floors of exhibits devoted to the history of the River and its people. A special exhibit currently features Indian life on the River, based on recent archaeological projects. Other exhibits cover the European discovery of the River, and the development of shipbuilding and seaborne trade. Yankee grit and ingenuity are celebrated in the Foundation&#39;s full-size, working reproduction of the first submarine, American Turtle. Built in Old Saybrook in 1775 for the American Revolution by David Bushnell, the vessel was the first true submarine armed for underwater attack. The reproduction was built for the American Revolution Bicentennial by Fred Frese of East Haddam and Joseph Leary, a New Haven journalist. The Museum&#39;s permanent exhibits cover River Valley shipbuilding, the coastwise trade, blue-water masters, and river watermen. There are paintings, models, prints, maps and photographs and objects related to various aspects of the River&#39;s rich and continuing history. The research library, housed in an 1813 chandlery, contains the collection of

Thomas A. Stevens of Deep River who died in 1982 and was the Museum&#39;s spiritual father. The library is open two days a week on Tuesdays and Fridays or by appointment, for research purposes. Two thousand volumes on maritime, naval, Connecticut and local history reflect a 50-year collecting effort by Mr. Stevens. An archivist is currently processing the extensive document and manuscript collection which includes logs and journals of Connecticut River ships and sea captains. A winter lecture series, river cruises, schooner races and parades, and other water-related events sponsored by the Foundation bring life and variety to the historic waterfront. Docking is available to members and the public can enjoy watching the activity in this colorful yachting port from the waterside park on the Foundation&#39;s property. The scene is one of great natural beauty, and exhibits , buildings and grounds reflect a deeply caring and very competent curatorial effort. A small museum shop offers books and prints, and a surprising range of excellent small publications issued by the Foundation, which also gets out a lively newsletter to its growing membership. For further information: Foundation , PO Box 261, Foot of Main Street, Essex , Connecticut 06426. Telephone: 203 767-8269. J,