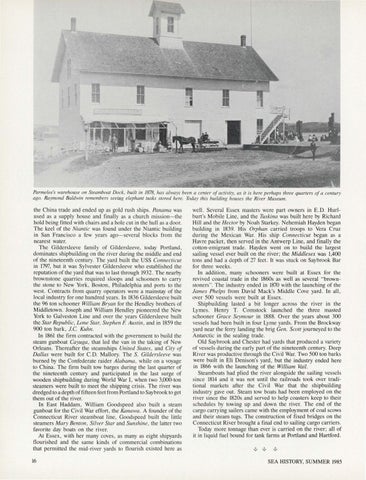 Parmelee&#39;s warehouse on Steamboat Dock, built in 18&#39;78, has always been a center of activity, as it is here perhaps three quarters of a century ago. Raymond Baldwin remembers seeing elephant tusks stored here. Today this building houses the River Museum.

the China trade and ended up as gold rush ships. Panama was used as a supply house and finally as a church mission-the hold being fitted with chairs and a hole cut in the hull as a door. The keel of the Niantic was found under the Niantic building in San Francisco a few years ago-several blocks from the nearest water. The Gildersleeve family of Gildersleeve, today Portland , dominates shipbuilding on the river during the middle and end of the nineteenth century. The yard built the USS Connecticut in 17fJ&quot;7, but it was Sylvester Gildersleeve who established the reputation of the yard that was to last through 1932. The nearby brownstone quarries required sloops and schooners to carry the stone to New York , Boston , Philadelphia and ports to the west. Contracts from quarry operators were a mainstay of the local industry for one hundred years. In 1836 Gildersleeve built the 96 ton schooner William Bryan for the Hendley brothers of Middletown. Joseph and William Hendley pioneered the New York to Galveston Line and over the years Gildersleeve built the Star Republic, Lone Star, Stephen F Austin, and in 1859 the 900 ton bark, J.C. Kuhn. In 1861 the firm contracted with the government to build the steam gunboat Cayuga, that led the van in the taking of New Orleans. Thereafter the steamships United States, and City of Dallas were built for C.D. Mallory. The S. Gildersleeve was burned by the Confederate raider Alabama, while on a voyage to China. The firm built tow barges during the last quarter of the nineteenth century and participated in the last surge of wooden shipbuilding during World War I, when two 3,000-ton steamers were built to meet the shipping crisis. The river was dredged to a depth of fifteen feet from Portland to Saybrook to get them out of the river. In East Haddam , William Goodspeed also built a steam gunboat for the Civil War effort, the Kanawa. A founder of the Connecticut River steamboat line, Goodspeed built the little steamers Mary Benton, Silver Star and Sunshine, the latter two favorite day boats on the river. At Essex , with her many coves, as many as eight shipyards flourished and the same kinds of commercial combinations that permitted the mid-river yards to flourish existed here as 16

well. Several Essex masters were part owners in E.D. Hurlburt&#39;s Mobile Line, and the Tuskina was built here by Richard Hill and the Hector by Noah Starkey. Nehemiah Hayden began building in 1839. His Orphan carried troops to Vera Cruz during the Mexican War. His ship Connecticut began as a Havre packet, then served in the Antwerp Line, and finally the cotton-emigrant trade. Hayden went on to build the largest sailing vessel ever built on the river; the Middlesex was 1,400 tons and had a depth of 27 feet. It was stuck on Saybrook Bar for three weeks. In addition, many schooners were built at Essex for the revived coastal trade in the 1860s as well as several &quot;brownstoners&#39;&#39;. The industry ended in 1870 with the launching of the James Phelps from David Mack&#39;s Middle Cove yard. In all, over 500 vessels were built at Essex. Shipbuilding lasted a bit longer across the river in the Lymes. Henry T. Comstock launched the three masted schooner Grace Seymour in 1888. Over the years about 300 vessels had been built in four Lyme yards. From the Brockway yard near the ferry landing the brig Gen. Scott journeyed to the Antarctic in the sealing trade. Old Saybrook and Chester had yards that produced a variety of vessels during the early part of the nineteenth century. Deep River was productive through the Civil War. Two 500 ton barks were built in Eli Denison&#39;s yard, but the industry ended here in 1866 with the launching of the William 11iil. Steamboats had plied the river alongside the sailing vessels since 1814 and it was not until the railroads took over traditional markets after the Civil War that the shipbuilding industry gave out. Steam tow boats had been employed on the river since the 1820s and served to help coasters keep to their schedules by towing up and down the river. The end of the cargo carrying sailers came with the employment of coal scows and their steam tugs . The construction of fixed bridges on the Connecticut River brought a final end to sailing cargo carriers. Today more tonnage than ever is carried on the river; all of it in liquid fuel bound for tank farms at Portland and Hartford.