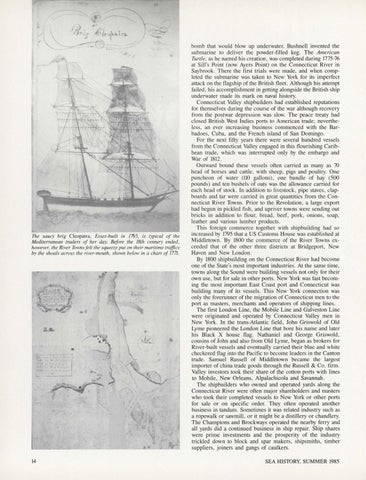 The saucy brig Cleopatra , Essex-built in 1&#39;795, is typical of the Mediterranean traders of her day. Before the 18th century ended, however, the River Towns felt the squeeze put on their maritime traffics by the shoals across the river-mouth , shown below in a chart of 1771.

bomb that would blow up underwater, Bushnell invented the submarine to deliver the powder-filled keg. The American Turtle, as he named his creation, was completed during 1775-76 at Sill&#39;s Point (now Ayers Point) on the Connecticut River in Saybrook. There the first trials were made, and when completed the submarine was taken to New York for its imperfect attack on the flagship of the British fleet . Although his attempt failed , his accomplishment in getting alongside the British ship underwater made its mark on naval history. Connecticut Valley shipbuilders had established reputations for themselves during the course of the war although recovery from the postwar depression was slow. The peace treaty had closed British West Indies ports to American trade; nevertheless , an ever increasing business commenced with the Barbadoes, Cuba , and the French island of San Domingo. For the next fifty years there were several hundred vessels from the Connecticut Valley engaged in this flourishing Caribbean trade, which was interrupted only by the embargo and War of 1812. Outward bound these vessels often carried as many as 70 head of horses and cattle, with sheep, pigs and poultry. One puncheon of water (llO gallons) , one bundle of hay (500 pounds) and ten bushels of oats was the allowance carried for each head of stock . In addition to livestock , pipe staves, clapboards and tar were carried in great quantities from the Connecticut River Towns. Prior to the Revolution , a large export had begun in pickled fish , and upriver towns were sending out bricks in addition to flour, bread, beef, pork, onions, soap, leather and various lumber products. This foreign commerce together with shipbuilding had so increased by 1795 that a US Customs House was established at Middletown. By 1800 the commerce of the River Towns exceeded that of the other three districts at Bridgeport, New Haven and New London . By 1800 shipbuilding on the Connecticut River had become one of the State&#39;s most important industries. At the same time, towns along the Sound were building vessels not only for their own use, but for sale in other ports. New York was fast becoming the most important East Coast port and Connecticut was building many of its vessels. This New York connection was only the forerunner of the migration of Connecticut men to the port as masters, merchants and operators of shipping lines. The first London Line, the Mobile Line and Galveston Line were originated and operated by Connecticut Valley men in New York. In the trans-Atlantic field , John Griswold of Old Lyme pioneered the London Line that bore his name and later his Black X house flag. Nathaniel and George Griswold , cousins of John and also from Old Lyme, began as brokers for River-built vessels and eventually carried their blue and white checkered flag into the Pacific to become leaders in the Canton trade. Samuel Russell of Middletown became the largest importer of china trade goods through the Russell &amp; Co. firm. Valley investors took their share of the cotton ports with lines to Mobile, New Orleans, Alpalachicola and Savannah. The shipbuilders who owned and operated yards along the Connecticut River were often major shareholders and masters who took their completed vessels to New York or other ports for sale or on specific order. They often operated another business in tandam. Sometimes it was related industry such as a ropewalk or sawmill, or it might be a distillery or chandlery. The Champions and Brockways operated the nearby ferry and all yards did a continued business in ship repair. Ship shares were prime investments and the prosperity of the industry trickled down to block and spar makers, shipsmiths, timber suppliers, joiners and gangs of caulkers. SEA HISlORY, SUMMER 1985