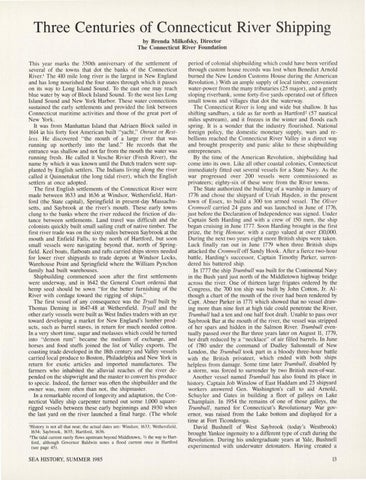 Three Centuries of Connecticut River Shipping by Brenda Milkofsky, Director The Connecticut River Foundation This year marks the 350th anniversary of the settlement of several of the towns that dot the banks of the Connecticut River. 1 The 410 mile long river is the largest in New England and has long nourished the four states through which it passes on its way to Long Island Sound. To the east one may reach blue water by way of Block Island Sound. To the west lies Long Island Sound and New York Harbor. These water connections sustained the early settlements and provided the link between Connecticut maritime activities and those of the great port of New York. It was from Manhattan Island that Adriaen Block sailed in 1614 i.n his forty foot American built &quot;yacht,&quot; Onrust or Restless. He discovered &quot; the mouth of a large river that was running up northerly into the land.&quot; He records that the entrance was shallow and not far from the mouth the water was running fresh. He called it Vesche Rivier (Fresh River) , the name by which it was known until the Dutch traders were supplanted by English settlers. The Indians living along the river called it Quinnetukut (the long tidal river) , which the English settlers at once adopted . The first English settlements of the Connecticut River were made between 1633 and 1636 at Windsor, Wethersfield , Hartford (the State capital), Springfield in present-day Massachusetts, and Saybrook at the river&#39;s mouth. These early towns clung to the banks where the river reduced the friction of distance between settlements. Land travel was difficult and the colonists quickly built small sailing craft of native timber. The first river trade was on the sixty miles between Saybrook at the mouth and Enfield Falls, to the north of Hartford , but soon small vessels were navigating beyond that, north of Springfield. Keel boats , flatboats and rafts carried ships stores needed for lower river shipyards to trade depots at Windsor Locks, Warehouse Point and Springfield where the William Pynchon family had built warehouses. Shipbuilding commenced soon after the first settlements were underway, and in 1642 the General Court ordereci that hemp seed should be sown &quot;for the better furnishing of the River with cordage toward the rigging of ships.&quot; The first vessel of any consequence was the Tryall built by Thomas Deming in 1647-48 at Wethersfield. Tryall and the other early vessels were built as West Indies traders with an eye toward developing a market for New England&#39;s lumber products, such as barrel staves, in return for much needed cotton. In a very short time, sugar and molasses which could be turned into &quot;demon rum&quot; became the medium of exchange, and horses and food stuffs joined the list of Valley exports. The coasting trade developed in the 18th century and Valley vessels carried local produce to Boston, Philadelphia and New York in return for exotic articles and imported manufactures. The farmers who inhabited the alluvial reaches of the river depended on the shipwright and the master to convert his produce to specie. Indeed, the farmer was often the shipbuilder and the owner was, more often than not, the shipmaster. In a remarkable record of longevity and adaptation, the Connecticut Valley ship carpenter turned out some 1,000 squarerigged vessels between these early beginnings and 1930 when the last yard on the river launched a final barge. (The whole History is not all that neat ; the actual dates are: Windsor, 1633 ; Wethersfield , 1634; Saybrook, 1635; Hartford, 1636. 2The tidal current rarely flows upstream beyond Middletown , 2h the way to Hartford , although Governor Baldwin notes a flood current once in Hartford (see page 45) .

period of colonial shipbuilding which could have been verified through custom house records was lost when Benedict Arnold burned the New London Customs House during the American Revolution.) With an ample supply of local timber, convenient water-power from the many tributaries (25 major) , and a gently sloping riverbank , some forty-five yards operated out of fifteen small towns and villages that dot the waterway. The Connecticut River is long and wide but shallow. It has shifting sandbars, a tide as far north as Hartford 2 (57 nautical miles upstream), and it freezes in the winter and floods each spring. It is a wonder that the industry flourished. National foreign policy, the domestic monetary supply, wars and rebellions reached the Connecticut River Valley in a direct way and brought prosperity and panic alike to these shipbuilding entrepreneurs. By the time of the American Revolution , shipbuilding had come into its own. Like all other coastal colonies, Connecticut immediately fitted out several vessels for a State Navy. As the war progressed over 200 vessels were commissioned as privateers; eighty-six of these were from the River towns. The State authorized the building of a warship in January of 1776 and chose the shipyard of Uriah Hayden , in the present town of Essex , to build a 300 ton armed vessel. The Oliver Cromwell carried 24 guns and was launched in June of 1776, just before the Declaration oflndependence was signed. Under Captain Seth Harding and with a crew of 150 men, the ship began cruising in June 1777. Soon Harding brought in the first prize, the brig Honour, with a cargo valued at over ÂŁ10,000. During the next two years eight more British ships were taken . Luck finally ran out in June 1779 when three British ships attacked the Cromwell off Sandy Hook. After a fierce two-hour battle, Harding&#39;s successor, Captain Timothy Parker, surrendered his battered ship. In 1777 the ship Trumbull was built for the Continental Navy in the Bush yard just north of the Middletown highway bridge across the river. One of thirteen large frigates ordered by the Congress, the 700 ton ship was built by John Cotton, Jr. Although a chart of the mouth of the river had been rendered by Capt. Abner Parker in 1771 which showed that no vessel drawing more than nine feet at high tide could penetrate the River, Trumbull had a ten and one half foot draft. Unable to pass over Saybrook Bar at the mouth of the river, the vessel was stripped of her spars and hidden in the Salmon River. Trumbull eventually passed over the Bar three years later on August 11, 1779, her draft reduced by a &quot;necklace&quot; of air filled barrels. In June of 1780 under the command of Dudley Saltonstall of New London ,. the Trumbull took part in a bloody three-hour battle with the British privateer, which ended with both ships helpless from damage. Some time later Trumbull, disabled by a storm , was forced to surrender by two British men-of-war. Another vessel named Trumbull has also found its place in history. Captain Job Winslow of East Haddam and 25 shipyard workers answered Gen. Washington&#39;s call to aid Arnold, Schuyler and Gates in building a fleet of galleys on Lake Champlain . In 1954 the remains of one of those galleys, the Trumbull, named for Connecticut&#39;s Revolutionary War governor, was raised from the Lake bottom and displayed for a time at Fort Ticonderoga. David Bushnell of West Saybrook (today&#39;s Westbrook) brought Yankee ingenuity to a different type of craft during the Revolution. During his undergraduate years at Yale, Bushnell experimented with underwater detonaters. Having created a 13