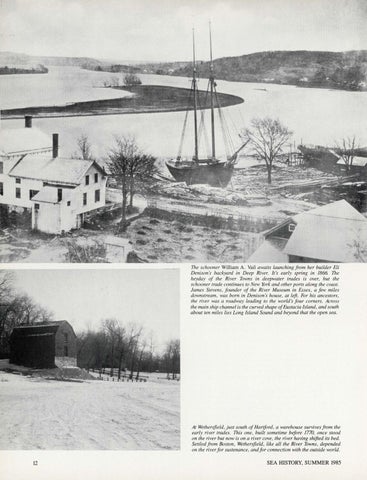 The schooner William A. Vail awaits launching from her builder Eli Denison&#39;s backyard in Deep River. It&#39;s early spring in 1866. The heyday of the River Towns in deepwater trades is over, but the schooner trade continues to New York and other ports along the coast. James Stevens, founder of the River Museum in Essex, a few miles downstream , was born in Denison&#39;s house, at left. For his ancestors, the river was a roadway leading to the world&#39;s four corners. Across the main ship channel is the curved shape of Eustacia Island, and south about ten miles lies Long Island Sound and beyond that the open sea.

Wethersfield, just south of Hartford, a warehouse survives from the early river trades. This one, built sometime before 1770, once stood on the river but now is on a river cove, the river having shifted its bed. Settled from Boston, Wethersfield, like all the River Towns, depended on the river for sustenance, and for connection with the outside world.