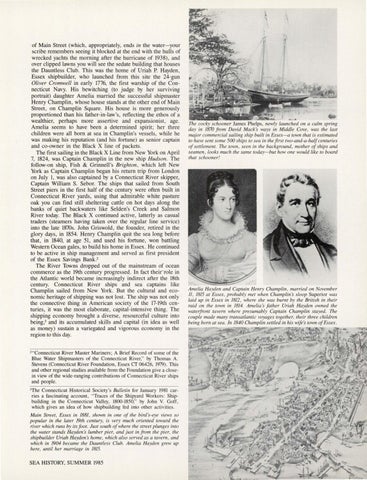 of Main Street (which , appropriately, ends in the water-your scribe remembers seeing it blocked at the end with the hulls of wrecked yachts the morning after the hurricane of 1938), and over clipped lawns you wiJI see the sedate building that houses the Dauntless Club. This was the home of Uriah P. Hayden , Essex shipbuilder, who launched fi;om this site the 24-gun Oliver Cromwell in early 1776, the first warship of the Connecticut Navy. His bewitching (to judge by her surviving portrait) daughter Amelia married the successful shipmaster Henry Champlin , whose house stands at the other end of Main Street, on Champlin Square. His house is more generously proportioned than his father-in-law&#39;s, reflecting the ethos of a wealthier, perhaps more assertive and expansionist, age. Amelia seems to have been a determined spirit; her three children were all born at sea in Champlin&#39;s vessels, while he was making his reputation (and his fortune) as senior captain and co-owner in the Black X line of packets. The first sailing in the Black X Line from New York on April 7, 1824, was Captain Champlin in the new ship Hudson. The follow-on ship, Fish &amp; Grinnell&#39;s Brighton , which left New York as Captain Champlin began his return trip from London on July 1, was also captained by a Connecticut River skipper, Captain William S. Sebor. The ships that sailed from South Street piers in the first half of the century were often built in Connecticut River yards, using that admirable white pasture oak you can find still sheltering cattle on hot days along the banks of quiet backwaters like Selden&#39;s Creek and Salmon River today. The Black X continued active, latterly as casual traders (steamers having taken over the regular line service) into the late 1870s. John Griswold , the founder, retired in the glory days, in 1854. Henry Champlin quit the sea long before that, in 1840, at age 51 , and used his fortune, won battling Western Ocean gales, to build his home in Essex. He continued to be active in ship management and served as first president of the Essex Savings Bank.2 The River Towns dropped out of the mainstream of ocean commerce as the 19th century progressed. In fact their&quot;role in the Atlantic world became increasingly indirect after the 18th century. Connecticut River ships and sea captains like Champlin sailed from New York . But the cultural and economic heritage of shipping was not lost. The ship was not only the connective thing in American society of the 17-19th centuries, it was the most elaborate, capital-intensive thing. The shipping economy brought a diverse, resourceful culture into being,3 and its accumulated skills and capital (in idea as well as money) sustain a variegated and vigorous economy in the region to this day. 2 &quot; Connecticut

River Master Mariners; A Brief Record of some of the Blue Water Shipmasters of the Connecticut River,&quot; by Thomas A. Stevens (Connecticut River Foundation , Essex CT 06426, 1979). This and other regional studies available from the Foundation give a closein view of the wide-ranging contributions of Connecticut Ri ver ships and people.

Connecticut Historical Society&#39;s Bulletin for January 1981 ca rries a fascinating account, &quot; Traces of the Shipyard Workers: Shipbuilding in the Connecticut Valley, 1800-1850,&quot; by John V. Goff, which gives an idea of how shipbuilding fed into other acti vities.

Main Street, Essex in 1881, shown in one of the bird&#39;s-eye views so popular in the later 19th century, is very much oriented toward the river which runs by its foot. Just south of where the street plunges into the water stands Hayden&#39;s lumber pier, and just in from the pier, the shipbuilder Uriah Hayden&#39;s home, which also served as a ta vern, and which in 1904 became the Dauntless Club. Amelia Hayden grew up here, until her marriage in 1815.

The cocky schooner James Phelps, newly launched on a calm spring day in llflO from David Mack&#39;s ways in Middle Cove, was the last major commercial sailing ship built in Essex-a town that is estimated to have sent some 500 ships to sea in the first two-and-a-half centuries of settlement. The town, seen in the background, mother of ships and seamen, looks much the same today-but how one would like to board that schooner!