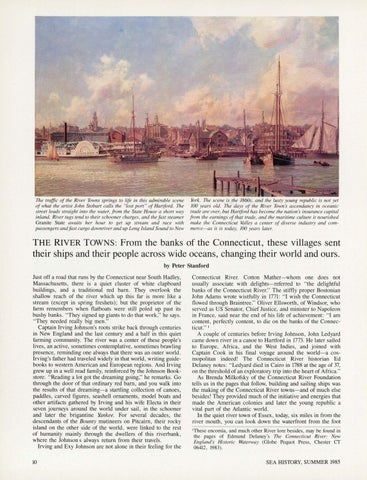 The traffic of the River Towns springs to life in this admirable scene of what the artist John Stobart calls the &quot;lost port&quot; of Hartford. The street leads straight into the water, from the State House a short way inland. River tugs tend to their schooner charges, and the fast steamer Granite State awaits her hour to get up stream and race with passengers and fast cargo downriver and up long Island Sound to New

York. The scene is the 1860s, and the lusty young republic is not yet JOO years old. The days of the River Town&#39;s ascendancy in oceanic

trade are over, but Hartford has become the nation &#39;s insurance capital from the earnings of that trade, and the maritime culture it nourished make the Connecticut Valley a center of diverse industry and commerce-as it is today, JOO years later.

THE RIVER TOWNS: From the banks of the Connecticut, these villages sent

their ships and their people across wide oceans, changing their world and ours. by Peter Stanford Just off a road that runs by the Connecticut near South Hadley, Massachusetts, there is a quiet cluster of white clapboard buildings, and a traditional red barn . They overlook the shallow reach of the river which up this far is more like a stream (except in spring freshets) ; but the proprietor of the farm remembers when flatboats were still poled up past its bushy banks . &quot;They signed up giants to do that work ,&#39;&#39; he says. &quot;They needed really big men.&quot; Captain Irving Johnson&#39;s roots strike back through centuries in New England and the last century and a half in this quiet farming community. The river was a center of these people&#39;s lives, an active, sometimes contemplative, sometimes brawling presence, reminding one always that there was an outer world. Irving&#39;s father had traveled widely in that world , writing guidebooks to western American and European regions. And Irving grew up in a well read family, reinforced by the Johnson Bookstore. &quot; Reading a lot got the dreaming going,&#39;&#39; he remarks. Go through the door of that ordinary red barn , and you walk into the results of that dreaming-a startling collection of canoes, paddles, carved figures, seashell ornaments, model boats and other artifacts gathered by Irving and his wife Electa in their seven journeys around the world under sail, in the schooner and later the brigantine Yankee. For several decades, the descendants of the Bounty mutineers on Pitcairn , their rocky island on the other side of the world , were linked to the rest of humanity mainly through the dwellers of this riverbank , where the Johnson s always return from their travels. Irving and Exy Johnson are not alone in their feeling for the 10

Connecticut River. Cotton Mather-whom one does not usuall y associate with delights-referred to &quot; the delightful banks of the Connecticut River.&quot; The stiffly proper Bostonian John Adams wrote wistfully in 1771 : &quot; I wish the Connecticut flowed through Braintree.&quot; Oliver Ellsworth, of Windsor, who served as US Senator, Chief Justice, and minister to Napoleon in France, said near the end of his life of achievement: &quot; I am content, perfectly content, to die on the banks of the Connecticut.&quot; 1 A couple of centuries before Irving Johnson , John Ledyard came down river in a canoe to Hartford in 1773. He later sailed to Europe, Africa, and the West Indies , and joined with Captain Cook in his final voyage around the world-a cosmopolitan indeed! The Connecticut River historian Ed Delaney notes : &quot;Ledyard died in Cairo in 1788 at the age of 37, on the threshold of an exploratory trip into the heart of Africa .&quot; As Brenda Milkofsky of the Connecticut River Foundation tells us in the pages that follow, building and sailing ships was the making of the Connecticut River towns-and of much else besides! They provided much of the initiative and energies that made the American colonies and later the young republic a vital part of the Atlantic world . In the quiet river town of Essex, today, six miles in from the river mouth, you can look down the waterfront from the foot &#39;These encomia, and much other River lore besides, may be found in the pages of Edmund Delaney&#39;s The Connecticut River: New England&#39;s Historic Waterway (Globe Pequot Press, Chester CT 06412 , 1983) .