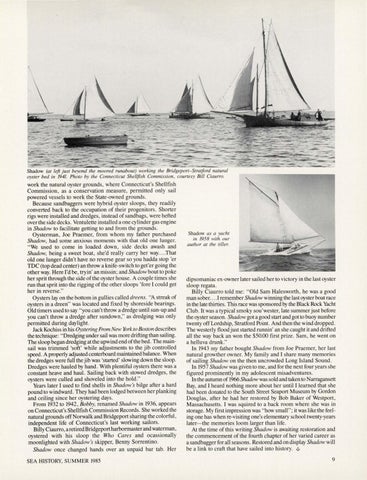 work the natural oyster grounds, where Connecticut&#39;s Shellfish Commission , as a conservation measure, permitted only sail powered vessels to work the State-owned grounds . Because sandbaggers were hybrid oyster sloops, they readily converted back to the occupation of their progenitors. Shorter rigs were installed and dredges, instead of sandbags , were hefted over the side decks. Ventulette installed a one cylinder gas engine in Shadow to facilitate getting to and from the grounds. Oysterman, Joe Praemer, from whom my father purchased Shadow, had some anxious moments with that old one lunger. &quot;We used to come in loaded down, side decks awash and Shadow, being a sweet boat, she&#39;d really carry her way....That old one lunger didn&#39;t have no reverse gear so you hadda stop &#39;er TDC (top dead center) an throw a knife-switch to get&#39;er going the other way. Here I&#39;d be, tryin&#39; an missin ; and Shadow bout to poke her sprit through the side of the oyster house. A couple times she run that sprit into the rigging of the other sloops &#39;fore I could get her in reverse.&quot; Oysters lay on the bottom in gullies called dreens. &quot;A streak of oysters in a dreen&quot; was located and fixed by shoreside bearings. Old timers used to say &quot; you can&#39;t throw a dredge until sun-up and you can&#39;t throw a dredge after sundown ,&quot; as dredging was only permitted during daylight. Jack Kochiss in his Oystering From New &quot;lbrk to Boston describes the technique: &quot;Dredging under sail was more drifting than sailing. The sloop began dredging at the upwind end of the bed . The mainsail was trimmed &#39;soft&#39; while adjustments to the jib controlled speed. A properly adjusted centerboard maintained balance. When the dredges were full the jib was &#39;started&#39; slowing down the sloop. Dredges were hauled by hand . With plentiful oysters there was a constant heave and haul. Sailing back with stowed dredges, the oysters were culled and shoveled into the hold .&quot; Years later I used to find shells in Shadow &#39;s bilge after a hard pound to windward. They had been lodged between her planking and ceiling since her oystering days. From 1932 to 1942 , Bobby, renamed Shadow in 1936, appears on Connecticut&#39;s Shellfish Commission Records. She worked the natural grounds off Norwalk and Bridgeport sharing the colorful , independent life of Connecticut&#39;s last working sailors . Billy Ciaurro, a retired Bridgeport harbormaster and waterman, oystered with his sloop the Who Cares and ocassionally moonlighted with Shadow&#39;s skipper, Benny Sorrentino. Shadow once changed hands over an unpaid bar tab. Her SEA HISIDRY, SUMMER 1985

Shadow as a yacht

dipsomaniac ex-owner later sailed her to victory in the last oyster sloop regata . Billy Ciaurro told me: &quot;Old Sam Halesworth, he was a good man sober... .I remember Shadow winning the last oyster boat race in the late thirties. This race was sponsored by the Black Rock Yacht Club. It was a typical smoky sou&#39;wester, late summer just before the oyster season. Shadow got a good start and got to buoy number twenty off Lordship, Stratford Point. And then the wind dropped. The westerly flood just started runnin&#39; an she caught it and drifted all the way back an won the $50.00 first prize. Sam , he went on a helluva drunk.&quot; In 1943 my father bought Shadow from Joe Praemer, her last natural growther owner. My family and I share many memories of sailing Shadow on the then uncrowded Long Island Sound. In 1957 Shadow was given to me, and for the next four years she figured prominently in my adolescent misadventures . In the autumn of 1966 Shadow was sold and taken to Narragansett Bay, and I heard nothing more about her until I learned that she had been donated to the South Street Seaport Museum by Gordon Douglas, after he had her restored by Bob Baker of Westport , Massachusetts. I was squired to a back room where she was in storage. My first impression was &quot; how small &quot;; it was like the feeling one has when re-visiting one&#39;s elementary school twenty-years later-the memories loom larger than life. At the time of this writing Shadow is awaiting restoration and the commencement of the fourth chapter of her varied career as a sand bagger for all seasons. Restored and on display Shadow will be a link to craft that have sailed into history. .ti 9