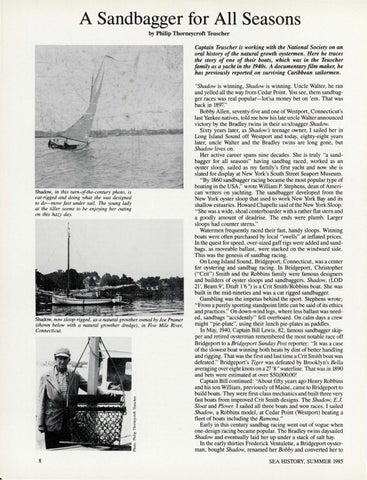 A Sandbagger for All Seasons by Philip Thorneycroft Teuscher

Shadow, in this tum-ofthe-century photo, is cat-rigged and doing what she was designed to do-move fast under sail. The young lady at the tiller seems to be enjoying her outing on this hazy day. 1

Captain Teuscher is working with the National Soi:iety on an oral history of the natural growth oystermen. Here he traces the story of one of their boats, which was in the Teuscher family as a yacht in the 1940s. A documentary film maker, he has previously reported, on surviving Caribbean sailormen. &quot;Shadow is winning, Shadow is winning. Uncle Walter, he ran and yelled all the way from Cedar Point. You see, them sandbagger races was real popular-lot&#39;sa money bet on &#39;em. That was back in 1897.&quot; Bobby Allen, seventy-five and one of Westport, Connecticut&#39;s last Yankee natives, told me how his late uncle Walter announced victory by the Bradley twins in their sandoagger Shadow. Sixty years later, as Shadow&#39;s teenage owner, I sailed her in Long Island Sound off Westport and today, eighty-eight years later, uncle Walter and the Bradley twins are long gone, but Shadow lives on . Her active career spans nine decades. She is truly &quot;a sandbagger for all seasons&quot; having sandbag raced, worked as an oyster sloop, sailed as my family &#39;s first yacht and now she is slated for display at New York&#39;s South Street Seaport Museum. &quot;By 1860 sandbagger racing became the most popular type of boating in the USA ,&quot; wrote William P. Stephens, dean of American writers on yachting. The sandbagger developed from the New York oyster sloop that used to work New York Bay and its shallow estuaries. Howard Chapelle said of the New York Sloop: &quot; She was a wide, shoal centerboarder with a rather flat stem and a goodly amount of deadrise. The ends were plumb. Larger sloops had counter stems.&quot; Watermen frequently raced their fast , handy sloops. Winning boats were often purchased by local &quot; swells&quot; at inflated prices. In the quest for speed , over-sized gaff rigs were added and sandbags, as moveable ballast, were stacked on the windward side. This was the genesis of sandbag racing. On Long Island Sound , Bridgeport, Connecticut, was a center for oystering and sandbag racing. In Bridgeport, Christopher (&quot; Crit&quot;) Smith and the Robbins family were famous designers and builders of oyster sloops and sandbaggers. Shadow, (LOD 21 &#39;, Beam 9 &#39;, Draft 1&#39;6 11) is a Crit Smith/Robbins boat. She was built in the mid-nineties and was a cat rigged sandbagger. Gambling was the impetus behind the sport. Stephens wrote; &quot;From a purely sporting standpoint little can be said of its ethics and practices.&quot; On down-wind legs, where less ballast was needed, sandbags &quot;accidently&quot; fell overboard. On calm days a crew might &quot;pie-plate&#39;&#39;, using their lunch pie-plates as paddles. In May, 1940, Captain Bill Lewis, 82 , famous sandbagger skipper and retired oysterman remembered the most notable race off Bridgeport to a Bridgeport Sunday Post reporter: &quot; It was a case of the slowest boat winning both heats by dint of better handling and rigging. That was the first and last time a Crit Smith boat was defeated .&quot; Bridgeport&#39;s Tiger was defeated by Brooklyn&#39;s Bella averaging over eight knots on a Tl &#39;8 &quot; waterline. That was in 1890 and bets were estimated at over $50,000.00! Captain Bill continued : &#39;&#39;About fifty years ago Henry Robbins and his son William, previously of Maine, came to Bridgeport to build boats. They were first-class mechanics and built three very fast boats from improved Crit Smith designs . The Shadow, E.J. Sloat and Plover. I sailed all three boats and won races. I sailed Shadow, a Robbins model , at Cedar Point (Westport) beating a fleet of boats including the Ramona.&quot; Early in this century sandbag racing went out of vogue when one-design racing became popular. The Bradley twins daysailed Shadow and eventually laid her up under a stack of salt hay. In the early thirties Frederick Ventulette, a Bridgeport oysterman, bought Shadow, renamed her Bobby and converted her to