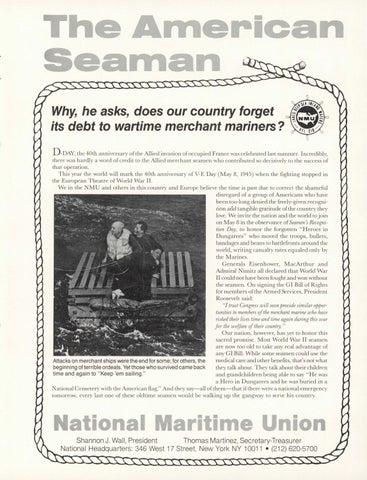 The A111erican Sea111an Why, he asks, does our country forget its debt to wartime merchant mariners? D- DAY, the 40th annive rsary of the Allied invasion of occupied France was celebrated last summer. Incredibl y, there was hardl y a word of credit to the Allied merchant seamen who contributed so decisively to the success of that operation. This year the world will mark the 40th anniversary of V-E Day (May 8, 1945) when the fi ghting stopped in the European Theatre of World War II. We in the NMU and others in this coun try and E urope believe the tim e is past due to correct the shameful disregard of a group of Americans who have been too-lon g denied the freely-given recognition and tangible gratitude of the country they love. We invite the nation and the world to join on M ay 8 in the observance of Seamen&#39;s Recognition Day, to honor the forgotten &quot; Heroes in Dungarees&quot; who moved the troops, bullets, bandages and beans to battlefront s around the world, writing casualty rates equaled only by the Marines. Generals Eisenhower, M acArthur a nd Admiral imitz all declared that World Wa r II could not have been fo ught and won without the seamen. On sign in g the GI BiJI of Rights for m embers of the Armed ~rv i ces , President Roosevelt said: &quot;/trust Congress will soon provide similar opportunities to members of the merchant marine who have risked their lives time and time again during this war for the welfare of their country.&quot; Our nation, however, has yet to honor thi s sacred promise. M ost World War II seamen are now too old to take any real advantage of any GI Bill. While some seamen could use the medical care and other benefits, that&#39;s not what Attacks on merchant ships were the end for some ; for others, the beginning of terrible ordeals. Yet those who survived came back they talk about. They talk a bout their children time and again to &quot;Keep &#39;em sailing.&quot; and grandchildren being a ble to say &quot; H e was a H ero in Dun garees and he was buried in a National Cemetery with the American fl ag.&quot; And they say- all of them -th at ifthere were a national em ergency tomorrow, every las t one of these oldtime seamen would be walking up the gangway to serve his country.