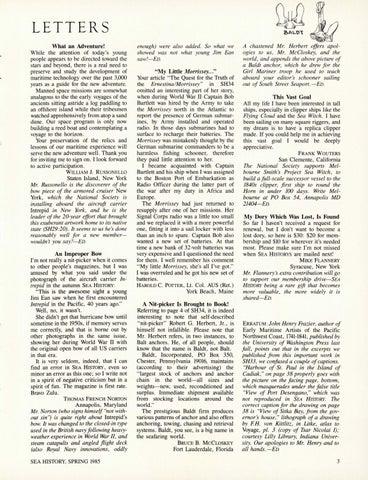 LETTERS What an Adventure! While the attention of today&#39;s young people appears to be directed toward the stars and beyond , there is a real need to preserve and study the development of maritime technology over the past 3,000 years as a guide for the new adventure. Manned space missions are somewhat analagous to the the early voyages of the ancients sitting astride a log paddling to an offshore island while their tribesmen watched apprehensively from atop a sand dune. Our space program is only now building a reed boat and contemplating a voyage to the horizon. Your preservation of the relics and lessons of our maritime experience will serve the new adventure well. Thank you for inviting me to sign on. I look forward to active participation. WILLIAM J. RUSSONELLO Staten Island , New York Mr. Russonello is the discoverer of the bow piece of the armored cruiser New York, which the National Society is installing aboard the aircraft carrier Intrepid in New York, and he is the leader of the 20-year effort that brought this exuberant artwork home to its native state (SH29:20). It seems to us he&#39;s done reasonably well for a new memberwouldn&#39;t you say?-ED.

An Improper Bow I&#39;m not really a nit-picker when it comes to other people&#39;s magazines, but I was amused by what you said under the photograph of the aircraft carrier Intrepid in the autumn SEA HISTORY: &quot;This is the awesome sight a young Jim Ean saw when he first encountered Intrepid in the Pacific, 40 years ago.&quot; Well , no, it wasn&#39;t. She didn&#39;t get that hurricane bow until sometime in the 1950s, if memory serves me correctly, and that is borne out by other photographs in the same issue, showing her during World War II with the original open bow of all US carriers in that era. It is very seldom, indeed , that I can find an error in SEA HISTORY , even so minor an error as this one; so I write not in a spirit of negative criticism but in a spirit of fun . The magazine is first rate. Bravo Zulu. THOMAS FRENCH NORTON Annapolis, Maryland Mr. Norton (who signs himself &quot;not without sin&#39;J is quite right about Intrepid&#39;s bow. It was changed to the closed-in type used in the British navy following heavyweather experience in World War II, and steam catapults and angled flight deck (also Royal Navy innovations, oddly SEA HISlDRY, SPRING 1985

enough) were also added. So what we showed was not what young Jim E:an saw!-ED.

&quot;My Little Morrissey...&quot; Your article &quot;The Quest for the Truth of the Ernestina/Morrissey &quot; in SH34 omitted an interesting part of her story, when during World War II Captain Bob Bartlett was hired by the Army to take the Morrissey north in the Atlantic to report the presence of German submarines, by Army installed and operated radio. In those days submarines had to surface to recharge their batteries. The Morrissey was mistakenly thought by the German submarine commanders to be a harmless fishing schooner, therefore they paid little attention to her. I became acquainted with Captain Bartlett and his ship when I was assigned to the Boston Port of Embarkation as Radio Officer during the latter part of the war after my duty in Africa and Europe. The Morrissey had just returned to resupply after one of her missions. Her Signal Corps radio was a little too small and we replaced it with a more powerful one, fitting it into a sail locker with less than an inch to spare. Captain Bob also wanted a new set of batteries. At that time a new bank of 32-volt batteries was very expensive and I questioned the need for them . I well remember his comment &quot; My little Morrissey, she&#39;s all I&#39;ve got.&quot; I was overruled and he got his new set of batteries. HAROLD C. POITER, Lt . Col. AUS (Ret. ) York Beach, Maine

A chastened Mr. Herbert offers apologies to us, Mr. McCloskey, and the world, and appends the above picture of a Baldt anchor, which he drew for the Girl Mariner troop he used to teach aboard your editor&#39;s schooner sailing out of South Street Seaport. -ED.

This Vast Goal All my life I have been interested in tall ships, especially in clipper ships like the Flying Cloud and the Sea Witch. I have been sailing on many square riggers, and my dream is to have a replica clipper made. If you could help me in achieving this vast goal I would be deeply appreciative. FRANK WOUTERS San Clemente, California The National Society supports Melbourne Smith&#39;s Project Sea Witch, to build a full-scale successor vessel to the 1840s clipper, first ship to round the Horn in under 100 days. Write Melbourne at PO Box 54, Annapolis MD 21404-ED.

My Dory Which Was Lost, Is Found So far I haven&#39;t received a request for renewal, but I don&#39;t want to become a lost dory, so here is $30: $20 for membership and $10 for wherever it&#39;s needed most. Please make sure I&#39;m not missed when SEA H!STORYS are mailed next! MIKE FLANNERY Syracuse, New York Mr. Flannery&#39;s extra contribution will go to support our membership drive-SEA HISTORY being a rare gift that becomes more valuable, the more widely it is shared-ED.

A Nit-picker Is Brought to Book! Referring to page 4 of SH34, it is indeed interesting to note that self-described &quot; nit-picker&quot; Robert G. Herbert , Jr. , is himself not infallible. Please note that Mr. Herbert refers, in two instances, to Balt anchors. He, of all people, should know that the name is Baldt, not Balt. Baldt, Incorporated , PO Box 350, Chester, Pennsylvania 19016, maintains (according to their advertising) the &quot; largest stock of anchors and anchor chain in the world-all sizes and weights-new, used , reconditioned and surplus. Immediate shipment available from stocking locations around the world .&quot; The prestigious Baldt firm produces various patterns of anchor and also offers anchoring, towing, chasing and retrieval systems. Baldt, you see, is a big name in the seafaring world . BRUCE B. MCCLOSKEY Fort Lauderdale, Florida

ERRATUM: John Henry Frazier, author of Early Maritime Artists of the Pacific Northwest Coast, 1741-1841, published by the University of Washington Press last fall, points out that in the excerpts we published from this important work in SH33, we confused a couple of captions. &quot;Harbour of St. Paul in the Island of Cadiak,&quot; on page 38 properly goes with the picture on the facing page, bottom, which masquerades under the false title &quot;View of Port Desengano,&quot; which was not reproduced in SEA HISTORY. The correct caption for the drawing on page 38 is &quot;View of Sitka Bay, from the governor&#39;s house,&quot; lithograph of a drawing by F.H. von Kittlitz, in Litke, atlas to Voyage, pl. 3 (copy of Tsar Nicolai I) ; courtesy Lilly Library, Indiana University. Our apologies to Mr. Henry and to all hands. -ED. 3