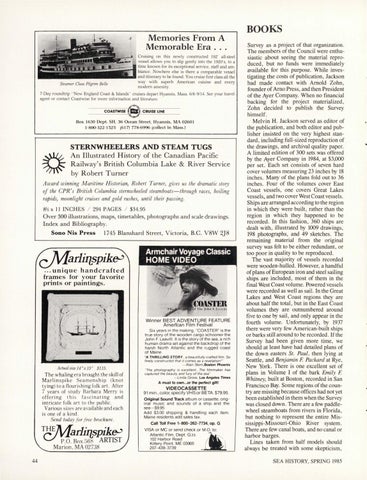 Memories From A Memorable Era ... Cruising on thi s newly constructed 192&#39; all-steel vessel allows you to slip gently into the 1920&#39;s, to a time known for its exceptional service, staff and ambiance. Nowhere else is there a comparable vessel and itinerary to be found. You crui se first class all the way with superb American cuisine and every modem amenity. ·

C)\{farlirispike-&#39; ... unique handcrafted frames for your favorite prints or paintings.

The whaling era brought the skill of Marlin spike Seamens hip (knot tying) to a fl ouri shing folk art. After 7 yea rs of stud y Barbara Merry is offering thi s fasc inating a nd intricate folk art to the public. Various sizes are available and each is one of a kind . Send today for free brochure.

Winner BEST ADVENTURE FEATURE American Film Festival Six years in the making , &quot;COASTER&quot; is the true story of the wooden cargo schoone r the John F. Leavitt . It is the story of the sea , a ri ch human drama set against the backdrop of the harsh North Atlantic and the rugged coast of Maine. &quot;A THRILLING STORY... a beautilully crafted film. So finely constructed that 11 comes as a revelation&#39;&quot; - Alan Stern .Boston Phoenix &quot; The photography 1s excellent... The filmmaker has captured the beauty and fury of the sea·· - Linda Gross. Los Angeles Times

A must to own ...or the perfect gilt!

Survey as a project of that organization. The members of the Council were enthusiastic about seeing the material reproduced , but no funds were immediately available for this purpose. While investigating the costs of publication, Jackson had made contact with Arnold Zohn, founder of Arno Press, and then President of the Ayer Company. When no financial backing for the project materialized , Zohn decided to publish the Survey himself. Melvin H. Jackson served as editor of the publication, and both editor and publisher insisted on the very highest standard, including full-sized reproduction of the drawings, and archival quality paper. A limited edition of 300 sets was offered by the Ayer Company in 1984, at $3,000 per set. Each set consists of seven hard cover volumes measuring 23 inches by 18 inches. Many of the plans fold out to 36 inches. Four of the volumes cover East Coast vessels, one covers Great Lakes vessels, and two cover West Coast vessels. Ships are arranged according to the region in which they were built, rather than the region in which they happened to be recorded. In this fashion, 360 ships are dealt with, illustrated by 1009 drawings, 198 photographs, and 49 sketches. The remaining material from the original survey was felt to be either redundant, or too poor in quality to be reproduced. The vast majority of vessels recorded were wooden-hulled. However, a handful of plans of European iron and steel sailing ships are included , most of them in the final West Coast volume. Powered vessels were recorded as well as sail. In the Great Lakes and West Coast regions they are about half the total, but in the East Coast volumes they are outnumbered around five to one by sail , and only appear in the fourth volume. Unfortunately, by 1937 there were very few American-built ships or barks still around to be recorded . If the Survey had been given more time, we should at least have had detailed plans of the down easters St. Paul, then lying at Seattle, and Benjamin F Packard at Rye, New York . There is one excellent set of plans in Volume I of the bark Emily F Whitney, built at Boston, recorded in San Francisco Bay. Some regions of the country are missing because offices had not yet been established in them when the Survey was closed down. There are a few paddlewheel steamboats from rivers in Florida, but nothing to represent the entire Mississippi-Missouri-Ohio River system. There are few canal boats, and no canal or harbor barges. Lines taken from half models should always be treated with some skepticism, SEA HIS1DRY, SPRING 1985