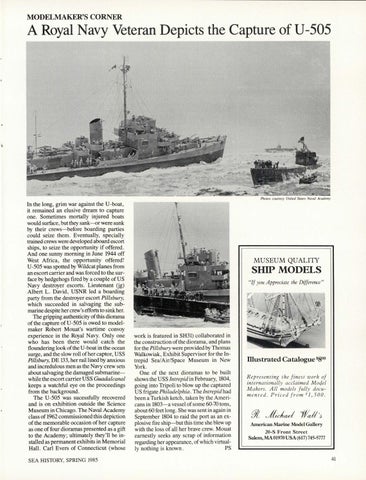 A Royal Navy Veteran Depicts the Capture of U-505

In the long, grim war against the U-boat , it remained an elusive dream to capture one. Sometimes mortally injured boats would surface, but they sank-or were sunk by their crews-before boarding parties could seize them . Eventually, specially trained crews were developed aboard escort ships, to seize the opportunity if offered. And one sunny morning in June 1944 off West Africa , the opportunity offered! U-505 was spotted by Wildcat planes from an escort carrier and was forced to the surface by hedgehogs fired by a couple of US Navy destroyer escorts. Lieutenant (jg) Albert L. David , USNR led a boarding party from the destroyer escort Pillsbury, which succeeded in salvaging the submarine despite her crew&#39;s efforts to sink her. The gripping authenticity of this diorama of the capture of U-505 is owed to modelmaker Robert Mouat&#39;s wartime convoy experience in the Royal Navy. Only one who has been there would catch the floundering look of the U-boat in the ocean surge, and the slow roll of her captor, USS Pillsbury, DE 133, her rail lined by anxious and incredulous men as the Navy crew sets about salvaging the damaged submarinewhile the escort carrier USS Guadalcanal keeps a watchful eye on the proceedings from the background. The U-505 was sucessfully recovered and is on exhibition outside the Science Museum in Chicago. The Naval Academy class of 1962 commissioned this depiction of the memorable occasion of her capture as one of four dioramas presented as a gift to the Academy; ultimately they&#39;ll be installed as permanent exhibits in Memorial Hall. Carl Evers of Connecticut (whose SEA HISTORY, SPRING 1985

work is featured in SH31) collaborated in the construction of the diorama, and plans for the Pillsbury were provided by Thomas Walkowiak, Exhibit Supervisor for the Intrepid Sea/Air/Space Museum in New York . One of the next dioramas to be built shows the USS Intrepid in February, 1804, going into Tripoli to blow up the captured US frigate Philadelphia. The Intrepid had been a Turkish ketch , taken by the Americans in 1803-a vessel of some 60-70 tons , about 60 feet long. She was sent in again in September 1804 to raid the port as an explosive fire ship-but this time she blew up with the loss of all her brave crew. Mouat earnestly seeks any scrap of information regarding her appearance, of which virtually nothing is known. PS