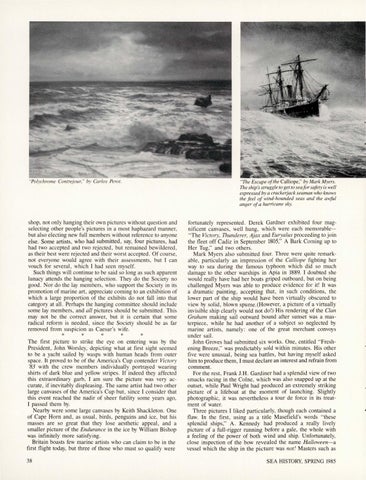 &quot;7h.e Escape of th e Calliope,&quot; by Mark Myers. The ship&#39;s struggle to get to sea fo r safety is well expressed by a crackerjack seaman who knows the feel of wind-hounded seas and 1he awful anger of a hurricane sky.

sho p, not only hanging the ir own pictures without question and selecting other peo ple&#39;s pictures in a most haphazard ma nner, but also e lecting new full me mbers without reference to a nyone else. Some artists , who had submitted, say, four pictures, had had two accepted and two rejected , but remained bewildered , as their best were rejected and their worst accepted. Of course, not everyo ne would ag ree with their assessments, but I can vouch for several, whi ch I had seen myself. Such things wi ll continu e to be said so long as such appa rent lunacy atte nds the hanging selection. They do the Society no good. Nor do the lay members, who support the Society in its promotio n of marine art, appreciate comi ng to an exhib ition of which a large proportio n of the exhibits do not fall into that catego ry at all . Perhaps the hang ing committee should include some lay me mbe rs, and all pictures should be submitted. This may not be the correct answer, but it is certain that some radical reform is needed , si nce the Society should be as far re moved from suspicio n as Caesa r&#39;s w ife.

The first picture to strike the eye o n enteri ng was by the President , John Worsley, depicting w hat at first sight seemed to be a yacht sailed by wasps with human heads from outer space. It proved to be of the Ame ri ca&#39;s Cup contender Victory &#39;83 with the c rew members individually portrayed wearing shirts of dark blue and yellow stripes. If indeed they affected this extraordinary garb, I am sure the picture was ve ry acc urate, if inevitabl y di spleasing. The same artist had two other large canvases of the America&#39;s Cup but , si nce I cons ider that this event reached the nadir of sheer futility some years ago, I passed them by. Nearby were some large canvases by Ke ith Shackleton. One of Cape Ho rn a nd , as usual , birds , penguins a nd ice, but his masses are so great that they lose aestheti c a ppeal, and a smalle r picture of the Endurance in the ice by William Bishop was infinitely more satisfying. Britain boasts few marine arti sts who ca n claim to be in the first flight today, but three of th ose who must so quali fy were

fort un ately represe nted. D erek Gardner exhibited four magni ficent canvases, well hung, which were each memorable&quot; The Victory, Thunderer, Ajax and Euryalus proceeding to join the fleet off C adiz in September 1805,&quot; A Bark Coming up to Her Tug,&quot; and two others. Mark Myers also su bmitted fo ur. Three we re quite remarkab le, particularly an impressio n of the Calliope fighting her way to sea during the famous typhoon which did so much damage to the othe r warships in Apia in 1889. I doubted she would reall y have had her boats g riped outboard , but on being challenged Myers was able to produce evide nce for it! It was a dramatic painting, accepting that , in such co nditio ns, the lower part of the ship would have been virtually obscured to view by solid , blown spume.(Howeve r, a picture of a virtually invisible ship clearly would no t do!) His rendering of the Clan Graham maki ng sail outward bound after sunset was a maste rp iece, w hile he had another of a subj ect so neglected by marine artists, namely: one of the g reat merchant convoys under sail. John G roves had submitted six works . One, e ntitled &quot; Fres he ning Breeze,&#39;&#39; was predictably sold within minutes . His other five were unusual , being sea battles, but having myself asked him to produce them, I must declare an interest and refrain from comment . Fo r the rest , Frank J.H . Gardiner had a sple ndid view of two smac ks racing in the Caine, w hich was also snapped up at the o utset, while Paul Wright had produced an extremely striking picture of a lifeboat at the moment of launching . Slightly photographic, it was neverthe less a tour de force in its treatment of wate r. Three pictures I liked particularly, though each contained a flaw. [n the first , using as a title Masefield &#39;s words &quot; these splend id ships,&#39; &#39; A. Kennedy had produced a really live ly picture of a full -rigger running befo re a gale, the whole with a feeling of the power of both wind and ship. Unfortunately, close inspecti o n of the bow revealed the name Halloween-a vessel which the ship in the pic ture was not! Masters such as SEA HISTORY, SPRING 1985