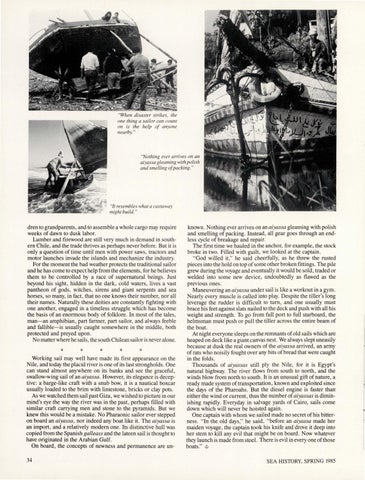 &quot;When disaster strikes , the one thing a sailor can count on is the help of anyone nearby.&quot;

dren to grandparents , and to assemble a whole cargo may require weeks of dawn to dusk labor. Lumber and firewood are still very much in demand in southern Chile, and the trade thrives as perhaps never before. But it is only a question of time until men with power saws, tractors and motor launches invade the islands and mechanize the industry. For the moment the bad weather protects the traditional sailor and he has come to expect help from the elements, for he believes them to be controlled by a race of supernatural beings. Just beyond his sight, hidden in the dark, cold waters, lives a vast pantheon of gods, witches, sirens and giant serpents and sea horses, so many, in fact, that no one knows their number, nor all their names . Naturally these deities are constantly fighting with one another, engaged in a timeless struggle which has become the basis of an enormous body of folklore. In most of the tales , man-an amphibian , part farmer, part sailor, and always feeble and fallible-is usually caught somewhere in the middle, both protected and preyed upon. No matter where he sails, the south Chilean sailor is never alone.

Working sail may well have made its first appearance on the Nile, and today the placid river is one of its last strongholds. One can stand almost anywhere on its banks and see the graceful , swallow-wing sail of an aiyassa . However, its elegance is deceptive: a barge-like craft with a snub bow, it is a nautical boxcar usually loaded to the brim with limestone, bricks or clay pots. As we watched them sail past Giza, we wished to picture in our mind&#39;s eye the way the river was in the past, perhaps filled with similar craft carrying men and stone to the pyramids. But we knew this would be a mistake. No Pharaonic sailor ever stepped on board an aiyassa, nor indeed any boat like it. The aiyassa is an import, and arelatively modern one. Its distinctive hull was copied from the Spanish galleass and the lateen sail is thought to have originated in the Arabian Gulf. On board , the concepts of newness and permanence are un34

known . Nothing ever arrives on an aiyassa gleaming with polish and smelling of packing. Instead, all gear goes through an endless cycle of breakage and repair. The first time we hauled in the anchor, for example, the stock broke in two. Filled with guilt, we looked at the captain. &quot; God willed it,&quot; he said cheerfully, as he threw the rusted pieces into the hold on top of some other broken fittings . The pile grew during the voyage and eventually it would be sold, traded or welded into some new device, undoubtedly as flawed as the previous ones. Maneuvering an aiyassa under sail is like a workout in a gym . Nearly every muscle is called into play. Despite the tiller&#39;s long leverage the rudder is difficult to turn , and one usually must brace his feet against slats nailed to the deck and push with all his weight and strength . To go from full port to full starboard , the Âˇ helmsman must push or pull the tiller across the entire beam of the boat. At night everyone sleeps on the remnants of old sails which are heaped on deck like a giant canvas nest. We always slept uneasily because at dusk the real owners of the aiyassa arrived , an army of rats who noisily fought over any bits of bread that were caught in the folds. Thousands of aiyassas still ply the Nile, for it is Egypt&#39;s natural highway. The river flows from south to north , and the winds blow from north to south . It is an unusual gift of nature, a ready made system of transportation, known and exploited since the days of the Pharoahs. But the diesel engine is faster than&#39; either the wind or current , thus the number of aiyassas is diminishing rapidly. Everyday in salvage yards of Cairo, sails come down which will never be hoisted again. One captain with whom we sailed made no secret of his bitterness . &quot;In the old days,&quot; he said , &quot;before an aiyassa made her maiden voyage, the captain took his knife and drove it deep into her stem to kill any evil that might be on board . Now whatever they launch is made from steel. There is evil in every one of those boats.&quot; &#39;1t SEA HISTORY, SPRING 1985