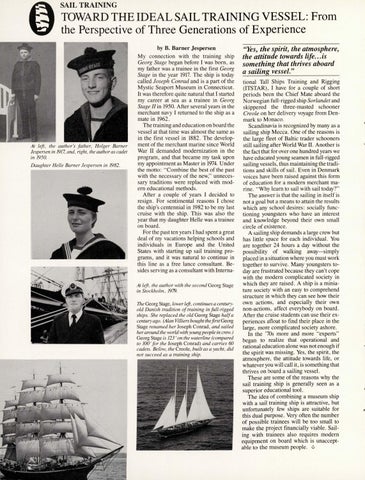 TOWARD THE IDEAL SAIL TRAINING VESSEL: From the Perspective of Three Generations of Experience by B. Barner Jespersen

My connection with the training ship Georg Stage began before I was born , as my father was a trainee in the first Georg Stage in the year 1917. The ship is today called Joseph Conrad and is a part of the Mystic Seaport Museum in Connecticut. It was therefore quite natural that I started my career at sea as a trainee in Georg Stage II in 1950. After several years in the merchant navy I returned to the ship as a mate in 1962 . The training and education on board the vessel at that time was almost the same as in the first vessel in 1882 . The development of the merchant marine since World War II demanded modernization in the program , and that became my task upon my appointment as Master in 1974. Under the motto : &quot;Combine the best of the past with the necessary of the new,&quot; unnecessary traditions were replaced with modern educational methods. After a couple of years I decided to resign. For sentimental reasons I chose the ship&#39;s centennial in 1982 to be my last cruise with the ship. This was also the year that my daughter Helle was a trainee on board . For the past ten years I had spent a great deal of my vacations helping schools and individuals in Europe and the United States with starting up sail training programs, and it was natural to continue in this line as a free lance consultant. Besides serving as a consultant with InternaAt left, the author with the second Georg Stage in Stockholm , 1979. The Georg Stage, lower left, continues a centuryold Danish tradition of training in full-rigged ships. She replaced the old Georg Stage halfa century ago. (Alan Villiers bought the first Georg Stage renamed her Joseph Conrad , and sailed her around the world with young people in crew.) Georg Stage is 123 &#39; on the waterline (compared to JOO &#39; for the Joseph Conrad) and carries 60 cadets. Be lbw, the Creole, built as a yacht, did not succeed as a training ship.

&quot;les, the spirit, the atmosphere, the attitude towards life ... is something that thrives aboard a sailing vessel.&quot; tional Tall Ships Training and Rigging (ITSTAR), I have for a couple of short periods been the Chief Mate aboard the Norwegian full-rigged ship Sorlandet and skippered the three-masted schooner Creole on her delivery voyage from Denmark to Monaco. Scandinavia is recognized by many as a sailing ship Mecca . One of the reasons is the large fleet of Baltic trader schooners still sailing after World War II. Another is the fact that for over one hundred years we have educated young seamen in full-rigged sailing vessels , thus maintaining the traditions and skills of sail. Even in Denmark voices have been raised against this form of education for a modern merchant marine. &quot; Why learn to sail with sail today?&quot; The answer is that the sailing in itself is not a goal but a means to attain the results which any school desires: socially functioning youngsters who have an interest and knowledge beyond their own small circle of existence. A sailing ship demands a large crew but has little space for each individual . You are together 24 hours a day without the possibility of walking away-simply placed in a situation where you must work together to survive. Many youngsters today are frustrated because they can&#39;t cope with the modern complicated society in which they are raised. A ship is a miniature society with an easy to comprehend structure in which they can see how their own actions, and especially their own non-actions, affect everybody on board . After the cruise students can use their experiences afloat to find their place in the large, more complicated society ashore. In the &#39;70s more and more &quot;experts&quot; began to realize that operational and rational education alone was not enough if the spirit was missing . Yes, the spirit, the atmosphere, the attitude towards life, or whatever you will call it, is something that thrives on board a sailing vessel. These are some of the reasons why the sail training ship is generally seen as a superior educational tool. The idea of combining a museum ship with a sail training ship is attractive, but unfortunately few ships are suitable for this dual purpose. Very often the number of possible trainees will be too small to make the project financially viable. Sailing with trainees also requires modern equipment on board which is unacceptable to the museum people. &lt;t