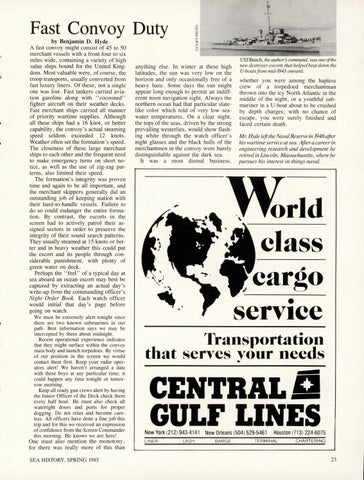 Fast Convoy Duty by Benjamin D. Hyde A fast convoy might consist of 45 to 50 merchant vessels with a front four to six miles wide, containing a variety of high value ships bound for the United Kingdom. Most valuable were, of course, the troop transports, usually converted from fast luxury liners. Of these , not a single one was lost. Fast tankers carried aviation gasoline along with &quot;cocooned&quot; fighter aircraft on their weather decks. Fast merchant ships carried all manner of priority wartime supplies. Although all these ships had a 16 knot, or better capability, the convoy&#39;s actual steaming speed seldom exceeded 12 knots. Weather often set the formation &#39;s speed. The closeness of these large merchant ships to each other and the frequent need to make emergency turns on short notice, as well as the use of zig-zag patterns, also limited their speed. The formation&#39;s integrity was proven time and again to be all important, and the merchant skippers generally did an outstanding job of keeping station with their hard-to-handle vessels. Failure to do so could endanger the entire formation. By contrast, the escorts in the screen had to actively patrol their assigned sectors in order to preserve the integrity of their sound search patterns. They usually steamed at 15 knots or better and in heavy weather this could put the escort and its people through considerable punishment, with plenty of green water on deck. Perhaps the &quot;feel&quot; of a typical day at sea aboard an ocean escort may best be captu red by extracting an actual day&#39;s write-up from the commanding officer &#39;s Night Order Book. Each watch officer would initial that day&#39;s page before going on watch. We must be extremely alert tonight since there are two known submarines in our path. Best information says we may be intercepted by them about midnight. Recent operational experience indicates that they might surface within the convoy main body and launch torpedoes. By virtue of our position in the screen w_e would contact them first. Keep your radar operators alert! We haven &#39;t arranged a date with these boys at any particular time; it could happen any time tonight or tomorrow morning. Keep all ready gun crews alert by having the Junior Officer of the Deck check them every half hour. He must also check all watertight doors and ports for proper dogging . Do not relax and become careless. All officers have done a fine job this trip and for this we received an expression of confidence from the Screen Commander this morning. He knows we are here! One must also mention the monotony , for there was really more of this than SEA HISTORY, SPRING 1985

anything else . In winter at these high latitudes , the sun was very low on the horizon and only occasionally free of a heavy haze. Some days the sun might appear long enough to permit an indifferent noon navigation sight. Always the northern ocean had that particular slatelike color which told of very low seawater temperatures. On a clear night, the tops of the seas , driven by the strong prevailing westerlies , would show flashing white through the watch officer&#39; s night glasses and the black hulls of the merchantmen in the convoy were barely distinguishable against the dark sea. It was a most dismal business ,

whether you were among the hapless crew of a torpedoed merchantman thrown into the icy North Atlantic in the middle of the night, or a youthful submariner in a U-boat about to be crushed by depth charges; with no chance of escape, you were surely fin ished and faced certain death. Mr. Hyde left the Naval Reserve in 1946after his wartime service at sea. After a career in engineering research and development he retired in Lincoln, Massachusetts, where he pursues his interest in things naval.