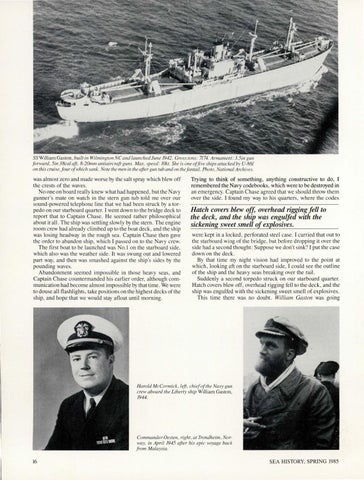 was almost zero and made worse by the salt spray which blew off the crests of the waves. No one on board reall y knew what had hap pened, but the Navy gunner&#39;s mate on watch in the stern gun tub told me over our sound-powered telephone line that we had been stru ck by a torpedo on our starboard quarter. I went down to the bridge deck to report that to Captain Chase. He seemed rather philosophical about it all. The ship was settling slowly by the stern . The eng ine room crew had already cl imbed up to the boat deck , and the ship was los ing headway in the rough sea . Captai n Chase then gave the order to abandon ship, which I passed on to the Navy crew. The first boat to be launched was No.I on the starboard side, which also was the weather side. It was swung out and lowered part way, and then was smashed aga inst the ship&#39;s sides by the pounding waves . Abandonment seemed impossible in those heavy seas, and Captain Chase co untermanded his earlier order, although communicati on had become almost imposs ible by that time. We were to douse all fl ashlights, take positions on the highest decks of the ship, and hope that we would stay afloat until morning.

Trying to think of something, anything constructive to do, I remembered the Navy codebooks, which were to be destroyed in an emergency. Captain Chase agreed th at we should throw th em over the side . I found my way to his qua rte rs, where th e codes

Hatch covers blew off, overhead rigging fell to the deck, and the ship was engulfed with the sickening sweet smell of explosives. were kept in a locked , perforated steel case . I carried that out to the starboa rd wing of the bridge, but before dropping it over the side had a second th ought : Suppose we don&#39;t sink? I put th e case down on the deck. By that time my ni ght vision had improved to th e point at which, looking aft on the starboa rd side, I could see the outline of the ship and the heavy seas breaking over the rail. Suddenly a second torpedo struck on our starboa rd quarter. Hatch covers blew off, overhead rigging fe ll to the deck , and the ship was engulfed w ith the sickeni ng sweet smell of expl os ives. This time th ere was no doubt. William Gaston was going

Commander Oes/en, rig/11, a1 Trondh eim , Norway, in April 1945 after his epic voyage back from Malaysia.