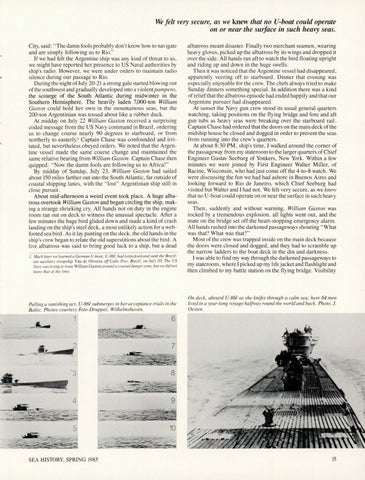 We felt very secure, as we knew that no U-boat could operate on or near the surface in such heavy seas. City, said : &quot; The damn fools probably don&#39;t know how to navigate and are simply following us to Rio.&quot; If we had felt the Argentine ship was any kind of threat to us, we might have reported he r presence to US Naval autho rities by ship&#39;s radio. However, we were under orders to maintain radio silence during our passage to Rio. During the night of July 20-21 a strong gale started blowing out of the southwest and grad uall y developed into a violent pampero, the scourge of the South Atlantic during midwinter in the Southern Hemisphere. The heavily laden 7,000-ton William Gaston could hold her own in the mountainous seas, but the 200-ton Argentinian was tossed about like a rubber duck. At midday on July 22 William Gaston received a surprising coded message from the US Navy command in Braz il , ordering us to change course nearly 90 degrees to starboard , or from northerl y to easterly.&#39; Captain Chase was confounded and irritated , but nevertheless obeyed orders . We noted that the Argentine vessel made the same course change and maintained the same relative bearing from William Gaston. Captain Chase then quipped: &quot;Now the damn fools are following us to Africa!&quot; By midday of Sunday, Jul y 23, William Gaston had sailed about 150 miles fa rther out into the South Atlantic, far outside of coastal shipping lanes , with the &quot; lost&quot; Argentinian ship still in close pursuit. About mid-afternoon a weird event took place. A huge albatross overtook William Gaston and began circling the ship, making a strange shrieking cry. All hands not on duty in the engine roo m ra n out on deck to witness the unusual spectacle. After a few minutes the huge bird glided down and made a kind of crash landing on the ship&#39;s steel deck , a most unli kely action for a webfoo ted sea bird. As it lay panting on the deck , the old hands in the ship&#39;s crew began to relate the old superstitions about the bird. A live albatross was said to bring good luck to a ship, but a dead /. M11ch later we lea rned a German U-boat, U-861 , had torpedoed and sunk the Brazilian aiuiliary troopship Vita de Olive ira aff Caba Frio, Brazil, 0 11 Ju ly 20. Th e US Navy HÂˇas trying to route Wi ll iam Gasto n around a coasral danger zone, bur we did nor k t10\\1 thar at rhe tim e.

albatross meant disaster. Finally two merchant seamen, wearing heavy gloves , picked up the albatross by its wings and dropped it over the side. All hands ran aft to watch the bird floating upright and riding :.ip and down in the huge swells. Then it was noticed that the Argentine vessel had disappeared , apparently veeri ng off to starboard . Dinner that evening was es pec ially enjoyable for the crew. The chefs always tried to make Sunday dinners something special. In addition there was a kind of relief that the albatross episode had ended happil y and that our Argentine pursuer had disappeared . At sunset the Navy gun crew stood its usual general quarters watching, taking positions on the fl ying bridge and fore and aft gun tubs as heavy seas were breaking over the starboard rail. Captain Chase had ordered that the doors on the main deck of the midship house be closed and dogged in order to prevent the seas from ru nning into the crew&#39;s quarters . At about 8:30 PM , ship&#39;s time, I walked around the corner of the passageway from my stateroom to the larger quarters of Chief Engineer Gustav Seeburg of Yonkers, New York . Within a few minutes we were j oined by First Engineer Walter Miller, of Raci ne, Wisconsin , who had just come off the 4-to-8 watch. We were discussi ng the fun we had had ashore in Buenos Aires and looking forward to Rio de Janeiro, which Chief Seeburg had visited but Walter and I had not. We felt very secure, as we knew that no U-boat could operate on or near the surface in such heavy seas. Then , suddenly and without warning, William Gaston was rocked by a tremendous explosion . all lights went out , and the mate on the bridge set off the heart-stopping emergency alarm. All hands rushed into the darkened passageways shouting &quot;What was that? What was that?&quot; Most of the crew was trapped inside on the main deck because the doors were closed and dogged , and they had to scramble up the narrow ladders to the boat deck in the din and darkness. I was ab le to find my way through the darkened passageways to my stateroom, where I picked up my life jacket and flashlight and then climbed to my battle station on the flying bridge. Visibility

Pulling a vanishing act, U-861 submerges in her acceptance trials in the Baltic. Photos courtesy Foto-Druppel, Wi/h elmsha ven.

On deck , aboard U-861 as she knifes through a calm sea ; here 64 men li ved in a year-long voyage halfway round the world and back. Photo, J. Oesten.