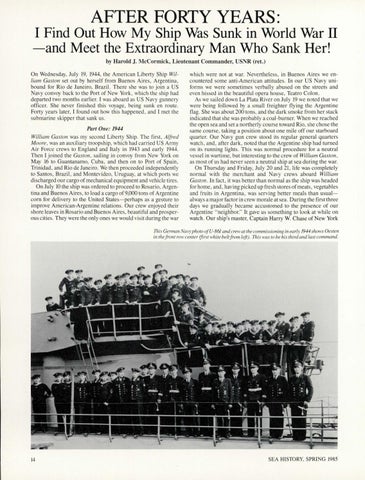 AFTER FORTY YEARS: I Find Out How My Ship Was Sunk in World War II -and Meet the Extraordinary Man Who Sank Her! by Harold J. McCormick, Lieutenant Commander, USNR (ret.) On Wedn esday, Jul y 19, 1944, the Ameri can Liberty Ship William Gaston set out by herself from Buenos A ires , Argentina , bound fo r Ri o de Janeiro, Braz il . T here she was to join a US Navy convoy bac k to the Port of New York, which the ship had departed two months earlier. I was aboard as US Navy gunnery offi cer. She never fini shed this voyage, be ing sunk en route. Fo rty yea rs later, I fo und out how this happened, and I met th e submarine skipper th at sank us.

Part One: 1944 William Gaston was my second Liberty Ship. The first , Alfred Moo re, was an auxiliary troopship, which had carried US Army A ir Force crews to England and Italy in 1943 and earl y 1944. Then I j oined the Gaston , sailing in convoy fro m New Yo rk on May 16 to Guantanamo, Cuba , and then on to Port of Spain , Trinidad , and Ri o de Janeiro. We then proceeded independentl y to Santos , Braz il , and Montevideo, U ruguay, at which ports we di scharged our cargo of mechanical eq uipment and vehicle ti res. On Jul y 10 the ship was ordered to proceed to Rosario, A rgentina and Buenos A ires , to load a cargo of9,000 tons of A rgent ine corn fo r deli ve ry to the United States- perhaps as a gesture to imp rove Ame ri can-A rgentine relati ons. Our crew enj oyed their shore leaves in Rosari o and Buenos Aires , beautifu l and prosperous cities . They we re the onl y ones we would visit during the war

which were not at war. Neve rtheless, in Buenos Aires we enco untered some anti-Ameri can attitudes. In our US Navy unifo rms we we re sometimes ve rball y abused on the streets and even hissed in the beautiful opera house, Teatro Colon. As we sailed down La Pl ata Ri ver on Jul y 19 we noted th at we we re being fo llowed by a small fre ighter fl ying the A rgentine fl ag. She was about 200 tons, and the dark smoke fro m her stac k ind icated th at she was probab ly a coal-burner. When we reac hed th e open sea and set a northerl y course toward Ri o, she chose the same course, taking a pos ition about one mile off our sta rboard qu arter. Our Navy gun crew stood its regular general qu arters watch, and , after dark , noted that the Argentine ship had turned on its running lights. Thi s was no rm al procedure for a neutral vessel in wa rtime, but interesting to th e crew of William Gaston , as most of us had never seen a neut ral ship at sea during the wa r. O n T hursday and Friday, Jul y 20 and 21, life was completely normal with the merchant and Navy crews aboard William Gaston. In fac t , it was better than normal as the ship was headed fo r home, and, hav ing picked up fres h stores of meats, vegetab les and fruits in Argenti na , was serving better meals than usualalways a major fac tor in crew morale at sea. During the first three days we gradu all y became accustomed to the presence of our A rgentine &quot; neighbor.&quot; It gave us something to look at whil e o n watch. Our ship&#39;s master, Captain Harry W. Chase of New Yo rk

This German Navy photo of U-861 and crew at the commissioning in early 1944 shows Oesten in the front row center (first white belt f rom left). This was to be his third and last command.