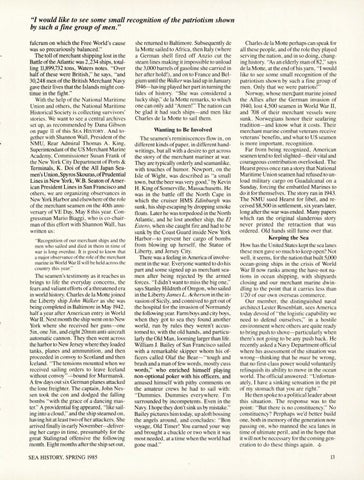 &quot;I would like to see some small recognition of the patriotism shown by such a fine group of men.&quot; fulcrum on which the Free Wo rld&#39;s cause was so precariously balanced .&quot; The toll of merchant shipping lost in the Battle of the Atlantic was 2,234 ships, totalling 11,899,732 tons, Waters notes. &quot; Over half of these were British,&quot; he says, &quot;and 30,248 men of the British Merchant Navy gave their lives that the Islands might continue in the fight.&quot; With the help of the National Maritime Union and others, the National Maritime Historical Society is co ll ecting survi vo rs&#39; stories. We wa nt to see a cent ra l archi ves set up, as recommended by Dana Gibson on page II of this SEA HISTORY. And together with Shannon Wall , Pres ident of the NMU, Rear Admiral Thomas A. King, Superintendant of the US Merchant Marine Academy, Commiss ioner Susan Fra nk of the New York C ity Department of Po rts &amp; Terminals, K . Doi of the All Japan Seamen&#39;s U nion,Spyros Skouras,of Prudential Lines in New York, W.B. Seaton of American President Lines in San Francisco and others, we are o rga ni zing observa nces in New York Harbor and elsewhere of the role of the merchant seamen on the 40th anniversa ry of YE Day, May 8 thi s yea r. Congress man Mario Biagg i, who is co-chairman of this effo rt with Shanno n Wall , has written us: &quot; Recog niti on of our merchant ships and the men w ho sa il ed and di ed in them in ti me of wa r is long overdue. It is good to know that a major observance of the ro le of the merchant marine in Worl d War II w ill be held across the country thi s yea r.&quot;

The seamen&#39;s testimony as it reaches us brings to life the everyday concerns, the fea rs and valiant efforts of a threatened era in wo rld history. Charles de la Motte joined the Liberty ship John Walker as she was being completed in Baltimore in May 1942, half a yea r after American entry in World War II . Next month the ship went on to New York where she received her guns- one Sin , one 3in , and eight 20mm anti-aircraft automatic cannon. They then went across the harbor to New Jersey where they loaded tanks, planes and ammunition, and then proceeded in convoy to Scotland and then Iceland. &quot;The tensions mounted when we received sa iling o rders to leave Iceland without convoy &quot; .....:..bound fo r Murmansk. A few days out six German planes attacked the lone freighter. The capta in , John Nessen took the con and dodged the fallin g bombs &quot; with the grace of a dancing master.&quot; A providential fog appeared , &quot; like sailing into a cloud ,&quot; and the ship steamed on , hav ing hit at least two of he r attackers. She arri ved finall y in earl y November- delivering her cargo in time, presumably for the great Stalingrad offensive the foll owing month . Eight months after the ship set out , SEA HISTORY, SPRING 1985

she returned to Bal timore. Subsequently de la Motte sailed to Africa , then Italy (where a German shell fired off A nzio cut the steam lines maki ng it impossible to unl oad the 3,000 barrels of gasoline she carri ed in her after hold !) , and on to France and Belgium until the l#zlkerwas laid up in January 1946- having played her part in turning the tides of history. &quot; She was conside red a lucky ship,&quot; de la Motte remarks, to which one can onl y add &quot;Amen!&quot; The nation can be glad it had such ships-and men li ke Charles de la Motte to sail them .

Wanting to Be Involved T he seamen&#39;s reminiscences fl ow in , on different kinds of paper, in different handwritings, but all with a des ire to get across the story of the merchant mariner at war. They are typically orderl y and seamanlike, with touches of humor. Newport , on the Isle of Wight , was described as &quot;a small town, but the beer was very good ,&quot; by Kevin H . King of Somerville, Massachusetts. He was in the battle off the No rth Cape in which the cruiser HMS &amp;linburgh was sunk, his ship escaping by dropping smoke floats. Later he was torpedoed in the No rth Atlantic, and he lost another ship, the El Estero, when she caught fire and had to be sunk by the Coast Guard inside New Yo rk Harbor- to prevent her cargo of bombs from blowing up herself, the Statue of Liberty, and Jersey City. There was a feeling in America of involvement in the war. Everyone wa nted to do -his part and some signed up as merchant seamen after be ing rej ected by the armed forces. &quot; I didn&#39;t want to miss the big one,&quot; says Stanley Hildreth of Oregon, who sailed in the Liberty Jam es L. Acherson in the invasion of Sicil y, and conni ved to get out of the hospital fo r the invas ion of No rm and y the following year. Farm boys and city boys, when they got to sea they fo und another world , run by rules they weren&#39;t accustomed to, with the old hands, and particularly the Old Man, looming larger than life. William 1. Bailey of San Fra ncisco sailed with a remarkable skippe r whom his offi cers called Ol af the Bear- &quot; tough and brash and a man offew wo rds, mostl y cuss words,&quot; who enriched himself play ing non-optional poker with his offi cers, and amused himself with pithy comments on the amateur crews he had to sai l with : &quot; Dummies. Dummies everyw here. I&#39;m surrounded by incompetents. Even in the Navy. I hope they don&#39;t sink us by mistake.&quot; Bailey pictures him today, up aloft bossing the angels around , and concludes : &quot; Bon voyage, Old Timer! You earned yo ur way and brought a chuckl e or two when it was most needed , at a time when the wo rld had gone mad .&quot;

Charles de la Motte perhaps can speak for all these people, and of the role they played serving the nation, and in so doing, changing history. &quot;As an elderl y man of82,&quot; says de la Motte, at the end of his yarn , &quot; I would like to see some small recognition of the patriotism show n by such a fi ne gro up of men. Onl y that we were patriots! &quot; Norway, whose mercpant marine joined the Allies after the German invas ion of 1940, lost 4,500 seamen in World War II , and 708 of the ir merchant vessels were sun k. No rwegians honor thei r seafaring tradition- and know what it costs. Their me rchant mari ne combat veterans receive veterans&#39; benefits, and what to US seamen is more important , recognition. Far from be ing recognized , Ameri can seamen tend to feel slighted- their vital and courageous contribution overl ooked . The Hearst press once ran a story that National Maritime Union seamen had refused to unload military cargo on Guadalcanal on a Sunday, fo rcing the embattled Marines to do it for themselves . The story ran in 1943. The NMU sued Hearst fo r libel , and received $8,500 in settlement, six years later, lo ng after the war was ended . Many papers which ran the orig inal slanderous story never printed the retraction that was o rdered. Old hands still fum e over that.

Keeping the Sea How has the United States kept the sea lanes these men gave s0 much to keep open? Not well , it seems, fo r the nation that built 5,000 ocean-going ships in the c risis of World War II now ra nks among the have- not nations in ocean shipping, with shipyards cl os ing and our merchant marine dwindling to the po int that it carries less than 1/20 of our own overseas commerce. Our member, the di stingui shed naval architect Lester Rosenblatt , sees America today devo id of &quot; the log istic capability we need to defend ourselves ,&quot; in a hostil e enviro nment where others are quite ready to bring push to shove- particul arl y when there&#39;s not go ing to be any push back. He recentl y as ked a Navy Department offi cial where his assess ment of the situation was wro ng- thinking that he must be wro ng, that no fi rst-class power would voluntaril y relinqui sh its ability to move in the ocean world . T he offi cial answered: &quot; U nfo rtunately, I have a sinking sensation in the pit of my stomach that yo u are right.&quot; He then spoke to a political leader about this situation. The res ponse was to the po int : &quot; But there is no constituency.&quot; No constituency? Perph aps we&#39;d better build one, both in memory of the generation now pass ing on, who manned the sea lanes in time of ultimate peril , and in the hope that it will not be necessary fo rthe coming generation to do these things aga in . w 13