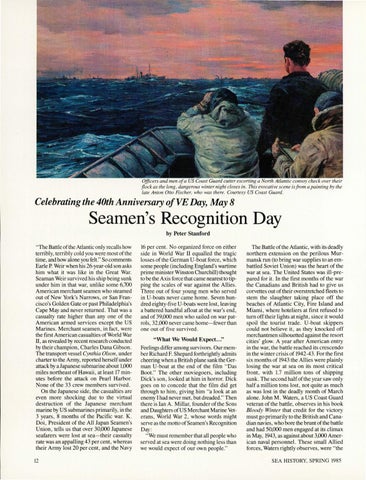 Officers and men of a US Coast Guard cutter escorting a North Atlantic convoy check over their flock as the long, dangerous winter night closes in. This evocative scene is from a painting by the late Anton Otto Fischer, who was there. Courtesy US Coast Guard.

Celebrating the 40th Anniversary of VE Day, May 8

Seamen's Recognition Day by Peter Stanford " The Battle of the Atlantic only recalls how terribly, terribly cold you were most of the time, and how alone you felt." So comments Earle P. Weir when his 26-year-old son asks him what it was like in the Great War. Seaman Weir survived his ship being sunk under him in that war, unlike some 6,700 American merchant seamen who steamed out of New York's Narrows, or San Francisco's Golden Gate or past Philadelphia's Cape May and never returned. That was a casualty rate higher than any one of the American armed services except the US Marines . Merchant seamen , in fact , were the first American casualties of World War II, as revealed by recent research conducted by their champion, Charles Dana Gibson . The transport vessel Cynthia Olson, under charter to the Army, reported herself under attack by a Japanese submarine about 1,000 miles northeast of Hawaii, at least 17 minutes before the attack on Pearl Harbor. None of the 33 crew members survived . On the Japanese side, the casualties are even more shocking due to the virtual destruction of the Japanese merchant marine by US submarines primarily, in the 3 years, 8 months of the Pacific war. K . Doi, President of the All Japan Seamen's Union , tells us that over 30,000 Japanese seafarers were lost at sea-their casualty rate was an appalling 43 per cent, whereas their Army lost 20 per cent, and the Navy 12

16 per cent. No organized force on either side in World War II equalled the tragic losses of the German U-boat force, which some people (including England's wartime prime minister Winston Churchill) thought to be the Axis force that came nearest to tipping the scales of war against the Allies. Three out of four young men who served in U-boats never came home. Seven hundred eighty-five U-boats were lost, leaving a battered handful afloat at the war's end, and of39,000 men who sailed on war patrols, 32 ,000 never came home-fewer than one out of five survived .

"What We Would Expect .. !' Feelings differ among survivors. Our member Richard F. Shepard forthrightly admits cheering when a British plane sank the German U-boat at the end of the film " Das Boot." The other moviegoers, including Dick's son , looked at him in horror. Dick goes on to concede that the film did get through to him , giving him "a look at an enemy I had never met, but dreaded." Then there is Ian A . Millar, founderofthe Sons and Daughters of US Merchant Marine Veterans, World War 2 , whose words might serve as the motto of Seamen's Recognition Day: "We must remember that all people who served at sea were doing nothing less than we would expect of our own people."

The Battle of the Atlantic, with its deadly northern extension on the perilous Murmansk run (to bring war supplies to an embattled Soviet Union) was the heart of the war at sea . The United States was ill-prepared for it. In the first months of the war the Canadians and British had to give us corvettes out of their overstretched fleets to stem the slaughter taking place off the beaches of Atlantic City, Fire Island and Miami, where hoteliers at first refused to turn off their lights at night, since it would spoil the tourist trade. U-boat skippers could not believe it , as they knocked off merchantmen silhouetted against the resort cities' glow. A year after American entry in the war, the battle reached its crescendo in the winter crisis of 1942-43. For the first six months of 1943 the Allies were plainly losing the war at sea on its most critical front, with 1.7 million tons of shipping sunk. The second half of the year saw only half a million tons lost , not quite as much as was lost in the deadly month of March alone. John M. Waters, a US Coast Guard veteran of the battle, observes in his book Bloody Winter that credit for the victory must go primarily to the British and Canadian navies, who bore the brunt of the battle and had 50,000 men engaged at its climax in May, 1943, as against about 3,000 American naval personnel. These small Allied forces, Waters rightly observes, were " the SEA HISTORY, SPRING 1985