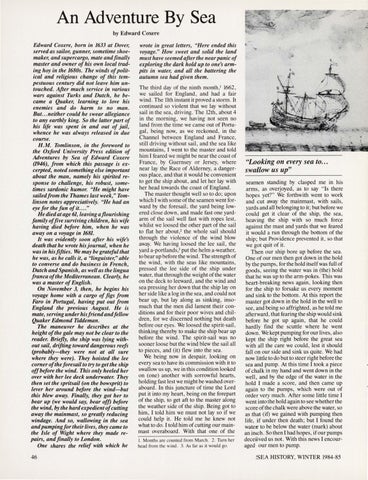 An Adventure By Sea by Edward Coxere

Edward Coxere, born in 1633 at Dover, served as sailor, gunner, sometime shoemaker, and supercargo, mate and finally master and owner of his own local trading hoy in the 1680s. The winds of political and religious change of this tempestuous century did not leave him untouched. After much service in various wars against Turks and Dutch, he became a Quaker, learning to love his enemies and do harm to no man. But ... neither could he swear allegiance to any earthly king. So the latter part of his life was spent in and out of jail, whence he was always released in due course. H.M. Tomlinson, in the foreword to the Oxford University Press edition of Adventures by Sea of Edward Coxere (1.946), from which this passage is excerpted, noted something else important about the man, namely his spirited response to challenge, his robust, sometimes sardonic humor. "He might have sailed from the Thames last week,'' Tomlinson notes appreciatively. "He had an eye for the fun of it ...." He died at age 61, leaving a.flourishing family offive surviving children, his wife having died before him, when he was away on a voyage in 1681. It was evidently soon after his wife's death that he wrote his journal, when he was in his fifties. We may be grateful that he was, as he calls it, a "linguister," able to converse and do business in French, Dutch and Spanish, as well as the lingua franca ofthe Mediterranean. Clearly, he was a master of English. On November 3, then, he begins his voyage home with a cargo of figs from Faro in Portugal, having put out from England the previous August. He is mate, serving under his friend and fellow Quaker Edmond Tiddeman. The maneuver he describes at the height of the gale may not be clear to the reader. Briefly, the ship was lying without sail, drifting toward dangerous reefs (probably-they were not at all sure where they were). They hoisted the lee corner ofthe foresail to try to get the ship off before the wind. This only heeled her over with her lee deck underwater. They then set the spritsail (on the bowsprit) to lever her around before the wind-but this blew away. Finally, they got her to bear up (we would say, bear off) before the wind, by the hard expedient ofcutting away the mainmast, so greatly reducing windage. And so, wallowing in the sea and pumping for their lives, they came to the Isle of Wight where they made repairs, and finally to London. One shares the relief with which he 46

wrote in great letters, "Here ended this voyage." How sweet and solid the land must have seemed after the near panic of exploring the dark hold up to one's armpits in water, and all the battering the autumn sea had given them. The third day of the ninth month ,' 1662 , we sailed for England , and had a fair wind . The 11th instant it proved a storm . It continued so violent that we lay without sail in the sea , driving . T he 12th , about 4 in the morning, we having not seen no land from the time we came out of Portugal, being now, as we reckoned, in the Channel between England and France, still driving wi thout sail, and the sea like mountains, I went to the master and told him I feared we might be near the coast of France, by Guernsey or Jersey, where near lay the Race of Alderney, a dangerous place, and that it would be convenient to get the ship about , and let her lay w ith her head towards the coast of England . The master thought well so to do ; upo n which I with some of the seamen went forward by the foresai l, the yard being lowered close down , and made fas t one yardarm of the sail well fast wi th ropes lest , whilst we loosed the other part of the sail to flat her about ,2 the whole sail should through the viole nce of the wind blow away. We having loosed th e lee sail, the yard a-portlands,3 put the helm a-weather, to bear up before the wind. The strength of the wind , with the seas like mountains, pressed the lee side of the ship under water, that through the weight of the water o n the deck to leeward , and the wind and sea pressing her down that the ship lay on her side like a log in the sea, and could not bear up, but lay alo ng as sinking, insomuch that the men did lament their conditio ns a nd for their poor wives and children , for we discerned nothing but death before our eyes. We loosed the spirit-sail, thinking thereby to make the ship bear up before the wi nd . The spi rit-sail was no sooner loose but the wind blew the sail all to pieces, and (it) flew into the sea . We being now in despair, looking o n every sea to have its commission with it to swallow us up, we in this conditio n looked o n (one) another with so rrowful hearts, holding fast lest we might be was hed overaboa rd . In this j uncture of time the Lord put it into my heart , being on the forepart of the ship, to get aft to the master alo ng the weather side of the ship. Bei ng got to him , I told him we must not lay so if we could help it. He told me he knew not what to do. I told him of cutting our mainmast overaboard. With that o ne of the I. Months are counted from March. 2 . Turn her head from the wind . 3. As far as it would go.

"Looking on every sea to ... swallow us up" seamen standing by clasped me in his arms, as overj oyed, as to say " Is there hopes yet?" We forthwith went to work and c ut away the mainmast , with sails, yards a nd all belonging to it; but before we could get it clear of the ship, the sea , heaving the ship with so much force against the mast a nd yards that we feared it would a run through the bottom of the ship ; but Providence prevented it , so that we got quit of it. Then our ship bore up befo re the sea. One of our men then got down in the hold by the pumps , fo r the hold itself was full of goods, seeing the water was in (the) hold that he was up to the arm-pokes. This was heart-breaking news again, looking the n fo r the ship to forsake us every mome nt and sink to the bottom . At this report the master got down in the hold in the well to see, a nd being so affrighted, as he told me afterward, that fearing the ship would sink before he got up again , that he could hardly find the scuttle where he went down . We kept pumping for our lives, also kept the ship right before the great sea with all the care we could , lest it should fall o n our side and sink us quite. We had now little to do but to steer right before the sea a nd pump. At this time I took a piece of chalk in my hand and went down in the well, a nd by the edge of the water in the hold I made a score, a nd then came up again to the pumps, which were out of order very much . After some little time I went into the hold aga in to see whether the score of the chalk were above the water, so as that (if) we gained with pumping the n life, Jif under then death ; but I found the waterr to be below the water (mark) about a n incch. So then I had hopes, if our pumps deceiived us not. With this news I encouraged o ur men to pump. ~SEA