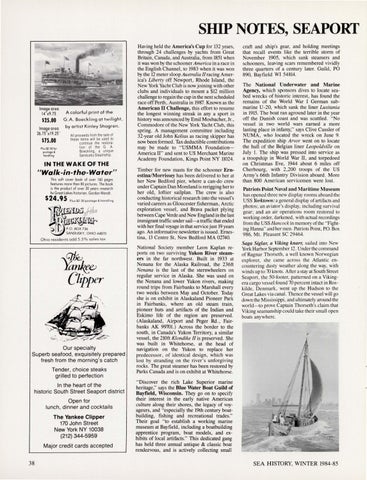 A colorful print of the

G .A . Boeckling at twilight ,

All proceeds from the sale of these items will be used to continue the restoration of the G. A. Boeckling . a unique Sandusky Steamship.

Having held the America&#39;s Cup for 132 years, through 24 challenges by yachts from Great Britain, Canada, and Australia, from 1851 when it was won by the schooner America in a race in the English Channel , to 1983 when it was won by the 12 meter sloop Australia l/ racing America&#39;s Liberty off Newport, Rhode Island , the New York Yacht Club is now joining with other clubs and individuals to mount a $12 million challenge to regain the cup in the next scheduled race off Perth , Australia in 1987. Known as the American II Challenge, this effort to resume the longest winning streak in any a sport in history was announced by Emil Mosbacher, Jr., Commodore of the New York Yacht Club, this spring. A management committee including 32-year old John Kolius as racing skipper has now been formed . Tax deductible contributions may be made to &quot;USMMA FoundationAmerica II&quot; and sent to US Merchant Marine Academy Foundation, Kings Point NY 11024.

IN THE WAKE OF THE

Timber for new masts for the schooner Ernestina/Morrissey has been delivered to her at her New Bedford pier, where a can-do crew under Captain Dan Moreland is rerigging her to her old , loftier sailplan. The crew is also conducting historical research into the vessel&#39;s varied careers as Gloucester fisherman , Arctic exploration vessel , and Brava packet plying between Cape Verde and New England in the last immigrant traffic under sail-a traffic that ended with her final voyage in that service just 19 years ago. An informative newsletter is issued. Ernestina , 13 Centre St, New Bedford MA 02740. National Society member Leon Kaplan reports on two surviving Yukon River steamers in the far northwest. Built in 1933 at Nenana for the Alaska Railroad, the 236ft Nenana is the last of the sternwheelers on regular service in Alaska . She was used on the Nenana and lower Yukon rivers , making round trips from Fairbanks to Marshall every two weeks between May and October. Today she is on exhibit in Alaskaland Pioneer Park in Fairbanks, where an old steam train , pioneer huts and artifacts of the Indian and Eskimo life of the region are preserved. (Alaskaland , Ail]JOrt and Peger Rd ., Fairbanks AK 99701. ) Across the border to the south , in Canada&#39;s Yukon Territory, a similar vessel, the 210ft Klondike ll is preserved. She was built in Whitehorse, at the head of navigation on the Yukon to replace her predecessor, of identical design , which was lost by stranding on the river &#39;s unforgiving rocks. The great steamer has been restored by Parks Canada and is on exhibit at Whitehorse.

craft and ship&#39;s gear, and holding meetings that recall events like the terrible storm of November 1905, which sank steamers and schooners, leaving scars remembered vividly three quarters of a century later. Guild , PO 890, Bayfield WI 54814. The National Underwater and Marine Agency, which sponsors dives to locate seabed wrecks of historic interest, has fou nd the remains of the World War I German submarine U-20, which sank the liner Lusitania in 1915. The boat ran aground later in the year off the Danish coast and was scuttled . &quot;No vessel in two world wars earned a more lasting place in infamy,&#39;&#39; says Clive Cussler of NUMA , who located the wreck on June 9. The expedition ship Arvor went on to locate the hull of the Belgian liner Leopoldville on July I. The ship was pressed into service as a troopship in World War II, and torpedoed on Christmas Eve, 1944 about 6 miles off Cherbourg, with 2,200 troops of the US Army&#39;s 66th Infantry Division aboard . More than 800 American servicemen were lost. Patriots Point Naval and Maritime Museum has opened three new di splay rooms aboard the USS Yorktown: a general display of artifacts and photos ; an aviator&#39;s display, including survival gear; and an air operations room restored to working order, darkened , with actual recordings from the USS Han cock in memory of the &quot; Fighting Hanna&quot; and her men. Patriots Point, P.O. Box 986, Mt. Pleasant SC 29464. Saga Siglar, a Viking k11arr, sai led into New York Harbor September 12 . Under the command of Ragnar Thorseth , a well known Norwegian explorer, she came across the Atlantic encountering dusty weather along the way, with winds up to 70 knots. After a stay at South Street Seaport, the 50-footer, patterned on a Vikingera ca rgo vessel found 70 percent intact in Roskilde, Denmark , went up the Hudson to the Great Lakes via canal. Thence the vessel wi ll go down the Mississippi , and ul timately around the wo rld-to prove Captain Thorseth&#39;s claim that Viking seamanship could take thei r small open boats anywhere.

&quot; Discover the rich Lake Superior marine heritage,&quot; says the Blue Water Boat Guild of Bayfield, Wisconsin. They go on to specify their interest in the early native American culture along their shores, the legacy of voyageu rs, and &quot;especially the 19th century boatbuilding, fishing and recreational trades.&quot; Their goal &quot;to establish a working marine museum at Bayfield , including a boatbuilding apprentice program, boat models , and exhibits of local artifacts.&quot; This dedicated gang has held three annual antique &amp; classic boat rendezvous, and is actively collecting small