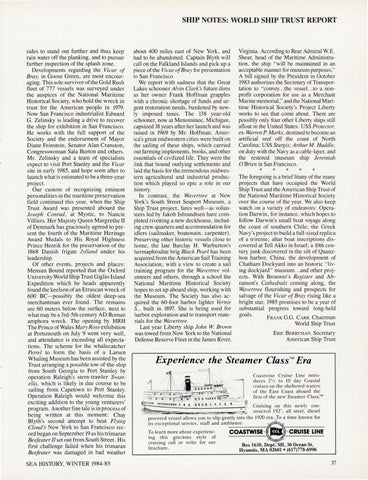 sides to stand out further and thus keep rain water off the planking, and to pursue further inspection of the splash zone. Developments regarding the Vicar of Bray, in Goose Green, are most encouraging . This sole survivor of the Gold Rush fleet of 777 vessels was surveyed under the auspices of the National Maritime Historical Society, who hold the wreck in trust for the American people in 1979. Now San Francisco industrialist Edward G. Zelinsky is leading a drive to recover the ship for exhibition in San Francisco. He works with the full support of the Society and the endorsement of Mayor Diane Feinstein , Senator Alan Cranston, Congresswoman Sala Burton and others . Mr. Zelinsky and a team of specialists expect to visit Port Stanley and the Vicar site in early 1985, and hope soon after to launch what is estimated to be a three-year project. Our custom of recognizing eminent personalities in the maritime preservation field continued this year, when the Ship Trust Award was presented aboard the Joseph Conrad, at Mystic, to Nancie Villiers. Her Majesty Queen Margrethe II of Denmark has graciously agreed to present the fo urth of the Maritime Heritage Award Medals to His Royal Highness Prince Henrik for the preservation of the 1868 Danish fr igate Jylland under his leadership. Of other events, projects and places: Mensun Bound reported that the Oxford University-World Ship Trust Giglio Island Expedition which he heads apparently found the keel son of an Etruscan wreck of 600 BC-possibly the oldest deep-sea merchantman ever found. The remains are 60 meters below the surface, next to what may be a 3rd-5th century AD Roman amphora wreck. The opening by HRH The Prince of Wales Mary Rose exhibition at Portsmouth on July 9 went very well , and attendance is exceeding all expectations. The scheme for the whalecatcher Petrel to form the basis of a Larsen Whaling Museum has been assisted by the Trust arranging a possible tow of the ship from South Georgia to Port Stanley by operation Raleigh&#39;s stern-trawler Swanella, which is likely in due course to be sailing from Capetown to Port Stanley. Operation Raleigh would welcome this exciting add ition to the young venturers&#39; program . Another fine tale is in process of being written at this moment : Chay Blyth&#39;s second attempt to beat Flying Cloud&#39;s New York to San Francisco record began on September 19 as his trimaran Beefeater II set out from South Street. His first challenge failed when his trimaran Beefeater was damaged in bad weather SEA HISTORY, WINTER 1984-85

about 400 miles east of New York , and had to be abandoned . Captain Blyth will call on the Falkland Islands and pick up a piece of the Vicar of Bray for presentation to San Francisco. We report with sadness that the Great Lakes schooner Alvin Clark&#39;s future dims as her owner Frank Hoffman grapples with a chronic shortage of funds and urgent restoration needs , burdened by newly imposed taxes . The 138 year-old schooner, now at Menominee, Michigan , capsized 18 years after her launch and was raised in 1969 by Mr. Hoffman . America&#39;s great mid western cities were built on the sailing of these ships, which carried out farming implements, books, and other essentials of civilized life. They were the link that bound outlying settlements and laid the basis for the tremendous mid western agricultural and industrial production which played so epic a ro le in our history. In contrast, the Wavertree at New York&#39;s South Street Seaport Museum , a Ship Trust project, fares well-as volunteers led by Jakob lsbrandtsen have completed rivetting a new deckhouse, including crew quarters and accommodation for idlers (sailmaker, boatswain , carpenter). Preserving other historic vessels close to home, the late Barclay H. Warburton&#39;s hermaphrodite brig Black Pearl has been acquired from the American Sail Training Association, with a view to create a sail training program for the Wavertree volunteers and others, through a school the National Maritime Historical Society hopes to set up aboard ship, working with the Museum . The Society has also acquired the 60-foot harbor lighter ~rnie S. , built in 1897. She is being used for harbor exploration and to transport materials for the Wavertree. Last year Liberty ship John W Brown was towed from New York to the National Defense Reserve Fleet in the James River,

Virginia. According to Rear Admiral W. E . Shear, head of the Maritime Administration , the ship &quot; will be maintained in an acceptable manner for museum purposes.&quot; A bill signed by the President in October 1983 authorizes the Secretary of Transportation to &quot;convey... the vessel. .. to a nonprofit corporation for use as a Merchant Marine memorial ,&quot; and the National Maritime Historical Society&#39;s Project Liberty works to see that come about. There are possibly only four other Liberty ships still afloat in the United States: USS Protector, ex-Warren P Marks , destined to become an artificial reef off the coast of North Carolina; USS Sturgis; Arthur M. Huddle, on duty with the Navy as a cable-layer, and the restored museum ship Jeremiah O&#39;Brien in San Francisco.

The foregoing is a brief 1itany of the many projects that have occupied the World Ship Trust and the American Ship Trust of the National Maritime Historical Society over the course of the year. We also keep watch on a variety of endeavors : Operation Darwin , for instance, which hopes to follow Darwin&#39;s small boat voyage along the coast of southern Chile; the Greek Navy&#39;s project to build a full-sized replica of a trireme ; altar boat inscriptions discovered at Tell Akko in Israel; a 10th century junk discovered in the silt of Quanzhou harbor, China ; the development of Chatham Dockyard into an historic &quot; living dockyard&quot; museum ... and other proj ects. With Brouwer&#39;s Register and Abranson&#39;s Cathedrals coming along, the Wavertree flourishing and prospects for salvage of the Vicar of Bray rising like a bright star, 1985 promises to be a year of substantial progress toward long-held goals. FRANK G.G. CARR, Chairman World Ship Trust ERJC BERRYMAN, Secretary American Ship Trust

To learn more about experien cing this gra cious style of cru ising call or write for our brochure.