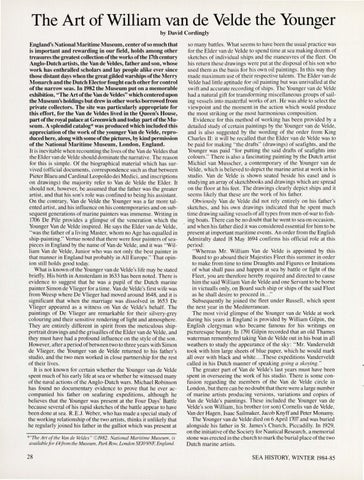 The Art of William van de Velde the Younger by David Cordingly England&#39;s National Maritime Museum, center of so much that is important and rewarding in our field , holds among other treasures the greatest collection of the works of the 17th century Anglo-Dutch artists, the Van de Veldes, father and son, whose work has enthralled scholars and lay people alike ever since those distant days when the great gilded warships of the Merry Monarch and the Dutch Elector fought each other for control of the narrow seas. In 1982 the Museum put on a memorable exhibition, &quot;The Art of the Van de Veldes&quot; which centered upon the Museum&#39;s holdings but drew in other works borrowed from private collectors. The site was particularly appropriate for this effort, for the Van de Veldes lived in the Queen&#39;s House, part of the royal palace at Greenwich and today part of the Museum. A splendid catalog* was produced which included this appreciation of the work of the younger Van de Velde, reproduced here, along with some of the pictures, by kind permission of the National Maritime Museum, London , England. It is inevitabl e when reco unting the li ves of the Yan de Yeldes that the Elder va n de Ye Ide should dominate the narrati ve. The reason for this is si mple . Of the biographical material which has survived (official documents ,&quot; correspondence such as that between Pieter Blaeu and Cardinal Leopo ldo dei Medici , and inscriptions on drawings) the majo rity refer to Yan de Yelde the Elder. It should not , however, be ass umed that th e fa ther was the greater artist , and th at his son&#39;s role was confined to bei ng his ass istant . On the contrary, Yan de Yelde the Younger was a far more ta lented artist , and his influence on his contemporaries and on subsequent generati ons of marine painters was immense. Writing in 1706 De Pile provides a glimpse of the veneration which th e Younger Yan de Yelde inspired. He says the Elder va n de Yelde, &quot; was the fa th er of a li ving Master, whom no Age has eq ualled in ship-painting .&quot; Yertue noted that there were fo ur painters of seapieces in England by the name of Yan de Yelde, and it was &quot; William Van de Yelde, Junior who was not onl y the best painter in that manner in England but probab ly in All Europe.&quot; That opi nion still holds good today. What is known of the Younger van de Yelde&#39;s life may be stated briefl y. His birth in Amsterdam in 1633 has been noted . There is evidence to suggest that he was a pupil of the Dutch marine painter Simon de Ylieger for a time. Van de Yelde&#39;s first wife was from Weesp where De Vlieger had moved around 1648, and it is significant that when the marri age was dissolved in 1653 De Ylieger appeared as a w itness on Yan de Yelde&#39;s behalf. The paintings of De Ylieger are remarkable fo r their silvery-g rey colouring and their sensitive rendering of light and atmosphere . They are entirely different in spirit from the meticulous shipportraitdrawings and the grisai lles of the Elder van de Velde, and they must have had a profound influence on the sty le of th e son. However, after a period of between two to three yea rs with Simon de Ylieger, the Younger van de Yelde returned to his father&#39;s studio, and the two men wo rked in close partnership for the rest of their lives. It is not known fo r certa in whether the Younger van de Yelde spent much of his early life at sea or whether he w itnessed many of th e nava l actions of the Anglo-Dutch wars. Michael Robinson has found no documentary evidence to prove that he ever accompanied his father on seafari ng expeditions, although he believes that the Younger was present at the Four Days&#39; Battl e because several of his rapid sketches of the battle appear to have been done at sea. R .E.J. Weber, who has made a special study of the working relationship of the two artists, thinks it unlikely that he regularly joined his fat her in the galliot which was present at *&quot;771 e Art of the 1-iln de Ve/des &quot; ÂŠ 1982. National Maritim e Museum, is availableforÂŁ4from the Museum , Park Row, London SEI09NF, England.

so many battles. What seems to have been th e usual practice was fo r the Elder va n de Yelde to spend time at sea maki ng dozens of sketches of individual s hips and the maneuvres of th e fl eet. On his return these d raw ings we re put at the disposal of his son who used them as the basis fo r h is own oil paintings. In this way they made max imum use of their respecti ve talents. The Elder van de Yelde had little aptitude for oil painting but was unrivalled at the swift and accurate recording of ships. The Younger van de Velde had a natural gift for transforming miscellaneo us gro ups of sail ing vessels into masterful works of art . He was able to select the viewpoint and the momenliin the action which would produce the most striking or th e most harmonious composition. Evidence fo r this method of working has been provided by a detailed stud y of certain paintings by the Younger van de Yelde, and is also suggested by the wording of the order from King Charles II: it will be reca lled that the Elder va n de Yelde was to be paid for making &quot; the drafts&quot; (drawings) of seafights, and the Younger was paid &quot; for putting the sa id drafts of seafi ghts into colours.&quot; There is also a fasc inating painting by the Dutch artist Michie) va n Musscher, a contemporary of th e Younge r va n de Yelde, which is believed to depict the mari ne artist at work in his studio. Yan de Yelde is shown seated beside his easel and is studying an array of sketchbooks and drawings which are spread on the fl oor at his feet. The drawings clearly depict ships and it seems likely th at these are the work of hi s fat her. Obviously Yan de Velde did not rely entirely on his fa ther&#39;s sketches , and his own drawings indicated th at he spent much time drawing sailing vessels of all types from men-of-war to fishing boats. There can be no doubt that he went to sea on occasion , Âˇ and when hi s father died it was considered essential for him to be present at impo rtant ma ritime events. An order from the English Admiralty dated 18 May 1694 confirms his official role at this period: &quot;Whereas Mr. William Yan de Yelde is appointed by this Board to go aboard their Majesties Fleet this summer in order to make from time to time Draughts and Figures or Imitat ions of what shall pass and happen at sea by battle or fight of the Fleet, yo u are therefore hereby required and directed to cause him the said William Van de Velde and one Servant to be borne in victualls onl y, on Board such ship or ships of the said Fleet as he shall desire to proceed in ...&quot; Subsequently he joined the fl eet under Russell , which spent the next yea r in the Med iterranean. The most viv id gli mpse of the Younger va n de Yelde at work during his yea rs in England is provided by William Gilpin , the English clergyman who became famous fo r his writings on picturesque beauty. In 1791 Gilpin recorded that an old Thames waterman remembered taking Yan de Yelde out in his boat in all weathers to study the appearance of the sky: &quot; Mr. Yanderveldt took wi th him large sheets of blue paper, which he would mark all over with black and white ... .These ex peditions Vanderveldt called in his Dutch man ner of speaking going a skoying.&quot; The greater part of Van de Yelde&#39;s last yea rs must have been spent in overseeing the work of his studio. There is some confusi on regarding the members of the Yan de Yelde circle in London , but there can be no doubt that there were a large number of marine a rtists produc ing vers ions, variations and co pies of Yan de Yelde&#39;s paintings. These included the Younger van de Yelde&#39;s son William , his brother (o r son) Cornelis van de Yelde, Yan der Hagen, Isaac Sail maker, Jacob Knyff and Peter Monamy. The Younger van de Velde di ed on 6 April 17(17 and was buried alongside his father in St. James&#39;s Church, Piccadilly. In 1929, on th e initiati ve of the Society fo r Nautical Research , a memori al stone was erected in the church to mark the burial pl ace of the two Dutch marine artists. SEA HISTORY, WINTER 1984-85