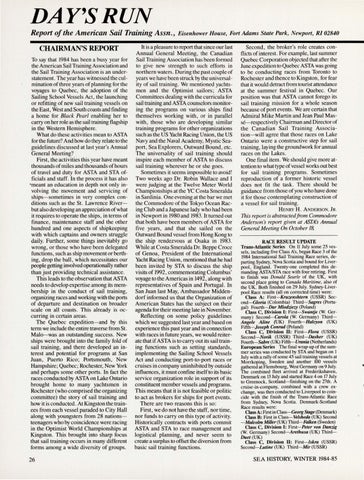 DAY&#39;S RUN Report of the American Sail Training Assn., Eisenhower House, Fort Adams State Park, Newport, RI 02840 CHAIRMAN&#39;S REPORT To say that 1984 has been a busy year for the American Sail Training Association and the Sail Training Association is an understatement. The year has witnessed the culmination of three years of planning for the voyages to Quebec, the adoption of the Sailing School Vessels Act, the launching or refitting of new sail training vessels on the East, West and South coasts and finding a home for Black Pearl enabling her to carry on her role as the sail training flagship in the Western Hemisphere. What do these activities mean to ASTA for the future? And how do they relate to the guidelines discussed at last year&#39;s Annual General Meeting? First, the activities this year have meant thousands of miles and thousands of hours of travel and duty for ASTA and STA officials and staff. In the process it has also Âˇmeant an education in depth not only involving the movement and servicing of ships-sometimes in very complex conditions such as the St. Lawrence Riverbut also developing an appreciation of what it requires to operate the ships, in terms of finance , maintenance staff and the other hundred and one aspects of shipkeeping with which captains and owners struggle daily. Further, some things inevitably go wrong, or those who have been delegated functions , such as ship movement or berthing, drop the ball , which necessitates our people getting involved operationally rather than just providing technical assistance. This leads to the observation that ASTA needs to develop expertise among its membership in the conduct of sail training, organizing races and working with the ports of departure and destination on broader scale on all coasts. This already is occurring in certain areas . The Quebec expedition-and by this term we include the entire traverse from St. Malo-was an outstanding success. New ships were brought into the family fold of sail training, and there developed an interest and potential for programs at San Juan , Puerto Rico ; Portsmouth , New Hampshire; Quebec; Rochester, New York and perhaps some other ports. In fact the races conducted by ASTA on Lake Ontario brought home to many yachtsmen in Rochester (who comprised the organizing committee) the story of sail tra1ning and how it is conducted. At Kingston the trainees from each vessel paraded to City Hall along with youngsters from 28 nationsteenagers who by coincidence were racing in the Optimist World Championships at Kingston . This brought into sharp focus that sail training occurs in many different forms among a wide diversity of groups.

It is a pleasure to report that since our last Annual General Meeting, the Canadian Sail Training Association has been formed to give new strength to such efforts in northern waters. During the past couple of years we have been struck by the universality of sail training. We mentioned yachtsmen and the Optimist sailors; ASTA Committees dealing with the curricula for sail training and ASTA counselors monitoring the programs on various ships find themselves working with , or in parallel with, those who are developing similar training programs for other organizations such as the US Yacht Racing Union , the US Navy and the Naval Academy, Mystic Seaport, Sea Explorers, Outward Bound , etc. The universality of sail training should inspire each member of ASTA to discuss sail training wherever he or she goes. Sometimes it seems impossible to avoid! Two weeks ago Dr. Robin Wallace and I were judging at the Twelve Meter World Championships at the YC Costa Smeralda in Sardinia. One evening at the bar we met the Commodore of the Tokyo Ocean Racing Club and a Japanese lady who had been in Newport in 1980 and 1983. It turned out that both have been members of ASTA for five years, and that she sailed on the Outward Bound vessel from Hong Kong to the ship rendezvous at Osaka in 1983. While at Costa Smeralda Dr. Beppe Croce of Genoa , President of the International Yacht Racing Union , mentioned that he had been invited by STA to discuss the ship visits of 1992, commemorating Columbus&#39; voyage to the Americas in 1492 , along with representatives of Spain and Portugal. In San Juan last May, Ambassador Middendorf informed us that the Organization of American States has the subject on their agenda for their meeting late in November. Reflecting on some policy guidelines which we suggested last year and based on experience this past year and in connection with races in future years, we would reiterate that if ASTA is to carry out its sail training functions such as setting standards, implementing the Sailing School Vessels Act and conducting port-to-port races or cruises in company uninhibited by outside influences, it must confine itself to its basic service organization role in support of its constituent member vessels and programs. This means that it is not feasible or politic to act as brokers for ships for port events. There are two reasons this is so: First, we do not have the staff, nor time, nor funds to carry on this type of activity. Historically contracts with ports commit ASTA and STA to race management and logistical planning, and never seem to create a surplus to offset the diversion from basic sail training functions.

Second, the broker&#39;s role creates conflicts of interest. For example, last summer Quebec Corporation objected that after the June expedition to Quebec ASTA was going to be conducting races from Toronto to Rochester and thence to Kingston, for fear that it would detract from tourist attendance at the summer festival in Quebec. Our position was that ASTA cannot forego its sail training mission for a whole season because of port events. We are certain that Admiral Mike Martin and Jean Paul Masse-respectively Chairman and Director of the Canadian Sail Training Association-will agree that those races on Lake Ontario were a constructive step for sail training, laying the groundwork for annual races on the Lakes. One final item . We should give more attention to what type of vessel works out best for sail training programs . Sometimes reproduction of a former historic vessel does not fit the task. There should be guidance from those of you who have done it for those contemplating construction of a vessel for sail training. H ENRY H . ANDERSON , JR .