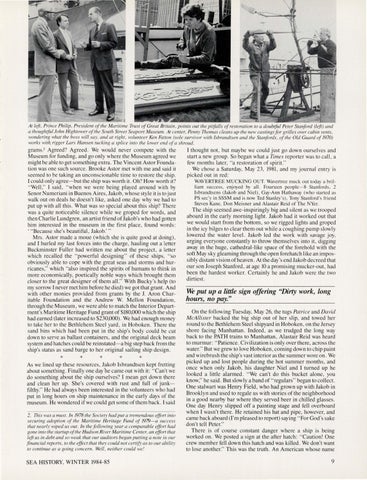 At left, Prince Ph ilip , President of the Ma ritime Trust of Great Britain, points ow th e pitfalls of restoration to a doubtful Peter Stanford (left) and a thoughtful John Hightower of the Sowh Stree1 Seaport Museum. At center, Penny Th omas cleans up the new castings for grilles over cabin vents, wondering what the boss will say, and at right , volunteer Ken Fatton (so le survivor with lsbrand1sen and the Stanfords , of 1he Old Guard of 1970) works with. rigger Lars Hansen tucking a splice into the lower end of a shroud.

grams.2 Agreed? Agreed . We wo uld never compete with th e Museum fo r fundin g, and go onl y where the Museum agreed we might be abl e to get something extra. The Vincent Astor Foundati on was one such source. Broo ke Astor met with me and said it seemed to be tak ing an un consc ionable time to restore the ship. I could onl y ag ree-but the ship was wo rth it. Oh? How wo rth it? " Well ," I said , " when we were being pl ayed aro und with by Senor Numeri ani in Buenos Aires, Jakob, whose style it is to j ust walk out on deals he doesn't li ke, as ked one day why we had to put up with all this. What was so spec ial about thi s ship? There was a quite noti ceable silence while we groped fo r wo rds, and then Charlie Lundgren , an artist fri end of Jakob's who had gotten him interested in the museum in the first pl ace, found wo rds: '" Because she's beautiful , Jakob.'" Mrs. Astor made a moue (which she is quite good at doing) , and I hurled my last forces into the charge, haul ing out a letter Buckminster Fuller had wr itten me about the project , a letter which recalled the " powerful des igning" of these ships, "so obviously able to cope w ith the great seas and storms and hurri canes," which "also inspired the spirits of humans to thin k in more economicall y, poeti call y noble ways which brought them closer to the g reat des igner of th em all." With Bucky's help (to my sorrow I never met him befo re he di ed) we got that grant. A nd with other monies provided fro m grants by the 1. Aron Charitable Found ati on and the Andrew W. Mellon Foundati on, through th e Museum , we we re able to match the Interior Department 's Maritime Heritage Fund grant of $180,000 which the ship had earned (later increased to $230,000) . We had enough money to take her to th e Bethl ehem Steel yard , in Hoboken. T here th e sand bins which had been put in the ship's body could be cut down to serve as ballast containers, and the orig inal deck beam system and hatches could be reinstated-a big step bac k from the ship's status as sand barge to her original sa iling ship des ign.

As we lined up these reso urces , Jakob Isbrandtsen kept fretting about something . Finall y one day h e came out with it: " Can't we do something about th e ship ourse lves? I mean get down the re and clean her up. She's covered with rust and full of junkfilthy." He had always been interested in the vo lunteers who had put in long hours on ship maintenance in th e ea rl y days of the museum. He wo ndered if we could get some of them back. I sa id 2. This was a must. In 1978 the Socie1y had put a tremendous effort i1110 securing adoption of 1he Maritime Heritage Fun d of 19'79- a success that nearly wiped us out. In the fol lowing year a comparable effort had gone into the startup ofthe Hudson Ri ver Mari time Center, an effort that left us in deb t and so weak that our auditors began putting a note in our fina ncial reports , to the effect that they could not certify as to our ability 10 continue as a going concern . Well , neither could we!

I thought not, but may be we could just go down ourselves and start a new group. So began what a Times reporter was to call , a few mo nt hs later, "a restoratio n of spirit." We chose a Saturday, May 23, 1981, and my journa l entry is picked out in red : WAVERT REE MUCK ING OU T. Wavertree muck out today a brilliant success, enjoyed by all . Fourteen people- 8 Stanfords, 2 Isbra ndtsens (Jakob and Nie l), Gay-A nn Hathaway (who started as PS sec'y in SSSM and is now Ted Stanl ey 's) , Tony Sta nford 's frie nd Steven Kane, Don Meisner and Alastair Reid of The NYer.

The ship seemed awe-i nspiringly big and silent as we trooped aboard in the early mo rn ing light. Jakob had it worked out that we would start from the bottom , so we ri gged lights and groped in the icy bi lges to clear th em out while a coughing pump slow ly lowe red the water level. Jakob led th e wo rk with savage joy, urging everyo ne constantl y to th row themselves into it , diggi ng away in th e huge, cathedral-li ke space of the fo rehold with the soft May sky gleaming th rough the open fo rehatch li ke an impossibl y distant vision of heaven. At the day 's end Ja kob decreed th at our son Joseph Stanfo rd , at age IO a promi sing mucker-out , had been the ha rdest wo rker. Certainl y he and Ja kob we re the two d irtiest.

We put up a little sign offering "Dirty work, long hours, no pay." On th e fo llow ing Tuesday, May 26, the tugs Patrice and David McAllister backed the big ship out of her slip, and towed her round to th e Bethlehem Steel shipya rd in Hoboken, on the Je rsey shore fac ing Manhatta n. Indeed , as we trudged the long way back to th e PATH tra ins to Manhattan, Alasta ir Reid was heard to murmur : " Patience. C ivilization is onl y over th ere, ac ross th e water." But we grew to love Hoboken, coming down to chip pa int and wireb rush the ship's vast interio r as the summer wore on. We picked up and lost people during the hot summer months, and once when onl y Jakob, his daughter iel and I turned up he looked a little alarmed. " We can't do this bucket alone, yo u know," he sa id . But slowly a band of " reg ul ars" began to collect. One stalwa rt was Henry Field , who had g rown up with Jakob in Brookly n and used to regale us with stori es of the neighbo rhood in a good nearby bar where they served beer in chilled glasses . One day Hen ry slipped off a pai nting stage and fe ll overboard when I was n't there. He retained his hat and pipe, however, and came bac k aboard (I'm pleased to report) say ing " Fo r God's sake don't tell Peter." The re is of course constant dange r whe re a ship is being wo rked on. We posted a sign at the afte r hatch: " Caution! One crew member fe ll down th is hatch and was killed . We don't wa nt to lose another." This was the truth . An Ameri can whose name 9