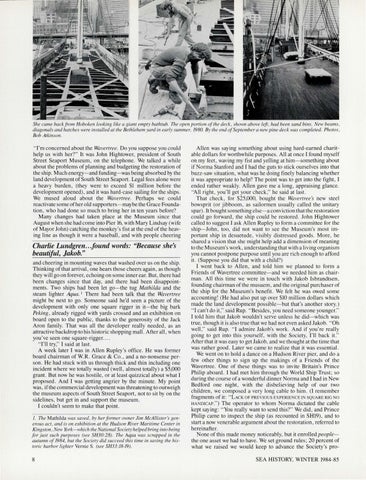 She came back from Hoboken looking like a giant emply bmh1ub. Th e open pon ion of 1he deck , shown above left, had been sand bins. New beams, diagonals and ha1ches were inswlled ar rhe Be1hlehem ya rd in early summer, 1980. By The end of Seplember a new pine deck was comple!ed. Phoros, Bob Alkinson.

&#39;T m concern ed about the Wavertree. Do you suppose you co uld help us with her?&quot; It was John Hightower, pres ident of South Street Seaport Museum , on the telephone. We talked a whil e about the problems of planning and budgeting the restorati on of the ship. Much energy-and funding- was being abso rbed by the land development of South Street Seaport. Legal fees alone we re a heavy burden, (they were to exceed $1 million befo re th e development opened) , and it was hard-case sailing fo r the ships. We mused aloud about the Wavertree. Perh aps we could reacti vate some of her old supporters-may be the Grace Found ation, who had done so much to bring her in ten yea rs before? Many changes had taken place at the Museum since that August when she had come into Pier 16, with Mary Lindsay (w ife of Mayo r John) catching the monkey&#39;s fi st at the end of th e heaving line as though it were a baseball , and with people cheering

Charlie Lundgren .. .found words: &quot;Because she&#39;s beautiful, Jalwb.&quot; and cheering in mounting waves that washed over us on the ship. Thinking of that arrival , one hears those cheers aga in , as though th ey will go on fo rever, echo ing on some inner ear. But , there had been changes since that day, and there had been disappointments. Two ships had been let go-th e tug Mathilda and the steam lighte r Aqua. 1 There had been talk that the Wave rtree might be next to go. Someone said he&#39;d seen a picture of the development with only one square rigger in it- the big bark Peking, already rigged with ya rds crossed and an exhibition on board open to the public, thanks to the generosity of the Jack Aro n fa mily. That was all the developer really needed , as an attractive backdrop to his historic shopping mall. After all , when you&#39;ve seen one square-rigger.... &#39; &#39;I&#39;ll try,&quot; I said at last. A week later I was in Allen Rupl ey&#39;s offic e. He was form er board chairman of W.R. Grace &amp; Co., and a no-nonsense person. He had stuck with us through thick and thin including one incident where we totally wasted (well , almost totall y) a $5,000 gra nt . But now he was hostile, or at least quizzical about what I proposed . And I was getting angrier by the minute. My po int was, if the commercial development was threatening to outweigh the museum as pects of South Street Seaport , not to sit by on the sidelines, but get in and support the museum . I co uldn&#39;t seem to make that point. I. Th e Mathilda was saved, by her fo rmer owner Jim fl1cA llis1er&#39;s generous acr, and is on exhibi1ion al 1he Hudson Ri ver Ma rilime Cen1er in Kings1on, New York-which 1he Na rional Socieryhelp ed bring into being for jus1 such p urposes (see SH30:28). The Aqua was scrapped in rhe auru.mn of 1984, bur 1he Socie1y did succeed rhis lime in saving rhe hisloric harbor ligh1er Ve rnie S. (see SH33:18-19) .

Allen was saying something about using hard-earned charitable dollars for worthwhile purposes. All at once I found myself on my feet , wav ing my fi st and yelling at him-something about if No rma Stanfo rd and I had the guts to stick ourselves into that buzz-saw situation, what was he do ing fin ely balancing wheth er it was app ropriate to help? T he point was to get into the fi ght , I ended rather weakl y. Allen gave me a lo ng, appraising glance. &quot;All ri ght , yo u&#39; ll get your check,&quot; he sa id at last. That check , fo r $25,000, bought the Wavertree&#39;s new steel bows prit (o r j ibboom , as sailormen usuall y call ed the unitary spar). It bought something else-a conviction that the restoratio n could go fo rward , the ship could be resto red . John Hightower ca lled to suggest I as k Allen Rupl ey to fo rm a committee fo r th e ship- John , too, did not want to see the Museum&#39;s most important ship in des uetude, visib ly di stressed goods. More, he shared a vision th at she might help add a d imension of meaning to the Museum&#39;s wo rk , understanding th at with a living o rga nism you cann ot postpone purpose unti l yo u are ri ch enough to affo rd it . (S uppose yo u did th at with a child?) I we nt bac k to Allen , and told him we planned to fo rm a Friends of Wavertree committee- and we needed him as chairman. A ll this time we we re in touch with Jakob Isbrandtsen, fo unding chairman of the mu suem , and the original purchase r of the ship fo r the Museum&#39;s benefit. We felt he was owed some accounting ! (He had also put up ove r $10 million dollars which made the land development poss ible- but th at&#39;s anothe r sto ry.) &quot; I can&#39;t do it ,&quot; said Rup. &quot; Bes ides, yo u need someone younge r.&quot; I told him th at Jakob wouldn&#39;t serve unless he did- which was true, th ough it is also tru e that we had not even asked Jakob. &quot; Oh we ll ,&quot; said Rup. &quot; I admire Jakob&#39;s wo rk . And if yo u&#39; re reall y going to get into this yourself, w ith the Society, I&#39;ll bac k it .&quot; After th at it was easy to get Ja kob, and we thought at the time that was rath er good . Late r we came to realize th at it was essential. We went on to hold a dance on a Hudson Ri ve r pie r, and do a few oth er things to sign up the makings of a Friends of the Wavertree. One of these things was to invite Britain&#39;s Prince Ph ilip aboard . I had met him th rough th e World Ship Trust; so during the co urse of a wonderful dinner No rma and I had in New Bedford one night , with the disbelieving help of our two children , we composed a very long cable to him. (I remember frag ments of it: &quot; LACK OF PREV IOUS EX PERIENCE I SQUARE RIG NO HANDICAP .&quot;) The operator to whom No rma d ictated th e cable kept say ing: &quot; You reall y want to send this?&quot; We did , and Prince Philip came to inspect the ship (as recounted in SHl9), and to start a now venerable argument about the restoration, referred to hereinafter. None of this made money noticeably, but it enrolled peopleth e one asset we had to have. We set ground rul es; 20 percent of what we raised we would keep to advance th e Society&#39;s proSEA HISTORY, WI NTER 1984-85