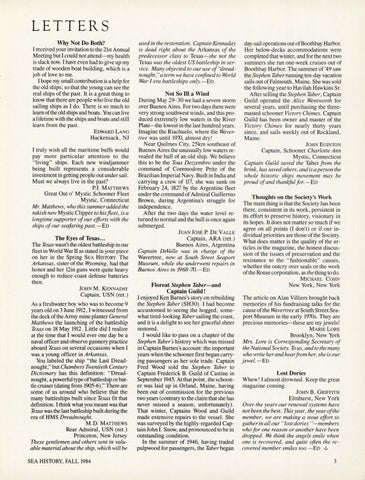 LETTERS Why Not Do Both? I received your invitation to the 21st Annual Meeting but I could not attend-my health is slack now. I have even had to give up my trade of wooden boat building, which is a job of love to me. I hope my small contribution is a help for the old ships ; so that the young can see the real ships of the past. It is a great thing to know that there are people who live the old sailing ships as I do. There is so much to learn of the old ships and boats. You can live a lifetime with the ships and boats and still learn from the past. EDWARD LANG Hackensack, NJ I truly wish all the maritime buffs would pay more particular attention to the . &quot;living&quot; ships. Each new windjammer Âˇ being built represents a considerable investment in getting people out under sail . Must we always live in the past? P.J. MATTHEWS Great Out o&#39; Mystic Schooner Fleet Mystic, Connecticut Mr. Matthews, who this summer added the rakish new Mystic Clipper to his fleet , is a longtime supponer of our efforts with the ships of our seafaring past. -ED

The Eyes of Texas ... The Texas wasn&#39;t the oldest battleship in our fleet in World War II as stated in your piece on her in the Spring SEA HISTORY. The Arkansas, sister of the ttyoming, had that honor and her 12in guns were quite heavy enough to reduce coast defense batteries then . JOHN M . KENNADAY Captain , USN (ret.) As a freshwater boy who was to become 9 years old on 3 June 1912, I witnessed from the deck of the Army mine planter General Matthews the launching of the battleship Texas on 18 May 1912. Little did I realize at the time that I would ever one day be a naval officer and observe gunnery practice aboard Texas on several occasions when I was a young officer in Arkansas. You labeled the ship &quot; the Last Dreadnought,&quot; but Chambers Twentieth Century Dictionary has this definition : &quot; Dreadnought, a powerful type of battleship or battle cruiser (dating from 1905-6) .&quot; There are some of us around who believe that the many battleships built since Texas fit that definition. I think what you meant was that Texas was the last battleship built during the era of HMS Dreadnought. M.D. MATTHEWS Rear Admiral, USN (ret.) Princeton , New Jersey These gentlemen and others sent in valuable material about the ship, which will be SEA HIS1DRY, FALL 1984

used in the restoration. Captain Kennaday is dead right about the Arkansas of the predecessor class to Texas-she not the Texas was the oldest US battleship in service. Many objected to our use of &quot;dreadnought,&quot; a term we have confined to World War I era battleships only. -ED .

Not So Ill a Wind During May 29-30 we had a severe storm over Buenos Aires. For two days there were very strong southwest winds, and this produced extremely low waters in the River Plate-the lowest in the last hundred years. Imagine the Riachuelo, where the Wavertree was until 1970, almost dry! Near Quilmes City, 25km southeast of Buenos Aires the unusually low waters revealed the hull of an old ship. We believe this to be the Tous Deu.embro under the command of Commodore Pritz of the Brazilian Imperial Navy. Built in India and carrying a crew of 117, she was sunk on February 24, 1827 by the Argentine fleet under the command of Admiral Guillermo Brown , during Argentina&#39;s struggle for independence. After the two days the water level returned to normal and the hull is once again submerged . J UAN JOSE P. DE VALLE Captain, ARA (ret.) Buenos Aires, Argentina Captain DeValle was in charge of the Wavertree, now at South Street Seaport Museum, while she underwent repairs in Buenos Aires in 1968-70.-ED

Floreat Stephen Taber-and Captain Guild! I enjoyed Ken Barnes&#39;s story on rebuilding the Stephen Taber (SH30). I had become accustomed to seeing the hogged , somewhat tired-looking Taber sailing the coast, and it is a delight to see her graceful sheer restored . I would like to pass on a chapter of the Stephen Taber&#39;s history which was missed in Captain Barnes&#39;s account: the important years when the schooner first began carrying passengers as her sole trade. Captain Fred Wood sold the Stephen Taber to Captain Frederick B. Guild of Castine in September 1945. At that point, the schooner was laid up in Orland , Maine, having been out of commission for the previous two years (contrary to the claim that she has never missed a season, unfortunately) . That winter, Captains Wood and Guild made extensive repairs to the vessel. She was surveyed by the highly-regarded Captain John I. Snow, and pronounced to be in outstanding condition. In the summer of 1946, having traded pulpwood for passengers, the Taber began

day-sail operations out of Boothbay Harbor. Her below-decks accommodations were completed that winter, and for the next two summers she ran one-week cruises out of Boothbay Harbor. The summer of &#39;49 saw the Stephen Taber running ten-day vacation sails out of Falmouth, Maine. She was sold the following year to Havilah Hawkins Sr. After selling the Stephen Taber, Captain Guild operated the Alice Wentworth for several years, until purchasing the threemasted schooner Victory Chimes. Captain Guild has been owner and master of the Victory Chimes for nearly thirty years since, and sails weekly out of Rockland , Maine. JOHN EGINTON Captain, Schooner Charlotte Ann Mystic, Connecticut Captain Guild saved the Taber from the brink, has saved others, and is a person the whole historic ships movement may be proud of and thankfulfor.-ED

Thoughts on the Society&#39;s Work The main thing is that the Society has been there, consistent in its work , persistent in its effort to preserve history, visionary in its hopes. It does not matter so much if we agree on all points (I don&#39;t) or if our individual priorities are those of the Society. What does matter is the quality of the articles in the magazine, the honest discussion of the issues of preservation and the resistance to the &quot;fashionable&quot; causes, whether the outcry over seals or the work of the Rouse corporation, as the thing to do. MICHAEL COHN New York, New York The article on Alan Villiers brought back memories of his fundraising talks for the cause of the Wavenree at South Street Seaport Museum in the early 1970s. They are precious memories-these are my jewels! MARIE LORE Brooklyn, New York Mrs. Lore is Corresponding Secretary of the National Society. To us, and to the many who write her and hear from her, she is our jewel.-ED

Lost Dories Whew! I almost drowned. Keep the great magazine coming. JOHN B. GRIFFITH Elmhurst, New York Over the years our renewal systems have not been the best. This year, the year ofthe member, we are making a stout effort to gather in all our &#39;&#39;lost dories&#39; &#39;-members who for one reason or another have been dropped. ~ think the angels smile when one is recovered, and quite often the recovered member smiles too. -ED .t 3