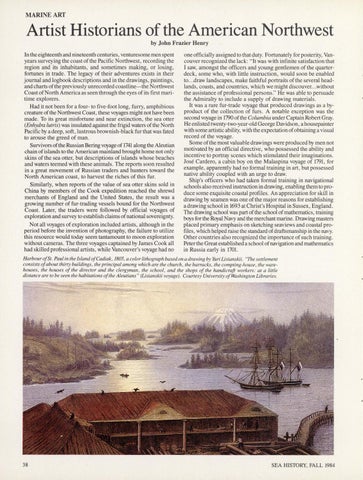 Artist Historians of the American Northwest by John Frazier Henry In the eighteenth and nineteenth centuries, venturesome men spent years surveying the coast of the Pacific Northwest, recording the region and its inhabitants, and sometimes making, or losing, fortunes in trade. The legacy of their adventures exists in their journal and logbook descriptions and in the drawings, paintings, and charts of the previously unrecorded coastline-the Northwest Coast of North America as seen through the eyes of its first maritime explorers. Had it not been for a four- to five-foot long, furry, amphibious creature of the Northwest Coast, these voyages might not have been made. To its great misfortune and near extinction, the sea otter (Enhydra lutris) was insulated against the frigid waters of the North Pacific by a deep, soft, lustrous brownish-black fur that was fated to arouse the greed of man. Survivors of the Russian Bering voyage of 1741 along the Aleutian chain of islands to the American mainland brought home not only skins of the sea otter, but descriptions of islands whose beaches and waters teemed with these animals. The reports soon resulted in a great movement of Russian traders and hunters toward the North American coast, to harvest the riches of this fur. Similarly, when reports of the value of sea otter skins sold in China by members of the Cook expedition reached the shrewd merchants of England and the United States, the result was a growing number of fur-trading vessels bound for the Northwest Coast. Later, the traders were followed by official voyages of exploration and survey to establish claims of national sovereignty. Not all voyages of exploration included artists, although in the period before the invention of photography, the failure to utilize this resource would today seem tantamount to moon exploration without cameras. The three voyages captained by James Cook all had skilled professional artists, while Vancouver's voyage had no

one officially assigned to that duty. Fortunately for posterity, Vancouver recognized the lack: "It was with infinite satisfaction that I saw, amongst the officers and young gentlemen of the quarterdeck, some who, with little instruction, would soon be enabled to ... draw landscapes, make faithful portraits of the several headlands, coasts, and countries, which we might discouver...without the assistance of professional persons." He was able to persuade the Admiralty to include a supply of drawing materials. It was a rare fur-trade voyage that produced drawings as a byproduct of the collection of furs. A notable exception was the second voyage in 1790 of the Columbia under Captain Robert Gray. He enlisted twenty-two-year-old George Davidson, a housepainter with some artistic ability, with the expectation of obtaining a visual record of the voyage. Some of the most valuable drawings were produced by men not motivated by an official directive, who possessed the ability and incentive to portray scenes which stimulated their imaginations. Jose Cardero, a cabin boy on the Malaspina voyage of 1791, for example, apparently had no formal training in art, but possessed native ability coupled with an urge to draw. Ship's officers who had taken formal training in navigational schools also received instruction in drawing, enabling them to produce some exquisite coastal profiles. An appreciation for skill in drawing by seamen was one of the major reasons for establishing a drawing school in 1693 at Christ's Hospital in Sussex, England. The drawing school was part of the school of mathematics, training boys for the Royal Navy and the merchant marine. Drawing masters placed primary emphasis on sketching seaviews and coastal profiles, which helped raise the standard of draftsmanship in the navy. Other countries also recognized the importance of such training. Peter the Great established a school of navigation and mathematics in Russia early in 1701.

Harbour ofSt. Paul in the Island ofCadiak , 1805, a color lithograph based on a drawing by furi Lisianskii. "The settlement consists ofabout thirty buildings, the principal among which are the church, the barracks, the compting-house, the warehouses, the houses. of the director and the clergyman, the school, and the shops of the handicraft workers: at a little distance are to be seen the habitations of the Aleutians" (Lisianskii voyage). Courtesy University of Washington Libraries.