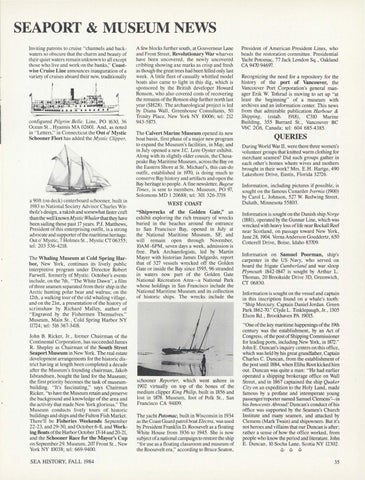 SEAPORT & MUSEUM NEWS Inviting patrons to cruise "channels and backwaters so obscure that the charm and beauty of their quiet waters remain unknown to all except those who live and work on the banks," Coastwise Cruise Line announces inauguration of a variety of cruises aboard their new, traditionally

a 90ft (on deck) centerboard schooner, built in 1983 to National Society Advisor Charles Wittholz's design , a rakish and somewhat fuster craft than the well known Mystic Whaler that they have been sailing these past 17 years. P.J. Matthews, President of this enterprising outfit, is a strong advocate and supporter of the maritime heritage. Outo' Mystic, 7 Holmes St., MysticCT06355 ; tel : 203 536-4218. The Whaling Museum at Cold Spring Harbor, New York , continues its lively public interpretive program under Director Robert Farwell, formerly of Mystic. October's events include, on the 7th, "The White Dawn", a film of three seamen separated from their ship in the Arctic hunting polar bear and walrus; on the 12th, a walking tour of the old whaling village, and on the 21st, a presentation of the history of scrimshaw by Richard Malley, author of " Engraved by the Fishermen Themselves." Museum , Main St. , Cold Spring Harbor NY ll724; tel: 516 367-3418. John B. Ricker, Jr. , former Chairman of the Continental Corporation, has succeeded James R. Shepley as Chairman of the South Street Seaport Museum in New York. The real estate development arrangements for the historic district having at length been completed a decade after the Museum's founding chairman, Jakob lsbrandtsen, bought the land for the Museum; the first priority becomes the task of museumbuilding. "It's fascinating ," says Chairman Ricker, "to have the Museum retain and preserve the background and knowledge of the area and the activity that made New York glorious." The Museum conducts livt(ly tours of historic buildings and ships and the Fulton Fish Market. There'll be Fisheries Weekends September 22-23, and 29-30, and October 6-8, and Working Boats of the Harbor October 13-14 and 20-21, and the Schooner Race for the Mayor's Cup on September 29. Museum, 207 Front St., New York NY 10038; tel: 669-9400. SEA HISTORY, FALL 1984

A few blocks further south, at Gouverneur Lane and Front Street , Revolutionary War wharves have been uncovered, the newly uncovered cribbing showing axe marks as crisp and fresh as though the great trees had been felled only last week. A little fleet of casually whittled model boats also came to light in this dig, which is sponsored by the British developer Howard Ronson, who also covered costs of recovering the remains of the Ronson ship further north last year (SH28). The archaeological project is led by Diana Wall, Greenhouse Consultants, 50 Trinity Place, New York NY 10006; tel: 212 943-5873. The Calvert Marine Museum opened its new boat basin, first phase of a major new program to expand the Museum's facilities, in May, and in July opened a new J.C. Lore Oyster exhibit. Along with its slightly older cousin, the Chesapeake Bay Maritime Museum, across the Bay on the Eastern Shore at St. Michael's, this can-do outfit, established in 1970, is doing much to conserve Bay history and artifacts and open the Bay heritage to people. A fine newsletter, Bugeye Times, is sent to members. Museum, PO 97, Solomons MD l 20688; tel: 301 326-3719.

WEST COAST "Shipwrecks of the Golden Gate;' an exhibit exploring the rich treasury of wrecks buried in the beaches around the entrance to San Francisco Bay, opened in July at the National Maritime Museum, SF, and will remain open through November, 10AM-6PM, seven days a week, admission is free. Park Archaeologists, led by Martin Mayer with historian James Delgardo, report that of 327 vessels wrecked off the Golden Gate or inside the Bay since 1595, 96 stranded in waters now part of the Golden Gate National Recreation Area-a National Park whose holdings in San Francisco include the National Maritime Museum and its collection of historic ships. The wrecks include the

schooner Reporter, which went ashore in 1902 virtually on top of the bones of the medium clipper King Philip, built in 1856 and lost in 1878. Museum, foot of Polk St., San Francisco CA 94109. The yacht Potomac, built in Wisconsin in 1934 as the Coast Guard patrol boat Electra, was used by President Franklin D. Roosevelt as a floating White House from 1936 to 1945. She is now subject of a national campaign to restore the ship "for use as a floating classroom and museum of the Roosevelt era," according to Bruce Seaton,

President of American President Lines, who heads the restoration committee. Presidential Yacht Potomac, 77 Jack London Sq ., Oakland CA 9470 94697. Recognizing the need for a repository for the history of the port of Vancouver, the Vancouver Port Corporation's general manager Erik W. Tofsrud is moving to set up "at least the beginning" of a museum with archives and an information center. This news from that admirable publication Harbour & Shipping, (estab. 1918) , C310 Marine Building, 355 Burrard St., Vancouver BC V6C 2G6, Canada; tel : 604 685-4385.

QUERIES During World War II, were there three women's volunteer groups that knitted warm clothing for merchant seamen? Did such groups gather in each other's homes where wives and mothers brought in their work? Mrs. E.H. Hartge, 490 Lakeshore Drive, Eustis, Florida 3m6. Information, including pictures if possible, is sought on the famous Cunarder lvernia (1900) by Carol L. Johnson, 527 W. Redwing Street, Duluth , Minnesota 55803. Information is sought on the Danish ship Norge (1881), operated by the Gunnar Line, which was wrecked with heavy loss oflife near Rockall Reef near Scotland, on passage toward New York , June 28, 1904. Verna Anderson Goeddertz, 650 Cotterell Drive, Boise, Idaho 83709. Information on Samuel Poorman, ship's carpenter in the US Navy, Âˇwho served on board the frigate Cumberland and war sloop Plymouth 1842-1847 is sought by Arthur L. Thomas, 20 Brookside Drive 3D, Greenwich , CT 06830. Information is sought on the vessel and captain in this inscription found on a whale's tooth: "Ship Mercury. Captain Daniel Jordan. Green Park 1862-70." Clyde L. Tinklepaugh, Jr., 1305 Elson Rd. , Brookhaven PA 19015. "One of the key maritime happenings of the 19th century was the establishment, by an Act of Congress, of the post of Shipping Commissioner for leading ports, including New York, in 1872." John E. Duncan's inquiry centers on this office, which was held by his great grandfuther, Captain Charles C. Duncan, from the establishment of the post until 1884, when Elihu Root kicked him out. Duncan was quite a man: "He had earlier operated a shipping brokerage office on Wall Street, and in 1867 captained the ship Quaker City on an expedition to the Holy Land, made famous by a profane and intemperate young passenger/reporter named Samuel Clemens'~in his Inno cents Abroad! Duncan's conduct of his office was supported by the Seamen's Church Institute and many seamen, and attacked by Clemens (Mark Twain) and shipowners. But it's not heroes and villains that our Duncan is after; rather a sense of how the office worked , from people who know the period and literature. John E. Duncan, 10 Socha Lane, Scotia NY 12302. .i,