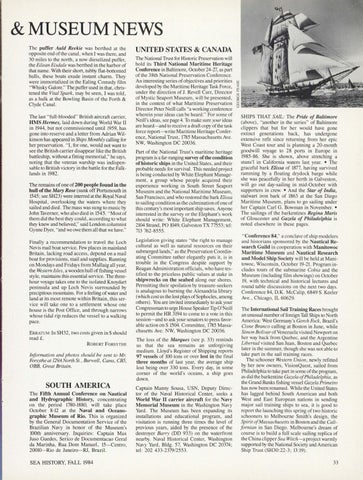 &amp; MUSEUM NEWS The puffer Auld Reekie was berthed at the opposite end of the canal, when I was there, and 30 miles to the north , a now dieselized puffer, the Eilean Eisdale was berthed in the harbor of that name. With their short, tubby flat-bottomed hulls, these boats exude instant charm. They were immortalized in the Ealing Comedy film &quot;Whisky Galore.&quot; The puffer used in that , christened the Vital Spark , may be seen, I was told , as a hulk at the Bowling Basin of the Forth &amp; Clyde Canal. The last &quot;full-blooded&quot; British aircraft carrier, HMS Hermes, laid down during World War II in 1944, but not commissioned until 1959, has gone into reserve and a letter from Adrian Wilkinson has appeared in Ships Monthly calling for her preservation . &quot;I, for one, would not want to see the British carrier disappear like the British battleship, without a fitting memorial ,&#39;&#39; he says, noting that the veteran warship was indispensable to British victory in the battle forthe Falklands in 1982. The remains of one of200 people found in the hull of the Mary Rose (sunk off Portsmouth in 1545; see SH23) were interred at the Royal Naval Hospital , overlooking the waters where they sailed and died. The mass was sung to music by John Taverner, who also died in 1545. &quot;Most of them did the best they could , according to what they knew and believed ,&#39;&#39; said London columnist Gynne Dyer, &quot;and we owe ihem all that we have.&quot; Finally a recommendation to travel the Loch Nevis mail boat serv ice. Few places in mainland Britain, lacking road access, depend on a mail boat for provisions, mail and supplies. Running on Mondays and Fridays from Mallaig all year, the Western Isles, a wooden hull of fishing vessel style, maintains this essential service. The threehour voyage takes one to the isolated Knoydart peninsula and up Loch Nevis surrounded by precipitous mountains. For a feeling of water and land at its most remote within Britain, this service will take one to a settlement whose one house is the Post Office, and through narrows whose tidal rip reduces the vessel to a walking pace. ERRATUM: In SH32, two costs given in$ should read£. ROBERT FORSYTHE

Information and photos should be sent to Mr. Forsythe at 129A North St., Burwell, Cams, CB5, OBB, Great Britain.

UNITED STATES &amp; CANADA The National Trust for Historic Preservation will hold its Third National Maritime Heritage Conference in Baltimore, October 24-27, as part of the 38th National Preservation Conference. An interesting series of objectives and priorities developed by the Maritime Heritage Task Force, under the direction of J. Revell Carr, Director of Mystic Seaport Museum , will be presented , in the context of what Maritime Preservation Director Peter Neill calls &quot;a working conference wherein your ideas can be heard.&quot; For some of Neill &#39;s ideas, see page 4. To make sure your ideas are heard-and to receive a draft copy of the task force report-write Maritime Heritage Conference, National Trust, 1785 Massachusetts Ave. NW, Washington DC 20036. Part of the National Trust&#39;s maritime heritage program is a far-ranging survey of the condition of historic ships in the United States, and their probable needs for survival. This needed project is being conducted by White Elephant Management , a group whose people acquired their experience working in South Street Seaport Museum and the National Maritime Museum, San Francisco, and who restored the bark Elissa to sailing condition as the cu lmination of one of this century&#39;s most important ship saves. Anyone interested in the survey or the Elephant&#39;s work should write: White Elephant Management , 2104 Strand, PO 1049, Galveston TX 77553; tel: 713 762-8555. Legislation giving states &quot;the right to manage cultural as well as natural resources on their submerged lands,&quot; as the Preservation Coordinating Committee rather elegantly puts it, is in trouble in the Congress despite support by Reagan Administration officials, who have testified to the priceless public values at stake in shipwrecks on the seabed along our shores. Permitting their spoilation by treasure-seekers is analagous to burning the Alexandria library (which cost us the lost plays of Sophocles, among others). You are invited immediately to ask your Congressman to urge House Speaker Tip O&#39;Neill to permit the HR 3194 to come to a vote in this session-and to ask your senators to press favorable action on S 1504. Committee, 1785 Massachusetts Ave. NW, Washington DC 20036. The loss of the Marques (see p. 33) reminds us that the sea remains an unforgiving medium . Lloyd &#39;s Register of Shipping reports 97 vessels of 100 tons or over lost in the final three months of last year, the average ship lost being over 330 tons . Every day, in some corner of the world &#39;s oceans, a ship goes down. Captain Manny Sousa , USN, Deputy Director of the Naval Historical Center, seeks a World War II carrier aircraft for the Navy Memorial Museum in the Washington Navy Yard. The Museum has been expanding its installations and educational program , and visitation is running three times the level of previous years, aided by the presence of the destroyer Barry (DD 933) on the waterfront nearby. Naval Historical Center, Washington Navy Yard, Bldg. 57, Washington DC 20374; tel: 202 433-2379/2553.

SHIPS THAT SAIL: The Pride of Baltimore (above), &quot;another in the series&quot; of Baltimore clippers that but for her would have gone extinct generations back, has undergone extensive refit since returning from her epic West Coast tour and is planning a 20-month goodwill voyage to 28 ports in Europe in 1985-86. She is shown, above stretching a stuns&#39;! in California waters last year. • The graceful bark Elissa of 1877, having survived ramming by a floating drydock barge while she was peacefully in her berth in Galveston , will go out day-sailing in mid-October with supporters in crew. • And the Star of India, stalwart iron bark of 1863 at the San Diego Maritime Museum , plans to go sailing under her Captain Carl G. Bowman in November. • The sailings of the barkentines Regina Maris of Gloucester and Gaze/a of Philadelphia is noted elsewhere in these pages. &quot;Conference 84,&#39;&#39; a conclave of ship modelers and historians sponsored by the Nautical Research Guild in cooperation with Manitowoc Maritime Museum and Nautical Research and Model Ship Society will be held at Manitowoc, Wisconsin, October 19-21. Program includes tours of the submarine Cobia and the Museum (including film showings) on October 19, with technical and historical lectures and round table discussions on the next two days. Conference 84, D.K. McCalip, 6849 S. Keeler Ave. , Chicago, IL 60629. The International Sail Training Races brought an unusual number of foreign Tall Ships to North America: West Germany&#39;s Gorch Fock, Brazil&#39;s Cisne Branco calling at Boston in June, while Simon Bolivar of Venezuela visited Newport on her way back from Quebec, and the Argentine Libertad visited San Juan , Boston and Quebec later in the summer, though she was not able to take part in the sail training races. The schooner Western Union, newly refitted by her new owners, YisionQuest , sailed from Philadelphia to take part in some of the program, as did the barkentine Gaze/a ofPhiladelphia, as the Grand Banks fishing vessel Gaze/a Primeiro has now been renamed . While the United States has lagged behind South American and both West and East European nations in sending major sail training ships to sea, it is good to report the launching this spring of two historic schooners to Melbourne Smith&#39;s design, the Spirit ofMassachusetts in Boston and the Californian in San Diego. Melbourne&#39;s dream of course is to build a full scale sailing replica of the China clipper Sea Witch-a project warmly supported by the National Society and American Ship Trust (SH30:22-3; 13:19). 33